Why the Giants are the AFL's most dangerous team

The Giants have awoken from their slumber.

Greater Western Sydney have won seven of their first 13 matches. Unlike the last four seasons, the club must fight and claw its way into the top eight to qualify for finals.

The 2020 season has been a disappointment thus far.

There have been plenty of critics, me included, questioning the game plan and how the Giants have been wired to play this season.

Perhaps the 41-point loss in Round 12 to a youthful Sydney team was the line-in-the-sand moment when everyone chose to give up on GWS for the season.

A slow possession-based style has completely flipped the script on a clearly talented group that was once renowned for its ball movement and ability to carve through opposition zones.

Throughout the season GWS have produced extraordinarily aimless performances that have shown a severely disjointed style of play from defence to attack, at times averaging an incredibly poor disposal-to-inside 50 ratio as well as painfully inefficient results once they got the ball into attack.

The match against Sydney taught us plenty about the Giants and how regimented the coaching appears to have been – they were deprived of space and possession and had no other plan.

The best teams in the league can play in multiple ways.

West Coast’s possession-based style, manipulating defensive schemes by focusing on uncontested marks and forcing plenty of unnecessary defensive lateral movement, has been successful thanks to a midfield group with killer instinct and a knowledge of when to capitalise on an opposition’s fatigue.

With two key forwards who are excellent as lead-up targets and in contested situations, the Eagles can pump the ball inside 50 when needed and then create space for little chip kicks when key defenders are left flat-footed.

GWS haven’t shown enough of that throughout the season – until the club’s last quarter against West Coast and the match against Fremantle.

The incredible persistence in a game plan that looks a completely foreign fit to the personnel available may have ultimately been leading up to a period in time where the club has found a way to make the most of its possession.

Through injury, GWS have reverted back to a two-man key defensive structure with either of Nick Haynes or Aidan Corr playing as the loose depending on how the opposition play.

Phil Davis has been missing for a few games now, and unfortunately Sam Taylor’s horrendous back issues are a long-term issue.

A rotational set-up surrounding the one constant at the moment, Lachie Keeffe, means that the Giants are far more fluid aerially and at ground level.

Earlier in the season, despite some good performances, there were enormous issues with three key defenders playing as well as Nick Haynes, which resulted in Corr adopting the role as the main rebounding option and left other players playing out of position.

Against the Dockers the far simpler rotation through the back six meant that the constant search for uncontested marks and possession weren’t necessarily as aimless as they were previously. GWS weren’t stuck deep in their defensive 50 but rather looking for field position to then rebound through the middle once Fremantle had been manipulated enough.

This was seen in an improved second half against the Eagles, where the match-up was much tougher given the similar approach but the players backed themselves to not concede as much over the back.

GWS looked to control the ball against the Dockers, and with every defensive possession the line got higher and higher.

The Giants began to control the ball a little higher up the ground than we’re used to seeing, which meant Fremantle were on the defensive from outside their attacking 50, a relatively foreign concept for the club over an impressive six weeks.

Lachie Keeffe’s extremely good reach and strength curbed the influence of Matt Taberner and indeed the enthusiasm of Fremantle.

He acts as a pivot for the switch across the ground, and the smaller defensive set-up means he can also utilise a running teammate to make an unexpected move through the middle.

The injuries have allowed Lachie Whitfield to return to a role across halfback that has brought him and the Giants great success, not as a rebounder but as a vessel to get the ball quickly from one end to the other with speed and diagonal kicking.

Zac Williams acts as the resident rebounder in the back six, while Harry Perryman and the returning Lachie Ash were able to find space well outside the defensive 50 to assist in the maintaining of possession.

Far more pace and skill on the ground allows for greater transition once that proverbial switch is ready to be flicked.

Unlike the first half of the season, Greater Western Sydney’s slow ball movement became more calculated and opened the game up for the elite ball users against the Dockers – Perryman, Williams, Ash and Whitfield – to actually get the ball in space and make educated decisions rather than ones that are forced.

The other key change in the GWS structure that suggests things have turned a corner is the inclusion of Jake Riccardi.

Praise has been heaped on the 20-year-old after just two games, having kicked six goals, but what Riccardi represents is far greater than the end product of the goals column.

With Jeremy Cameron, Harry Himmelberg and Jeremy Finlayson, the Giants had three similar types of players with differentiating strengths that didn’t quite mesh.

All three are athletic and good movers, but to expect a consistent run-and-jump effort or to crash packs and definitively bring the ball to ground was a bridge too far.

The way GWS were moving the ball higher up the ground simply didn’t work with a previously impressive trio who need quick ball movement and plenty of space.

Riccardi, on the other hand, had been praised for his blend of intelligent leading patterns with his ability to take contested marks in the VFL, and in his first two AFL matches he has at least been threatening when the ball is in his area.

More focus must be placed on this type of player from the opposition given the aerial threat, which subsequently creates more space in front of the more grounded forward looking for one-on-one contests.

Specifically, Harry Himmelberg’s possessions inside forward 50 were on the opposite side of the ground to where Riccardi was being targeted, while Jeremy Cameron was focused more centrally, creating three different prongs in attack with greater delivery coming in.

Riccardi’s inclusion creates the aerial presence entirely necessary to execute a possession-based style, and it guarantees that small forwards are far more relevant, with more options to bring the ball to ground.

Bobby Hill and Brent Daniels combined for 3.3 in the time they were playing inside the forward 50 and looked more dangerous than at any other stage in 2020.

Whenever Giants talent is spoken about, it is almost always related to the midfield group, which has become younger and subsequently deeper throughout the year. 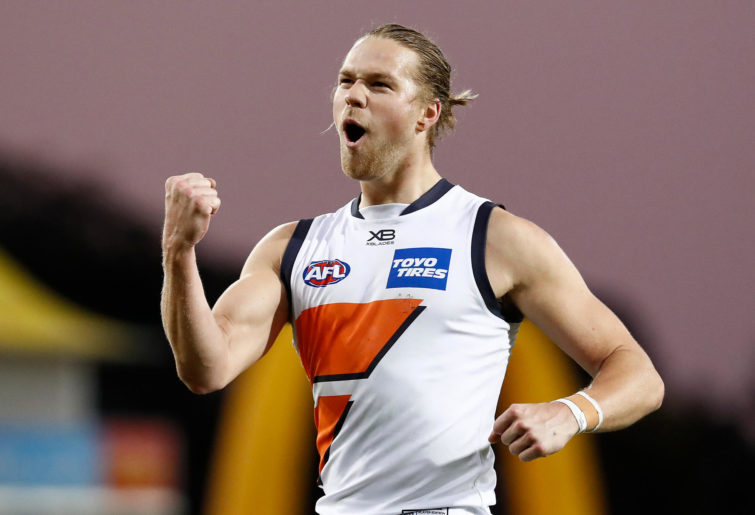 However, the sustainability of the style of play and the selection of an overly tall team was always the necessary focus of criticism.

If anything, the only focus on the midfield group other than the questionable rucks is that perhaps Leon Cameron has been too worried about the congested fixtures, which has resulted in inconsistencies in both centre bounce attendances and form for all except Josh Kelly.

For once, though, we have been able to analyse the Giants outside of their top-tier talent and focus on how Leon Cameron truly has the team playing.

With only four games left in the season, one that has brought disappointment and bewilderment at times, GWS has left it late to really show something.

Maybe that’s what will work best for the club – adopting the moniker of the ultimate underdog having been written off by many.

But Rounds 13 and 14 have indicated a really encouraging sign that GWS now have the ability to execute multiple styles within the same game, which Richmond, West Coast and Collingwood have shown to be enormously important in recent years.

GWS sit outside the top eight as of the end of Round 14 with four games left: Carlton, Adelaide, Melbourne and St Kilda.

Based on what we’ve seen most recently, this is a huge opportunity for the Giants to not only win three or four of their remaining games but to make a genuine statement in what others may perceive to be 50-50 matches with comfortable victories.

GWS should make the finals in 2020, and there is strong potential for a deep run despite all the odds.

Perhaps the dream for the club will be the prediction of a grand final rematch to cap off the season, but right now the Giants need to be consistent with how they play and with what they produce.

There will be plenty of interest in how GWS perform in the final few weeks of the home-and-away season, and a number of teams will be hoping for more hiccups and stagnant play going forward.

The respect doesn’t wash away overnight, and the opposition knows what GWS can produce when playing with confidence.

Watch this space, because the Giants are sleeping no longer.