With only a few weeks to go until the finals, fireworks can be expected when the Sydney Roosters travel down the highway for a Saturday night showdown against the Canberra Raiders in the nation’s capital.

Last Friday night, the Chooks put the Brisbane Broncos to the sword for the second time this season, scoring 58 points as they maintained their place in the top four, just ahead of the Raiders.

It marked the fourth time this century that any team scored more than 50 points in both home-and-away matches against the same opponent, but it was the first time since 1935 that the Roosters achieved the feat (doing it twice that season, against the Bulldogs and North Sydney).

Meantime, the Raiders also continued on their scoring spree, coming from behind at halftime for the second time in three weeks to defeat the Bulldogs 34-20, after they had trailed the wooden spoon contenders by 20-12 at the long break.

They had also trailed the Broncos 8-6 at halftime in Round 14 before scoring 30 unanswered points in the second half to run out 36-8 winners on either side of leading from start to finish to defeat the Titans 36-16 on the Gold Coast.

This will be the second time that the Raiders and Roosters face each other this season, after the Green Machine pulled off an upset 24-20 victory at the SCG in Round 10, gaining some revenge for last year’s grand final defeat against the Tricolours in the process. 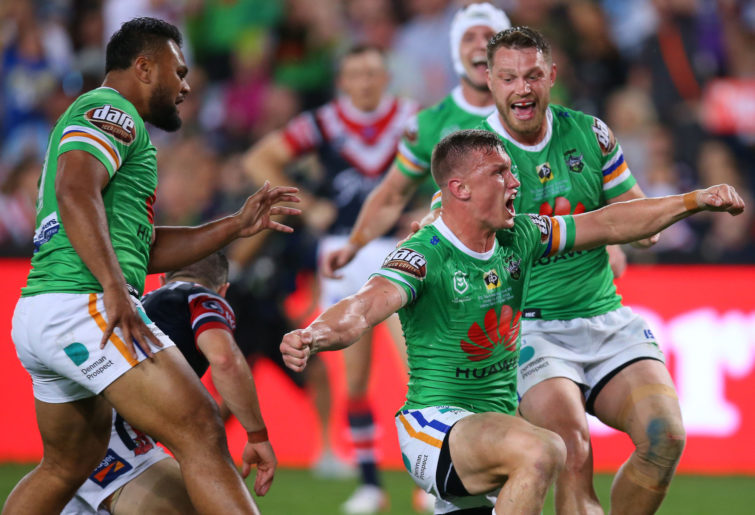 Jack Wighton of the Raiders scores a try during the 2019 NRL grand final. (Photo by Jason McCawley/Getty Images)

Lighting the fuse for this match could be the potential return to the game of Sonny Bill Williams, who has returned to the Roosters at the ripe old age of 35 following Toronto Wolfpack’s withdrawal from the 2020 English Super League season.

SBW’s most recent appearance for the Roosters was in their preliminary final loss to South Sydney in 2014, while he had also featured in their 2013 premiership win, which was his first season back in the NRL after his five-year exile between 2008-12.

The Raiders had planned for his comeback for a while now and it’s been reported that they will push the boundaries to allow for an increased crowd capacity for the visit by the Tricolours this Saturday night.

Up to 3,000 were permitted into the stands for the Raiders’ win against the Bulldogs last Sunday night; previously, the crowd limit was 1,500 (though the attendance for the Raiders versus Dragons game in Round 8 was recorded at 2,500).

Thus you can understand why the Raiders want as big a crowd as possible so as to give SBW a spine-tingling return to the National Rugby League.

The four square meter rule, should it be approved by the ACT government, would allow for a maximum attendance of 6,250, though only members (via a ballot) would be invited to attend, thus shutting off the match to the general public.

And as is the case for Newcastle Knights matches, Sydney-based members would also be barred from attending so as to minimise the risk of a new COVID-19 outbreak in the territory.

The ACT has also had no active coronavirus cases for a while now, but the entire territory was recently declared a COVID hotspot by Queensland premier Annastacia Palaszczuk, who noted that it was being used as a backdoor by Sydneysiders to sneak into her state.

This means that, apart from NRL clubs who haven been flying in and out of the state on chartered flights to play matches, no-one from the ACT, NSW or Victoria can enter the sunshine state for any reason unless it is an absolute emergency.

Back on topic to finish off, and regardless of how many fans are permitted into Canberra Stadium for the grand final rematch this Saturday night, Raiders fans will be out in force, one way or another, just to show their displeasure for the Roosters and Sonny Bill Williams.

Should the Canberra Stadium crowd limit be increased as the club hopes it will be, then it would be the biggest crowd at the venue since Round 1, just before the non-essential mass gathering ban announced by Prime Minister Scott Morrison came into effect in March.

With only three rounds remaining after this weekend, a win will be crucial to either side’s chances of securing the coveted double chance in October, with which comes first-week immunity from finals elimination.

Going into this weekend, the Raiders and Roosters sit in fifth and fourth place on the ladder, respectively, therefore fans can be treated to a genuine pre-finals blockbuster, with every chance that the two sides could face off again on the path to the 2020 NRL Telstra Premiership trophy. 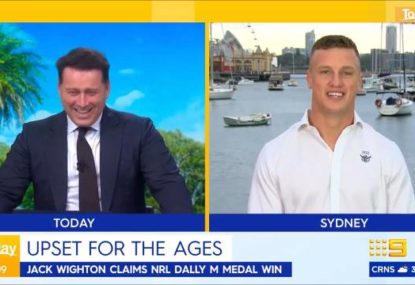 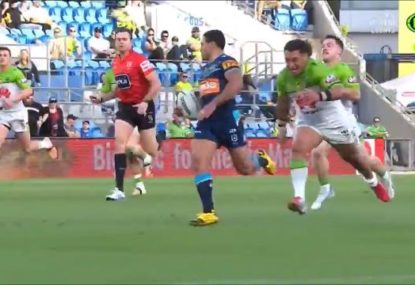