Earlier this year it was announced that Jason Waterhouse and Lisa Darmanin had been selected to represent Australia at the (then) 2020 Tokyo Olympic games in sailing.

The selection followed an incredible period of success for the pair. In 2018-19 the cousins had a run of four out of five international wins, with back-to-back bronze medals at the 2019 and 2020 Nacra 17 World Championships.

After finishing in second place at Rio, Darmanin is hopeful that her and Waterhouse can finish one better in Tokyo next year.

But while you may think that Olympic athletes have a sole focus heading into an Olympic year, this is certainly not the case for Darmanin, who next week will speak as part of AOC ‘Wellbeing Week’ about ‘empowering her passion’.

As a sailor, Darmanin has had the opportunity to travel the world. She calls the ocean ‘her playground’. However, not all playgrounds are as beautiful as Sydney Harbour. 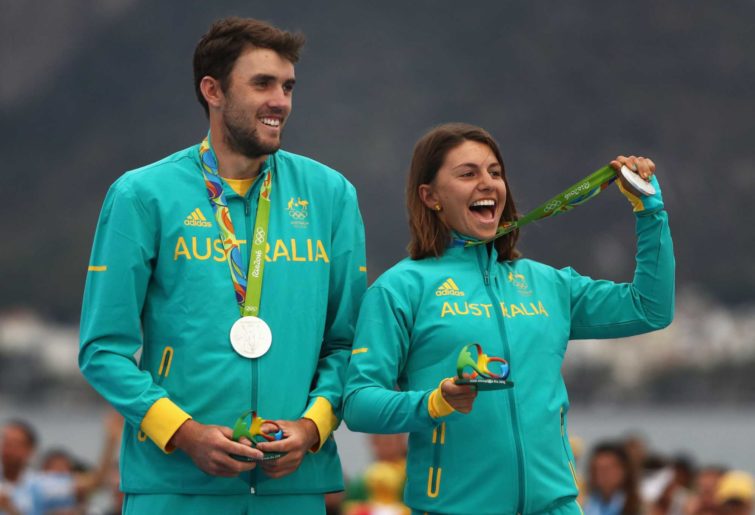 This was something Darmanin saw first-hand in Rio where water quality was a significant issue as reported by the media. That experience had a big impact on Darmanin.

“It opened my eyes and made me really grateful that we have this beautiful harbour in Sydney and that the waterways around Australia are quite well looked after,” said Darmanin.

“But there are some places in the world where it is just devastating. When I was in Rio, I kept imagining what it would have looked like 200 years ago before human pollution and I thought, we can’t let this happen back home.”

“My fear is if we don’t make change now, things will just get worse.”

This experience pushed Darmanin to educate herself about environmental conservation and in particular, what changes we can make to preserve the quality of our waterways.

For many Sydneysiders, water pollution is not necessarily an issue that is front of mind, given how beautiful Sydney Harbour is. But for someone like Darmanin, who is on the water every day, the water quality can vary, particularly following big rain when plenty of rubbish gets washed into drains and then ends up on our waterways.

For Darmanin, seeing this first-hand was another turning point.

“I thought Sydney Harbour was quite clean, but one day we did a beach clean up at a beach that I thought was pristine; but we still found so much rubbish,” said Darmanin.

“Just because you don’t see the problem, doesn’t mean it isn’t there. You might not think it is a problem until you look a little bit closer.”

This turning point pushed Darmanin towards establishing an initiative called ‘Sailors for the Sea’ which is about trying to fix the issue of rubbish in our waterways.

At each stop on the sailing calendar, Darmanin and other sailors dedicate a day to clean up rubbish on the beach to play their part in cleaning up the oceans of the world and making sure they are clean for generations to come.

“This all came about post-Rio. A lot of us were passionate about the oceans before that, because it is our playground, but we saw how destructive humans can be and thought we would make a conscious effort to clean up the places we visit and leave them cleaner than when we arrived,” said Darmanin.

“This initiative is a group of us that are trying to drive change and remind everyone to be conscious of it.”

“As sailors, it is hard because we use a lot of materials. There are some things you can’t avoid, but it is about doing the things you can to reduce your footprint and reuse things as much as possible.”

Whilst Darmanin and other athletes are making a difference around the world, Darmanin still encourages all of us to do our part, because while doing beach clean-up makes a difference, it is a solution but does not address the fundamental problem.

“To put it frankly, a lot of rubbish that ends up washed up on beaches in Sydney is the result of laziness and people not walking those extra few metres to the bin, or thinking that one straw or bottle won’t make a difference,” said Darmanin.

At the moment, we are seeing many athletes supporting a great number of causes, including ‘Black Lives Matter’, mental health and climate change. Sometimes it can be overwhelming to see so many causes and be unsure of how to help.

But for Darmanin, it’s important to remember the impact of small actions.

“It’s hard, because sometimes it is overwhelming thinking that you are recycling and picking up rubbish, but knowing that others are still throwing it away. It’s hard to understand how you can make a difference,” said Darmanin.

“But if one billion people make a difference, then that’s a lot of difference.”

Wellbeing Week runs from 7 September to 11 September and will showcase how Aussies can improve their mental health and well being.

For more information and to tune in to the daily streams head here.