C'mon fellow fans, let's bring back the fun in sport

Team sport – at the heart of it all – is inherently ridiculous. Remember this.

Men and women, boys and girls, and everyone in between across the globe compete in endeavours based on chasing others around a park, trying to kick a ball between posts. Or to be the best at throwing a ball into a ring.

Others throw a small, hard ball towards a person who tries to hit it with sticks of various shapes and sizes. Some simply throw a ball to each other – sometimes forwards, sometimes backwards – to get to the opposite side of a field.

We make up rules, scoring systems and intricate laws that dictate what can and cannot be done, and treat them with utmost devotion.

Because team sport – at the heart of it all – is also inherently serious, especially to those watching it.

There’s an unofficial contract formed between a fan and team upon commencement of supporting. The fan will buy-in – in the literal sense, financially, but more importantly to the fan, emotionally – to a lifelong commitment. In return, that side (and the players in that side) will do everything they possibly can to win.

A sense of disdain and animosity is actively encouraged and fostered by teams and organisations, mostly because it helps the financial bottom-line, but also because it brings about passion in the fans, which brings importance to a contest.

As far as supporters are concerned, aggression is a necessity. Intensity is compulsory. As a result, when a team loses, and fans don’t see or feel that players are as completely devastated as they might be, it can be hard to process.

Which leads us to occasions where NBA players from the Memphis Grizzlies are castigated for apparently laughing and joking around with one another after an – admittedly comical – 61-point loss in 2018.

Or calls for Leicester’s Ben Chilwell to be off-loaded from the club after he was spotted laughing and joking with Chelsea’s Ross Barkley in the immediate aftermath of the Foxes’ loss in the FA Cup this year.

When members of the Brisbane Broncos squad were criticized in the media for socialising with Gold Coast Titans players after the final siren of a loss earlier this season, Matty Johns noted: “It’s just a bad look. The fans are hurting, they want at least to think the players are doing the same.”

Adding to the cycle of late has was Garry Lyon ripping into Hawthorn players for enjoying a conversation with their opponents, dragging out examples of players like James Frawley, Ben Stratton, and James Sicily sharing words with West Coast players and having a smile and a laugh.

“There was a time not that long ago where the Hawthorn Footy Club was the most feared team in the competition and no one wanted to play them,” Lyon said on Fox Footy.

“I want to introduce you to a new team. They are the sociable Hawks.”

Finally, Jordan Lewis picked out footage of Joe Daniher taking a brief time-out to sit on the fence while his teammate was lining up for goal in Essendon’s recent loss to West Coast

“Sitting on the fence (he) probably could’ve only got to the goalline, but if it falls short of the goalline and he doesn’t make that contest, well that’s a serious issue,” the four-time-premiership-player-turned-commentator said.

“He’s lucky the goal went through and it’s as far as the conversation goes, but sometimes it’s not a good look.”

This is the same Daniher congratulated for the sheer excitement and joy he demonstrated during his comeback from long-term injury just last week. 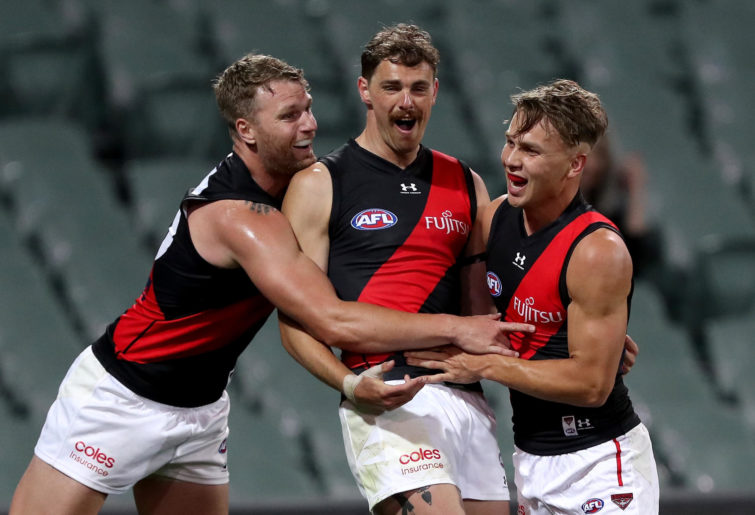 Where does this leave us? An at times rabid fan-base is reminded regularly that sport is so much more than just a game, which leads to all manner of madness across a plethora of fan forums, message boards, and sporting comments sections.

Reading through them you’d think players existed merely for fans to follow and that, by extension, fans are owed something by the players.

Which leads to instances such as Dylan Grimes receiving death threats, Callan Ward being widely abused online for receiving a free-kick towards the end of a game against Essendon earlier this season, instances of racial abuse towards indigenous players, and other such occurrences.

Why? Because team sport is inherently serious business.

But considering the current state of the world, in recognition of how joyful and uplifting sport can be, and mindful of just how bizarre the idea of competition ‘hubs’ are when you really think about it, perhaps we should all just take a few deep breaths and realise that if a player demonstrates that they’re enjoying themselves, maybe we should just enjoy ourselves too.

Because – and you were told to remember this – team sport is inherently ridiculous.

The AFL is in over their head when it comes to how to handle the issue of high contact and concussion. Steven Hocking, the head of football operations, has thus far proven inept at finding and communicating a clear path through an infinitely complex subject matter. Mixed messages from AFL House are nothing new, and […]

The Bombers went down to Tasmania for the first time in 29 years.