Chasing 168 against the Kolkata Knight Riders, the Chennai Super Kings were cruising towards their third win of the season.

With 78 runs required in the final ten overs and nine wickets in hand, the stats were predicting a comfortable Super Kings victory. 60 deliveries later, Kolkata ended up winning the contest by ten runs.

While many may say Chennai’s batting faltered, a lot of credit is due for KKR skipper Dinesh Karthik. Here’s how he pulled off defending 167 on a batting-friendly wicket in Abu Dhabi.

Finishing Pat Cummins’ quota by the 11th over
Having bowled three overs in the powerplay, Pat Cummins was unlucky not to take a few scalps with the new ball. With only one over remaining and KKR needing wickets, Karthik called on his premier quick to cause a breakthrough.

Although Cummins didn’t take a wicket, the Aussie speedster conceded four runs and brought the required run-rate over eight alongside stopping the flow of boundaries CSK had achieved in the past few overs.

Bringing on Sunil Narine very late
This tactic may seem very surprising, but I wasn’t surprised to see Sunil Narine be introduced in the 12th over. With Shane Watson and Ambati Rayudu set at the crease, Narine was the perfect man to contain the pair. Here are Narine’s stats versus the pair in T20 cricket before this fixture.

Narine conceded five runs in his first over as the required run-rate crept up to 8.7. The following over, Rayudu would hole out to long-on for 30. With Karthik bringing on his two best bowlers in the 11th and 12th over, they had created scoreboard pressure to force a mistake out of the CSK batsmen.

Narine’s second over would see the West Indian maestro dismiss Shane Watson for 50 and both set batsmen for CSK were gone in quick succession.

Another reason Narine was kept back was to keep MS Dhoni quiet, and keep him quiet he did. The former Indian skipper failed to pick Narine, scoring one run in the four balls he faced Narine. Dhoni’s T20 stats versus Narine are woeful – 39 runs, 80 balls, two dismissals, 19.5 average, 48.75 strike rate.

To date, Dhoni has never hit Sunil Narine for a boundary in T20 cricket. Thus, keeping Narine for the back end was a sensible tactical ploy. 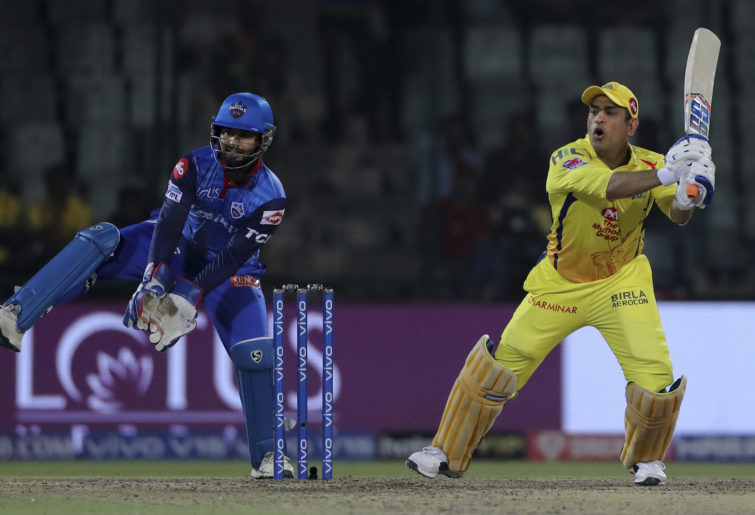 Chennai’s MS Dhoni at the crease in the IPL. (AP Photo/Altaf Qadri)

Bowling out Varun Chakravarthy
From 78 runs needed in ten overs, CSK needed 64 off 36. With Narine still having two overs left, Dinesh Karthik had to get four overs out of Andre Russell (who could mathematically bowl three overs max) and one out of Shivam Mavi, Kamlesh Nagarkoti or Varun Chakravarthy.

Despite not bowling convincingly in his first two overs, Chakravarthy was handed the ball.

The mystery spinner held his nerve, conceding six runs in the 15th over. Karthik rewarded Chakravarthy for his accuracy with another over in the 17th over. Despite MS Dhoni slamming Chakravarthy through point for a boundary, Chakravarthy fearlessly tosses a doosra at the stumps.

Dhoni swung and missed. The ball crashed into middle stump, and Dhoni was bowled for 11. After dismissing Dhoni, Chakravarthy offered no width for Kedar Jadhav to swing his arms – resulting in four consecutive dot balls and CSK requiring 39 off 18.

In his first two overs, Varun Chakravarthy conceded 17 runs. His final two overs would yield 11 runs and MS Dhoni’s wicket. Hailing from the same state as Dinesh Karthik (Tamil Nadu), Chakravarthy has made a name for himself with his eight variations in the Tamil Nadu Premier League and List A cricket.

Karthik has backed Chakravarthy throughout this season, selecting him as Narine’s spin-twin over left-arm wrist-spinner Kuldeep Yadav in the past few matches – and the spinner repaid his skipper’s faith by holding his nerve in the crucial overs.

KKR find themselves at third after five games, but they still have a long way to go if they want to challenge for a top-two spot and get two bites at the cherry in the IPL playoffs. However, defending 167 on a batting-friendly surface will have given the KKR team a lot of confidence as they move forward into the latter stages of the tournament.

As for Chennai, there are a lot of problems on and off the field that they need to address or else they’ll fail to qualify for the playoffs for the first time in their history.