It's a Bledisloe weekend, but watch the women too

Sure, this week is all Bledisloe-focused and rightly so. Test rugby, new coach, new players – despite years of pain and anguish there is still that strange and despairing feeling of hope.

However, I feel the need to bang the drum again about Oz rugby’s women. I understand for some it’s boring, why bother, they are less skilled, blah, blah, blah which is fine. But serious credit goes to the women’s sevens again who by playing rugby league have provided rugby with great PR coverage in the mainstream media and social media channels.

It is coverage rugby would never have received, and we need as much as we can get to promote the sport.

Until last weekend I had watched very little rugby league this season, partly due to the fact I have found it a bit boring over the last couple of years plus my team hadn’t done particularly well.

But being a long time supporter of the women in sevens and 15s I was very keen to watch them have a crack at league – a quick glance of the squads revealed there are around 15 current and former sevens/15s players. I expected they would shape up pretty well, but actually they did better than I thought they would (while not being critical it probably shows that league is a lot tougher and physical, but it’s not that technical).

What was amusing was listening to the commentators who were stuck between a rock and hard place – praising the sevens women and therefore NRLW but not wanting to praise them too much.

Obviously leading up to and after the games there was a lot of focus on Charlotte Caslick and Ellia Green, who are both stars and naturally performed extremely well for their first game of league. I also need to reference Vani Pelite, who is an unsung hero of the sevens squad and had an outstanding game for the Warriors in both attack and defence.

But there were plenty of others including Super W players such as Shanice Parker, Kennedy Cherrington, Lavinia Gould and Millie Boyle who all more than held their own.

A quick look at some stats and the rugby women in the top five: 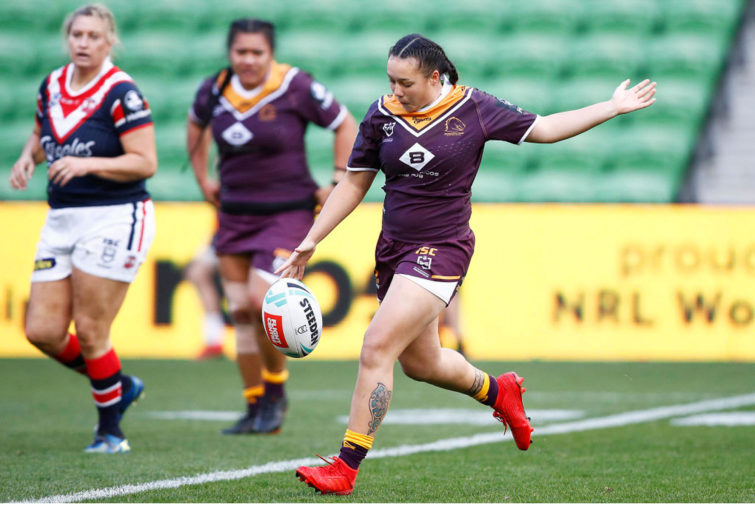 I also have to note that while Caslick is seen as the attacking gun she is, her defence is often underrated – she made more tackles than any other back.

Often Rugby AU is a popular punching bag and at times rightly so, but a double credit must go to them – firstly, for permitting the sevens women to play NRLW – noting that New Zealand rugby strongly turned down a similar approach by the Warriors – a couple of the New Zealand sevens women were keen to have a crack.

Secondly, it showed the quality of the women’s sevens program in producing highly skilled and footy smart athletes, a program that probably does not get the recognition it deserves. Unfortunately, it is by playing another footy code that rugby sevens and the players are getting credit.

I know on Saturday there is the Shute Shield, Premier Rugby, Jack Scott and the like but as a prelim to Sunday’s Bledisloe, have a look at the rugby women in action especially the first Roosters versus Warriors game – you have Caslick, Meakes, Parker, Cherrington, Southwell, Zahara Temara and Grace Hamilton versus Green and Pelite.

It will be a good game to watch.