They are bowling balls carved seemingly in basketball nirvana, built for righteous shot-blocking and swagger-filled cleaning of the glass. And, as of 2020, following a 16-year quest to climb the NBA’s highest mountain, they were crafted to hold up the Larry O’Brien Championship Trophy.

For obvious reasons, much of the fall-out from the revamped Los Angeles Lakers’ 4-2 triumph over the gallant Miami Heat surrounded the latest chapter in the Michael Jordan versus LeBron James GOAT debate.

However, while James once again beat Father Time and his attempts to slow down the ageing superstar, it’s Dwight Howard who’s the real Finals MVP.

A former number one pick in the 2004 NBA Draft and one of just a handful in recent years to be picked straight out of high school, Howard spent portions of this year’s play-offs rekindling memories from his Magic years when he was collecting the souls of those brave enough to venture within spitting distance of the rim.

More importantly however, he showed that he’d swallowed the alleged Superman-sized ego that saw him bounce around five teams in three years prior to landing for the second time at the Staples Centre.

He is an eight-time All Star, five-time All NBA First Team, three-time Defensive Player of the Year and future First Ballot Hall-of-Famer. It’s fitting that Howard clinched his maiden title with the Lakers, seeing as it was Los Angeles who made a mess of his first foray to the NBA Finals in 2009 – a year when Howard carried the Orlando Magic on his ample shoulders to the tune of 18.3 points, 13.2 rebounds and 2.8 blocks a game.

This was not long after the 2008 Dunk Contest where Dwight Howard turned the New Orleans Arena into his own personal phone booth. He donned a Superman cape and turbo-dunked his way into the pages of the NBA’s history books. There was seemingly nothing that could stop Howard from wreaking havoc on the league for years to come.

However, after leaving the Magic in 2012 he bounced from a troubled one-year stay at the Lakers (dubbed the ‘Dwightmare’) into a four-year run at Houston, before seeing single seasons at Atlanta and Charlotte, then being waived without playing a game in Brooklyn, then lasting nine games before bowing out with injury at Washington, and surviving another waiving from Memphis – a rebuilding team who never had any intentions of playing the ageing veteran.

Locker-room discontent became the punchline to any joke you wished to throw the way of Howard, with his ability to butt heads with coaches, teammates and anyone in the general vicinity of the basketball court being legendary.

Then, just as it seemed that his immense ability to jackhammer alley-oops lobbed anywhere within a six-foot radius of the ring, grab rebounds with impunity and aggressively out-body opposing big men was going to waste, James and his rag-tag Lakers squad offered him a chance following DeMarcus Cousins’ season-ending injury. 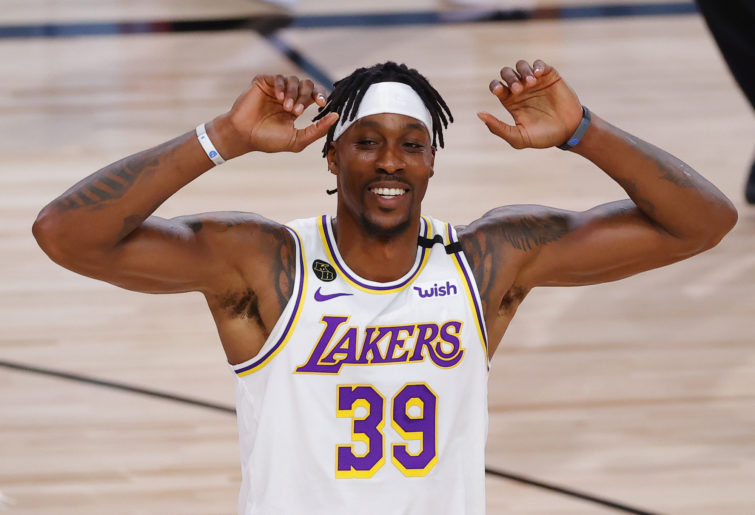 The transition from brash centerpiece of an organisation to a team-first, energy-bringing bench player was a fascinating experiment and one that captured the attention of any long-term NBA aficionado. Indeed, the Western Conference semi-final match-up with Houston’s small-ball squad saw Howard confined almost entirely to the bench – a test that would surely show if there were any cracks in the daily double’s commitment to his new role.

And his physicality, offensive rebounding and ability to get under the skin of Jokic – and the rest of the Denver squad – catapulted the Lakers to a comfortable 4-1 series win.

Against the Bam Adebayo-less Heat in Games 2 and 3 of the NBA Finals, Howard had little to do. He had even less in Games 4 and 5 once the Lakers adapted tactically to the inspired moves of Erik Spoelstra. However, he didn’t need to do anything. He’d broken the wave of unstoppable comeback momentum the Nuggets had gathered, completed his turn from a heel to a much-loved face, and embraced his standing as a horses-for-courses role player.

The last act in Howard’s 2020 redemption arc was to drain a three-pointer with 20 seconds remaining in Game 6. It was his first ever playoff three-pointer, and just the tenth of his entire career. Let that sit for a long moment. Then go back to celebrating the real Finals MVP.