Unwanted and unloved, the Paralympics would not have been held without the determination of a small group of Australian Paralympic officials.

The first Paralympics took place in 1960, sharing cities, but not venues, with the Olympics in 1960 and 1964, after which the host cities separated for 24 years. The Paralympics were vital for disability sport but were a niche event, with as much focus on showcasing the rehabilitation of people with disabilities as sporting excellence.

By the Barcelona Games, the Sydney, New South Wales and Australian Governments were well into a determined campaign to bring the Olympics to Sydney. Despite approaches from Paralympic representatives, the NSW Government and the Sydney Olympic Bid Committee (SOBC) were uninterested in bidding for the Paralympics, believing they could be added if Sydney secured the Olympics.

However, all of Australia’s rivals for the Olympics were also mounting Paralympic bids and by late 1992 it became clear that the International Olympic Committee considered a Paralympic bid as an important adjunct to an Olympic bid. 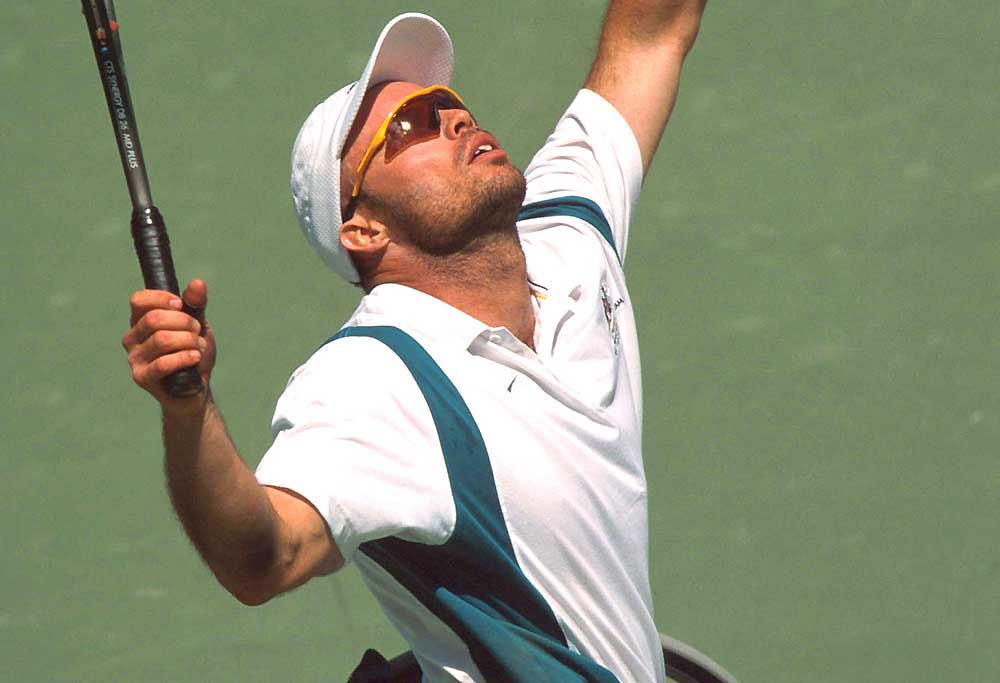 Dave Hall, on his way to gold at the Sydney Paralympics. (Australian Paralympic Committee / Wikimedia Commons)

Its President, Juan Antonio Samaranch, had supported the Barcelona Paralympics and helped ensure their success and made clear his encouragement for closer ties between the two events. In response, the SOBC offered “its support to the Australian Paralympic Federation (APF) in submitting a bid to the IPC to host the Paralympic Games in the year 2000 should Sydney’s Games bid be successful”.

The APF had been founded just two years earlier and had one full-time employee, executive officer Adrienne Smith. Led by Smith and its President, Ron Finneran, it scrambled its meagre resources to prepare a bid in the three months before it was due for submission.

The commitment from the SOBC and the NSW government can be judged from the numbers: $15m was offered to the APF to conduct the Games itself, out of a draft budget of $84m and a projected shortfall of $60m; one administrator from the SOBC joined nine APF representatives at the final bid presentation to the International Paralympic Committee, compared to a complement of 70, including the Prime Minister and the NSW Premier, at the final presentation of the Olympic bid.

With the NSW government refusing to underwrite the Paralympics beyond a contribution of $15m, the Sydney Paralympic bid team was preparing to withdraw its bid at the final presentation, which was a week ahead of the Olympic decision, when the SOBC representative on the delegation, Bob Elphinston, announced to the IPC that: ‘Negotiations are well advanced for the state and federal governments to meet the shortfall of costs for the Paralympic Games in accordance with the budget presented in the Paralympic bid documents’.

After the Paralympics were awarded to Australia, based on Elphinston’s somewhat ambivalent promise of funding, the IPC President, Robert Steadward, told the Australian media that NSW Premier John Fahey had personally guaranteed him that he “would come up with the goods”. Fahey dampened the moment by retorting that “he had not come up with the goods” and “he assumed the federal government would be more generous than he was going to be”.

Fahey’s reaction was heavily criticised. The Sydney Morning Herald ran with the front-page headline: ‘Fahey’s surprise: a bill for the Paralympics’. A Bill Leak cartoon showed Fahey jumping for joy when Sydney won the Olympic Games, and then crashing on his face when he found out it also won the Paralympic Games’. With an international audience looking on and a public opinion backlash, the NSW and federal governments negotiated to share the predicted financial shortfall for the Paralympic Games.

However, unlike the Olympics, the Paralympics would not be unconditionally underwritten – the governments each committed a fixed sum.

The Sydney Paralympics had begun life as the orphan that no-one in government wanted to adopt. Yet when the Games ended on 29 October 2000, they had become the golden child that inspired Australia and the world and changed Paralympic sport forever.

Sports can provide great and memorable moments, and in 2016 it provided plenty of those.