The ‘Son of God’, in his 357th and final AFL game, was hoping to ride into the sunset with his third premiership medallion, while Joel Selwood was hoping to become a four-time premiership Cat and Patrick Dangerfield was attempting to win a flag in his first grand final.

The Cats had gone into the match having ended their preliminary final curse the previous week by defeating the Brisbane Lions at the Gabba, which denied the locals the once-in-a-lifetime opportunity to win a flag in their very own backyard.

But for all the talk of a potential fairytale premiership, they found the Richmond Football Club and a certain player called Dustin Martin a mountain too far to overcome, going down by 31 points in the first AFL grand final to ever be held outside of Victoria.

A second wave of coronavirus infections in the state made it logistically impossible to stage the decider in a COVID-safe way at the MCG, so therefore the landmark call was made last month to stage the game at the Gabba in the prime-time evening timeslot.

Those who were lucky enough to witness this historic occasion in Brisbane were treated to a beauty, with both the Tigers and Cats testing each other over the course of four exhilarating quarters of football.

The Tigers, who were playing in their third grand final in four years, were first to strike when Dion Prestia booted the game’s opening major over 20 minutes into the first quarter.

Richmond fans would’ve had every right to feel nervous thereafter, as in the preceding six years, the first goalkicker of the grand final had gone on to lose the match.

Earlier, there was drama as Tiger Nick Vlastuin and retiring Cat Gary Ablett Jr copped injuries within seconds of each other – with the former copping a stray forearm from Patrick Dangerfield and Ablett injuring his left shoulder which he had reconstructed in 2014.

While Vlastuin’s match was declared over, Ablett was able to play out proceedings and did all he could to inspire his side.

After the Tigers got another goal through Kamdyn McIntosh, the Cats hit back with a pair of their own to lead by the barest of margins at the first change of ends.

The Cats dominated the second quarter, kicking three goals – through Dangerfield, Sam Menegola and this year’s Coleman Medallist, Tom Hawkins – to lead by 22 points, at which stage the Tigers were on the ropes and were seriously being challenged.

However, Dustin Martin was able to peg back a goal in the shadows of halftime to see his side only 15 points down at the long break.

At this stage, the Tigers needed to overturn a near-century hoodoo if they were to win its 13th flag, having not won a grand final after trailing at halftime since 1921.

But if the club’s fans needed any hope, it was that they recovered from a similar deficit against the Cats in last year’s preliminary final, whereby they came from 21 points down at halftime to win by 19 points.

The Tigers came out roaring in the second half, with goals to Jack Riewoldt and Jason Castagna seeing them trail by just three points, before the Cats steadied with a goal to Gryan Miers to see them lead by eight points.

Another two goals saw the yellow-and-black machine take a two-point lead into the final change of ends, and with one quarter of the 2020 season to play it was still anyone’s flag to win.

Three goals in fifteen minutes all but sealed the title for Richmond, and while Menegola pegged back a goal for the Cats to give them some hope, another two goals to Jack Riewoldt and Dustin Martin saw the premiership head to Punt Road Oval for the third time in four years.

Martin continued to show why he was born to play on the AFL’s biggest stage, claiming the Norm Smith Medal for a record third time after kicking four goals and gathering 22 disposals in another clear best-on-ground performance. 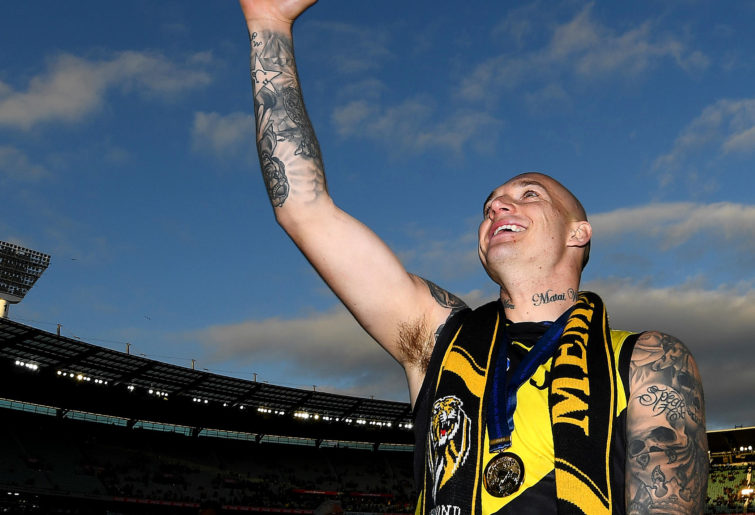 Cotchin, meantime, became the first man in Richmond’s history to captain three premiership sides, while he also became the third triple-premiership winning captain this century, after Michael Voss (2001-03 with the Brisbane Lions) and Luke Hodge (2013-15 with Hawthorn).

And four years after very nearly copping the axe after a horror 2016 season, coach Damien Hardwick has joined elite company, joining the likes of Kevin Sheedy, Leigh Matthews and Alastair Clarkson in winning at least three flags as a coach.

Further, it was also his fifth premiership as either a player or coach, having featured in Essendon’s all-conquering 2000 premiership side as well as in Port Adelaide’s 2004 premiership team.

He was also an assistant coach in Hawthorn’s 2008 premiership side coached by Clarkson, so overall he has now been involved in six AFL premierships.

Hardwick paid tribute to club CEO Brendon Gale, saying “the easiest thing for him to do at the end of [the] 2016 [season] was to sack me”.

The club was in a dark hole four years ago, having had their 2016 season ended in a 113-point humiliation at the hands of a powerful Sydney Swans side at the SCG.

There were very strong doubts as to whether Hardwick, who to that point in time had failed to coach a finals victory for the club, would continue in a role he had held for seven years.

As for the Geelong Cats, it was a disappointing end to a season that had promised so much, and not only did Gary Ablett Jr not get the farewell gift he craved for, Joel Selwood also missed out on his first premiership as a captain, while Patrick Dangerfield also missed out. 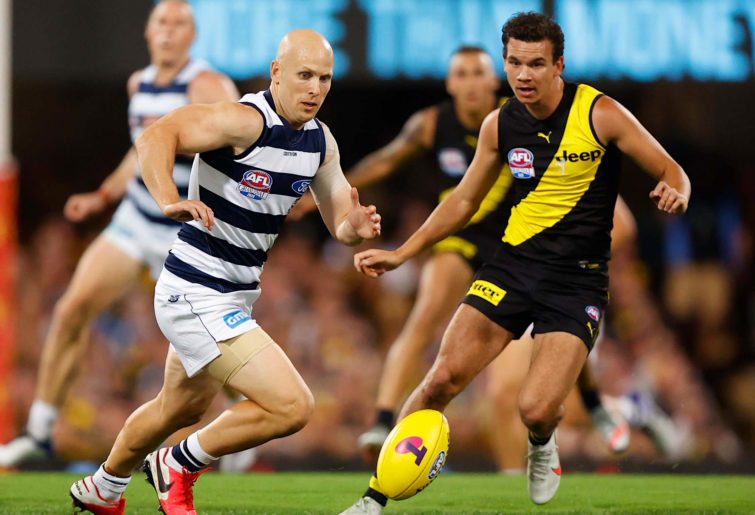 Selwood was captaining the Cats for the 200th time and, being the only survivor from each of their 2007, 2009 and 2011 flags, was also attempting to become the first ever four-time premiership player for the club.

Four years after arriving at the club from the Adelaide Crows, Dangerfield endured a quiet grand final, but just to play in one after over 250 AFL games was a testament to his determination and desire to succeed in this game.

That brings to an end what will forever go down as one of the most significant and challenging seasons in over 150 years of VFL/AFL history.

When the second wave of coronavirus infections hit the state of Victoria, all ten state-based clubs were forced to evacuate, with the Tigers shifting base to the Gold Coast, and the Cats going all over the place, first to Sydney, then to Perth and finally to the Gold Coast.

At that stage, the players didn’t know how long they would be away for, with estimates that they’d be away for up to a month or two.

But as the COVID-19 situation in Victoria deteriorated, it became obvious that the players would be forced to spend the remainder of the season away from the comforts of their own beds, with no further premiership matches being played in the state after round five.

Tigers coach Damien Hardwick had already stated that this year’s flag would be “the greatest premiership ever won”.

And it’s his side that have emerged victorious of them all after a season that will forever be spoken of in VFL/AFL history.

It all started on Thursday, 19 March with the annual season-opening blockbuster between the Tigers and Blues that was played without a single soul in attendance at the MCG, after a ban on non-essential public mass gatherings was imposed by the government in response to the coronavirus crisis.

In the intervention, the season was put on hold for nearly three months, various states closed their borders and introduced quarantine measures in an attempt to keep COVID-19 out of their states, and the whole nation went into near-complete lockdown. 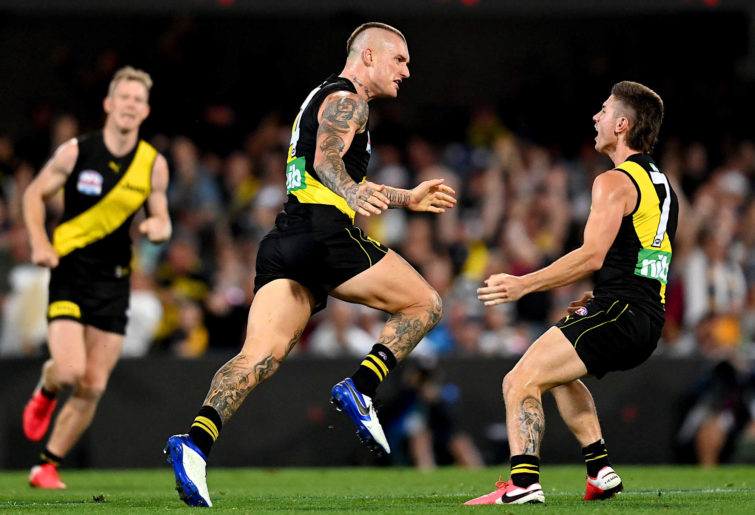 The season resumed on 11 June 2020, but with matches still played in empty stadiums, before the aforementioned COVID-19 outbreak in Victoria proved a major impediment to the season being completed.

But somehow, we have finally managed to crown a premier for the 2020 season, and with the coronavirus situation in Australia much better than it was when the season started, the expectation is that we will be back to normal by the start of next season.

This should mean that the 2021 season should start with the annual blockbuster between Carlton and Richmond at the MCG, in what would be the venue’s first match since July 5 this year.

However, it is expected that WA’s hard border, which also proved to be an impediment in the AFL’s 153-game home-and-away journey, will still remain in place by the start of next season, which could force the West Coast Eagles and Fremantle into an early-season away hub.