Queensland’s biological incapacity to misunderstand Origin is under question following a disastrous Game 2 defeat, with scepticism re-emerging towards their otherworldly dedication, mateship, and all the other qualities that make us New South Welshmen crook.

And in good news, I can confirm it is all bunkum.

In fact, most of Queensland’s iconic gutsy moments were created from luck, hyperbole, or most satisfyingly, the Blues’ ineptitude.

Allan Langer’s comeback
Hardly the logistical masterstroke everyone makes it out to be. It was pre-border restrictions, and Queensland probably just lured him with fullback money. And besides, he wasn’t even the best player on the field that night because Channel Nine gave the man of the match award to Daly Cherry-Evans.

Mark Coyne’s miracle try
C’mon everyone. It was the end of the game. The Blues were tired. And besides, they would’ve had it easily sewn up if Gerard Sutton correctly blew full time after 79-and-a-half minutes.

Fatty Vautin’s Neville Nobodies win 3-0
Not a thing. This team was actually chock full of first graders, some even from rugby league.

Eight-in-a-row
Contrarily, involved a side not full of first graders.

Johnathon Thurston heroically celebrates in wheelchair
More health and safety bureaucracy gone mad. Thurston was only in the chair because he lost use of his leg due to a suspected ACL.

So why all the fanfare? He’s got two of them, so he should’ve got on with it. You wouldn’t hear Shaun Timmins complaining. Although that could be due to the sound of grinding calcium. 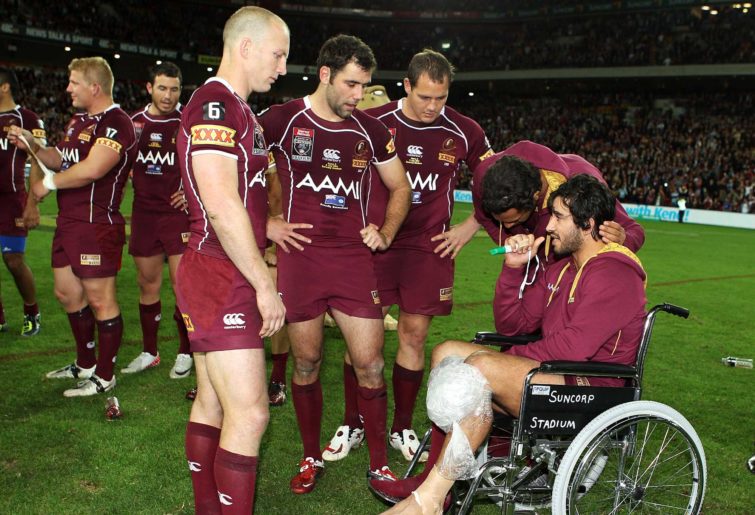 Wally Lewis’ 1989 Game 2 masterclass
Apparently this was ‘incredible’ because Lewis single-handedly carried the depleted Maroons to victory after the side endured another shocking spate of embellished injuries.

But just because a side is down to 12 men and in drastic need of reinforcements and magic, it shouldn’t qualify as folklore simply because the coach failed to pick Kurt Capewell.

Artie Beetson belting Mick Cronin
This wasn’t a watershed act to rally a state in to the unending grip of a 40 year grudge. It was because Crow allegedly replaced Artie’s phone on the charger with his own when the big fella’s was only at 67 per cent. Should’ve hit him twice as hard, if anything.

Other miscellaneous inexplicable comebacks from the dead
Every incredible Queensland rebound from the grave is as boringly predictable as the last. That’s because NSW is contractually obligated to relinquish any comfortable and unassailable lead once Phil Gould claims the Maroons are “out on their feet.”

Wally’s retirement
Lewis – the Maroons icon and Nine news reader – waited until moments before kick-off in the 1991 decider before announcing his retirement to inspire his teammates to a stirring victory. Proves Channel Nine will do anything for ratings.

Billy Moore’s ‘Queenslander’
Hearing a Northerner shrieking his mailing address as he crosses a white line is nothing extraordinary in the time of border checkpoints. And besides, it wasn’t even an impulsive display of state passion, as the call was originally coined years earlier by Paul Vautin.

I even pressure-tested its efficacy while under the extreme strain of a driving test, and the only thing it spurred me to try was a head wobble and different mini skirt.