It’s been well mentioned that the Blues have not won a decider in Brisbane since 2005 and the streak continues.

Despite what was dubbed as one of the weakest teams in Origin history, Queensland proved that no matter who puts on their jersey, they have developed a next man up mentality inspired by a culture which has transcended over eras.

While the scoreline suggests that it was a close encounter throughout the match, it does a disservice to Queensland’s overall performance.

The Maroons had dominated in multiple facets of the game. To be fair, the Blues did extremely well to hold out the Maroons to give themselves a chance. However, it could have been a larger deficit as some poor errors from Valentine Holmes at the tryline gave New South Wales life.

When you reflect on the Blues’ performance, they had one fortunate try come from a simple error conceded by Corey Allan. Then they had some nice linkup play allowing Daniel Tupou to score.

Queensland had 57 per cent possession throughout the game, and it seemed like they were on the front foot for the majority of the game especially in the first half. While some could say that the Blues didn’t have enough ball in the Maroons’ half, you have to give Queensland credit for limiting and shutting the Blues down.

Analysing the numbers further, the Maroons dominated the running metres and post-contact metres, making seven extra metres on average each set which adds up. Additionally, Queensland was causing havoc for New South Wales’ defence, producing 16 offloads to eight as well as five line-breaks compared to two for the Blues.

As I mentioned in my Game 3 preview, you had to expect that Queensland were going to come out firing at home, which is exactly what they did. It was always going to take a strong performance to dispatch Queensland and while they didn’t perform as badly as Game 1, the Blues just didn’t look likely. 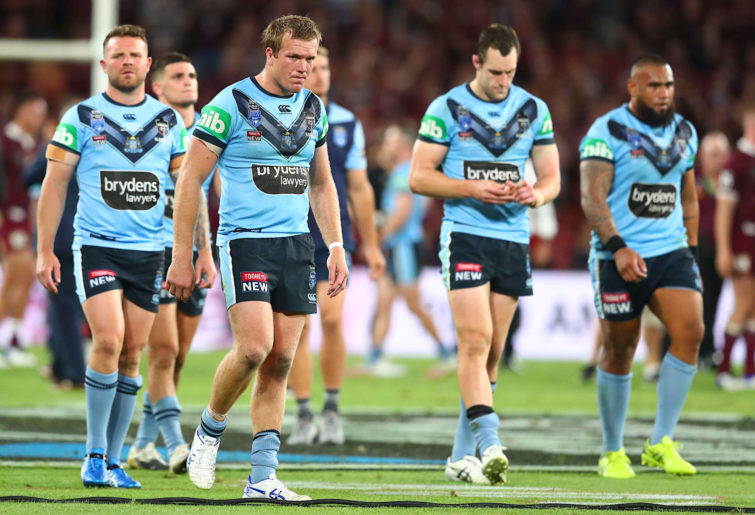 Even for the majority of Corey Allan’s sin-bin, there didn’t seem to be any genuine scare placed on the Maroons’ defence.

James Tedesco leaving the field with concussion 19 minutes into the game will always bring up question marks over the potential outcome. Similar to Cameron Munster’s absence in Game 2, the gigantic task to overcome Queensland was always going to be tougher.

Seeing Isaah Yeo cover at centre wasn’t pretty and Clint Gutherson at fullback did as much as he could despite not being able to provide the attacking flair Tedesco does.

While the playmakers and outside backs were on fire in Game 2, it didn’t translate into Game 3. Nathan Cleary tried to be an aggressive threat with the ball and with his kicking game but to no avail. He had 19 runs during the game which was the most for any player on the night. On the other hand, Cody Walker was neutralised in Game 3 and was ineffective as the Maroons defence shut him down.

For the most part, New South Wales just couldn’t string together a consistent stretch of football which allowed them to attack Queensland in their territory. They were given opportunities such as Munster’s kick-off which was out on the full at 6-6 as well as Cleary’s 40/20 kick. Moreover, they had numerous opportunities down Queensland’s half where they made costly errors at crucial times.

One major concern would be the lack of impact that the Blues forward pack had. The whole series has relied heavily on their talented backline. While the outside backs haven’t stepped up in crucial moments, it’s the forwards that haven’t lived up to their potential to support the spine.

For the Maroons to secure a Game 3 victory, Munster was always going to be called upon to step up. He’s a big-game player who manages to conjure an opportunity out of nothing. His involvement in the leadup to Edrick Lee’s try late in the first half was a huge blow to the Blues and showcases Munster’s brilliance.