The Bulldogs have been around since 1935, and since the club’s inception over 800 players have worn the famous blue and white strip. Once known as “the Berries”, the now more formidably named Bulldogs have had some great players grace their home turf over the years, with 13 players notching up more than 200 games for the club.

But do you remember the players who had but short careers with the Dogs?

Here’s a team made up of players who played just a handful of games for the club since the mid-60s.

1. Greg Barwick
Barwick was a Canterbury junior and a versatile outside back who made his first-grade debut for the club in 1988, playing six first grade games over the 1988 and 1989 seasons. He then moved on to Penrith, Norths and Balmain before eventually heading overseas to play with the London Broncos.

2. Michael Lett
Lett was one of the fastest players to ever lace on a boot, but sheer speed just wasn’t enough in the long run. An Australian Schoolboy and Junior Kangaroo representative, Lett only managed to be selected in 14 first-grade games in a six-year NRL career, the last three of those with Canterbury-Bankstown in the 2011 season.

3. Darren Brown
A South Sydney junior, Brown was a very good player who carved out over 200 games at the top level in a 12-year career, both in Australia and England. His only season with the Bulldogs came in 1991 when he turned out in nine first-grade games for the club.

4. Paul Mellor
A big, hard-running outside back, Mellor was another South Sydney junior to find his way to Bankstown. He had ten top-level games with the Dogs in the 1997 and 1998 seasons and a first-grade career of over 260 games. After retiring from the game, he became a first-grade referee.

5. Troy Clarke
Another talented player who didn’t enjoy much success in the NRL, Clarke was part of the Newcastle squad in their inaugural season in 1988 before coming to the Bulldogs for nine games in the 1992 season. He then went on to play a couple of seasons in England before returning to the Newcastle competition.

6. Scott Hill
Hill probably needs no introduction – 12 games for Australia, five origins for NSW, 245 career games including 177 for the Storm, but does anyone remember the five games he played for the Bulldogs in 1996 at the age of 19? This is one big fish that got away from the Dogs.

7. Shane Perry
Perry was a useful half who made a couple of starts in the NRL but never cemented his position. After making his debut for Wests in 1999 he played the next two seasons with Canterbury, appearing in just six top-level games.

He then headed back to the Queensland competition for a few years before being called up by the Broncos, where he played over 40 games over the next three years.

8. Terry Leadbetter
Leadbetter was a rough-and-tough prop who rose to fame as part of the uncompromising Wests forward pack in the 1979 to 1982 seasons. He joined the Bulldogs for the next two years but only appeared in four first-grade games before heading back to Wests and then to Parramatta where he finished his career.

9. Damien Cook
Another one that got away. Cook came to the Bulldogs from St George in 2014 and was selected in just seven first-grade games over the next two seasons. He then signed with Souths in 2016 and the rest is history. 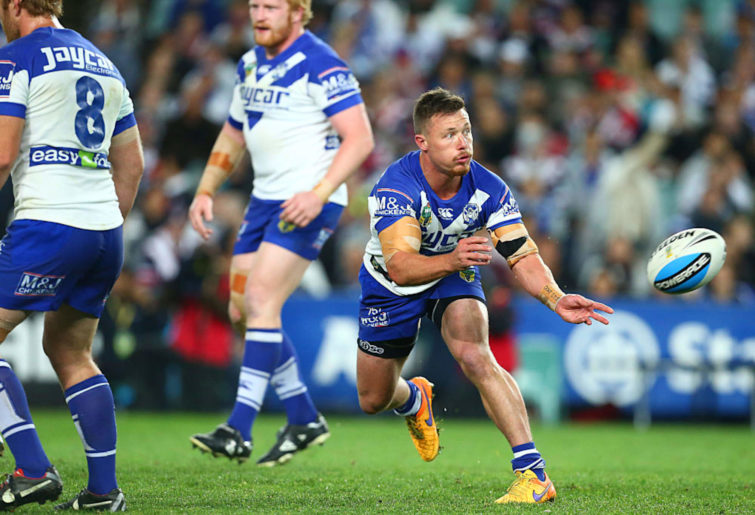 Damien Cook on the Bulldogs. (Photo by Steve Christo/Corbis via Getty Images)

10. Danny Williams
Hailing from Ipswich, Williams was a former Australian Schoolboy representative and a big unit. He began his first-grade career with the Roosters before spending the next three seasons with Canterbury, where he was selected to play in nine first-grade games.

11. Glenn Hall
Hall was a quality forward who played 220 games at the top level in a long career in both the NRL and ESL. A Canterbury junior, he made his first-grade debut for the club in 2002, going on to play eight top-grade games with the Bulldogs over the next two seasons before heading to South Sydney.

12. Alan Geelan
Geelan was a versatile player equally at home in either the back row or the backline. He was a Canterbury junior who came through their ranks and made his first-grade debut in 1980 at the age of 21. He played eight top-level games across the 1980 and 1981 seasons before moving on to Easts the following year.

13. Grant Millington
Another big forward, Millington got his start with the Sharks in 2008 before arriving at Canterbury for just the one season in 2011, where he played seven first-grade games. He left to play with Castleford the following year and has carved out a very successful career there, playing over 200 games with the club since 2012.

14. Daniel Irvine
A Parramatta junior and nephew of the great Ken Irvine, Daniel Irvine was a clever hooker who began his career with the Eels in the 2000 season. He had two years with the Dogs in 2005 and 2006, playing just seven top-level games before heading to Souths in 2007.

15. James Pickering
After a stint in England, the big prop forward came to the Bulldogs for the 1995, 1996 and 1997 seasons. Injuries restricted his top-level appearances to just nine games in three seasons and he then had stints at both Easts and Castleford in the ESL before returning to the Bulldogs for his final game at the top level in 2000.

16. Jon Green
Green was built for the front row and came to the Dogs in 2006 after playing his junior football in WA. He played just six games in the next two years with Canterbury before moving to St George.

17. David Boyd
A very good forward, Boyd got his start with Canterbury in 1986, playing eight top-level games over the next two years. Boyd has the distinction of playing in both the first competition games for both the Newcastle Knights in 1988 and the Western Reds in 1995.

Some other contenders for the lost Dogs list are Mick Adams, Barry Berrigan, Mick Trypas and Tom Gillogly.