In this case, you may have even forgotten about the club.

The Western Reds joined the ARL competition in 1995, switched to Super League in 1997 and then they were gone the next year. They weren’t the worst club however and won more games than Souths, Parramatta and the Cowboys combined in their first year, but then they faded badly in both 1996 and 1997.

It’s highly likely that very few league fans remember much about them these days, but there were quite a few talented players who briefly called Perth home towards the end of the ’90s.

Here’s a team made up of some players you may have forgotten ever played for the Reds.

1. Luke Goodwin
Goodwin hails from a famous rugby league family and could cover most positions in the backline. He could never cement a spot in the top grade, however, and managed only 45 first-grade games in his nine-year career. Three of those games came with the Reds in 1996.

2. Daio Powell
Like Goodwin, Powell was a journeyman who never realised his dream of league at the top level. Born in Wales, he played for a number of years in the UK and represented Wales on four occasions. His sole game for the Reds came in 1995.

3. Jamie Olejnik
Olejnik was a handy centre who came to the Reds in 1995 for seven games after getting his start with Penrith and then Manly.

4. Barrie-Jon Mather
Mather was a giant for a centre and was a dual-international, having represented England in union and both England and Great Britain in league. He played 24 games for the Perth side across the 1995 to 1997 seasons.

5. Darren Higgins
Higgins was a very good outside back who began his top-grade career with the Dragons in 1998. After a four-year stint with the Sharks, he headed west and played 24 first-grade games for the Reds in the 1996 and 1997 seasons.

6. Dale Fritz
Fritz was a very good 5/8 or lock forward who was one of the mainstays of the Reds in their brief existence. He played in their inaugural game against the Dragons in 1995 and went on to play 58 games for the club. He played nearly 280 first-grade games in a 15-year career, both in Australia and the UK.

7. Matthew Rodwell
Rodwell was a sharp halfback and a real journeyman, playing 188 first-grade games in a 13-year career. He played 57 games for the Reds over the life of the club and has the distinction of being named Cleo magazine’s bachelor of the year in 1993.

8. James Goulding
Goulding was a rugged forward who first came to notice playing for the Knights when they entered the top-tier competition. He joined the Reds in 1995 but only played one game. He was selected for New Zealand on five occasions.

9. Damien Chapman
The son of St George winger John Chapman, Damien came to the Reds in 1996 after a three-year stint with the Dragons. Better known as a halfback, he played 19 games for the Reds over the next two years before trying his luck in England. He jointly holds the record with Julian O’Neill for most goals kicked in a game with six goals.

10. Rodney Howe
Howe was an absolute machine on the field and played 166 first-grade games in his 13-year career. He would have played more but for a 22-game suspension in 1998 for using a banned substance. He played 40 games for the Reds across the 1995 to 1997 seasons before heading to the Storm for greater success. He played five games for Australia and nine for NSW, including Super League.

11. Mark Geyer
After a stellar early career at the Panthers, the tearaway Penrith junior had a brief stint with Balmain before playing 32 games with the Reds over the 1995 to 1997 seasons. Geyer then returned to Penrith when the Reds folded at the end of 1997. Geyer also played three games for NSW and three Tests for Australia. 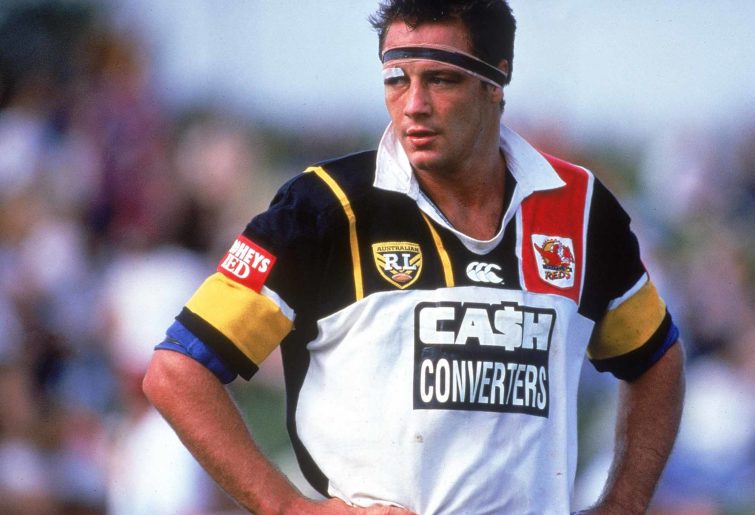 Mark Geyer of the Western Reds. (Photo by Getty Images)

12. Cameron Blair
Blair played 188 first grade games in a ten-year career that first took off at Wests in 1998. He had just the one season with the Reds in 1996, playing 14 games before heading off the equally ill-fated Adelaide Rams the following season.

13. Brad Mackay
Mackay was an absolute champion and played nearly 250 first-grade games in a 14-year career at the top level, as well as 17 Origins for NSW and 12 Tests for Australia. He was equally at home in the forwards or the backs and never left anything on the paddock. Understandably unable to stomach Dragons’ coach Brian Smith, Mackay headed west to become the Reds foundation captain in 1995 and played 21 games for the club that year before moving the Illawarra Steelers in 1996.

14. Brendon Tuuta
Tuuta had the reputation of being a bit of a loose cannon on the field and he certainly played pushed the envelope. Equally at home either in the halves or the forwards, he played 280 games at the top level predominantly in the UK and also played 16 Tests for NZ. He played nine games for the Reds in 1995.

15. Wayne Evans
Evans was a former Australian Schoolboy representative who failed to reach his potential in the big time. He played just over 70 games in a seven-year career, including 14 for the Reds across the 1995 to 1997 seasons. His career highlight was winning a premiership with the Storm in 1999.

16. Tahi Reihana
Reihana was a powerful forward who played just six games for Perth in the 1995 and 1996 seasons before heading to the UK in 1997 to further his career with the Bradford Bulls.

17. Brett Goldspink
Goldspink was a big front-rower who played around 200 games both in Australia and the UK across an 11-year career. He played 26 games for the Reds in the 1995 and 1996 seasons.