The COVID-19 pandemic meant that the Olympic Games had to be postponed with considerable uncertainty still about whether the Games will proceed.

Despite the interruption to their schedules, training regimes and ability to travel, our Olympic athletes still made time in 2020 to support others through the Australian Institute of Sport Community Events program.

This program saw close to 200 athletes from 19 national sporting organisations help various community causes and organisations including Clean Up Australia, Volunteering Australia, the Cancer Council and suicide prevention through R U OK? Day.

For AIS People Development and Wellbeing Director Matti Clements, the significant participation of so many athletes is something to be celebrated, particularly given that the program is only in its infancy.

“The team has done a brilliant job of setting up a national strategy,” said Clements.

“Three years ago, I was approached to set up athlete wellbeing and engagement for the country and one of the really important elements was community engagement; elite athletes inspiring the Australian public, not just through their performances but through the various ways they can contribute to the community via the skills they learn as elite athletes.”

When Clements was approached to establish a framework in this space, she came to a clean slate, which gave her a tremendous opportunity to start something new.

For Clements, the focus was to move quickly and effectively. The plan was to get some quick wins on the board to show athletes just how impactful their participation could be in the community.

The first organisation that athletes started working with was Lifeline through the Lifeline Community Custodian Program. But now, the program spans across many organisations and athletes have helped support communities to celebrate days of significance including Remembrance Day and Anzac Day.

But while Clements has watched how important this athlete engagement is for communities, she has also seen first hand the positive impacts that this engagement has on the athletes themselves. Importantly, there has been significant buy-in from a variety of sports and athletes across the country.

“Our athletes have amazing stories to tell. I have watched our athletes grow into telling their personal stories,” said Clements.

“They have grown into the fact that they have a lot to share outside their athletic performance.”

Given how important sport is to our Australian community, our athletes are often seen as role models. While many athletes pursue a career in sport because they love to compete or love their chosen sport, this role model status is an add-on.

For Clements, the skills that athletes learn through the programs offered in the athlete wellbeing and engagement space empower athletes to understand that they have a lot more to offer than just their physical feats and performances.

“By default, as an elite athlete you are expected to be a role model,” said Clements.

“That doesn’t necessarily mean that the athletes have the skills ready to be role models and in some cases they may not want to be put up in lights as a role model.

“But they are elite athletes because they are great at performing and are so athletically gifted, but some of them don’t know they are signing up to the other part.

“You can’t just plop an athlete into a community program and expect them to succeed. So the skills they develop before entering these programs is absolutely fundamental.” 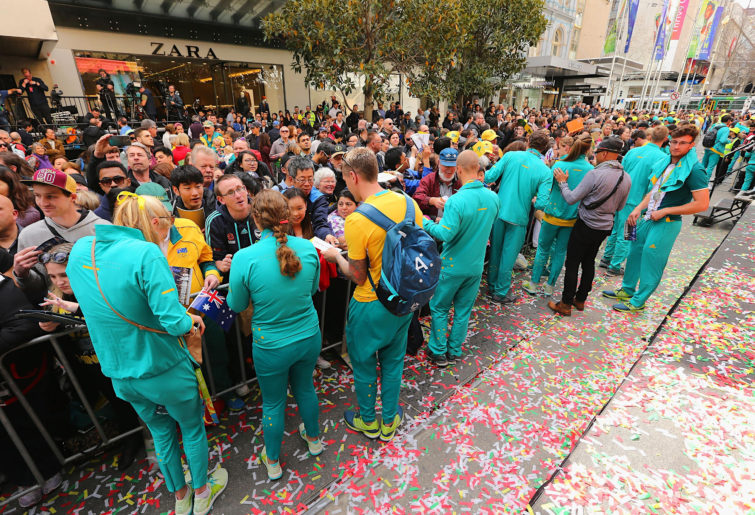 Australian Olympians spend time with their fans after the 2016 Games. (Photo by Michael Dodge/Getty Images)

Developing those skills not only ensures that the community enjoys the time with the athlete, but additionally that the athlete finds it beneficial. This means the athlete is more likely to develop confidence and feel empowered to continue to participate in the community space.

“We want them to put their best selves forward,” said Clements.

“We do communication training with them and that is about how you share your personal story and how to deal with the fact that your story is then out there.

“For the mental fitness program, they do all the training around mental literacy to help them deliver their positive psychology messages.

“I don’t want them to fall over at the first hurdle, so this is so important.”

For Clements, one of the most important parts of the program is watching athletes develop an understanding of all the transferable skills that they have. Athletes know they have talent in their chosen sport but are sometimes unaware of how these skills translate into other parts of life.

“A lot of the athletes lack the ability to articulate the skills they have from their daily training environment in a job interview,” said Clements.

“They don’t recognise them as transferable skills. Our job is to teach them how to articulate these skills.

“Perhaps it is because they spend so much time with other talented people that they can downplay just how exceptional their own skills are.”

For Clements, the Christmas period will give her the opportunity to have a well earned break and reflect on the success of this year.

With an Olympic Games to prepare for in 2021, no doubt this space will continue to be vitally important not just for our communities, but for the athletes themselves.