Brisbane Broncos – Jordan Riki
We all know season 2020 was a disappointing year for the Broncos. The one highlight I could find in their season was the blooding of Jordan Riki.

One of many highly rated forwards in the Broncos’ squad, a Round 1 injury suffered meant Riki had to wait until Round 14 before he debuted from the bench. He played three more games from the bench, showing the ability to handle playing both on an edge and in the middle.

Finally in Round 20 Riki was given a starting position in the Broncos’ back row and put in a strong 80-minute performance.

In his limited opportunities to date, Riki has shown talent on both sides of the ball with tackle-breaking ability and a high tackle efficiency. He has been endorsed by both then-coach Peter Gentle and captain Alex Glenn as a player able to fill the void left by the departing David Fifita.

Back row is one position where the Broncos’ depth could be questioned. I’d be surprised if Riki isn’t starting in the back row in Round 1, but if not, it won’t be long until he earns his place in the run-on team. 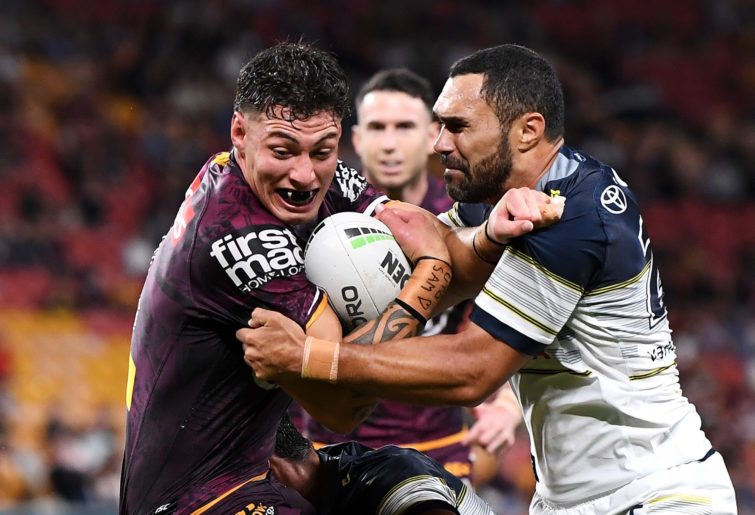 The emergence of Jordan Riki was a rare highlight for the Broncos. (Photo by Bradley Kanaris/Getty Images)

Canberra Raiders – Matt Timoko
With a mostly settled line-up, it was difficult to choose a break-out contender from the Canberra Raiders. A back-line spot exists after the departure of Nick Cotric. This is tipped to be taken by Bailey Simonsson, whose 2020 season was limited to just seven games after a shoulder injury in Round 9.

So Matt Timoko will again have to bide his time for a chance in 2021. Timoko is a 100-kilogram centre who best uses his frame with ball in hand.

In his two games in 2020 (which includes one 35-minute game from the bench) he ran for 200 metres and broke four tackles. If the opportunity presents itself early in the season for Matt Timoko, given the strong team he will be playing in, he is every chance of taking out the rookie of the year in 2021.

Canterbury Bulldogs – Jack Hetherington
Hetherington has played 23 games across three years to date. This includes playing six of his eight games last year as a loan player from the Panthers for the Warriors. This six-week period saw Hetherington make the run-on side four times – the only times he has started a game so far in his short career.

He joins Canterbury in 2021. With the departure of Aiden Tolman, a starting position is likely for Hetherington. The big front rower has already shown he has the ability, toughness and motor to handle first grade.

However he will need to control his aggression to not only stay on the field in 2021 but to secure his starting position.

Cronulla Sharks – Teig Wilton
Although he is a chance of starting Round 1 from the bench, Teig Wilton may need to bide his time before playing a significant role in 2021.

Coming through the Sharks’ systems, success followed Wilton, having captained the victorious NSW under-20s in 2018 and playing a vital role in Newtown’s 2019 premiership.

Wilton debuted off the bench in 2020 for the Sharks and didn’t look out of place in first grade. He went on to play four more games, and he was given a run-on role in Round 20.

He is an absolute workhorse back rower that runs a good line. Wilton has the type of game that fans of fantasy games will take note of should he get minutes in 2021.