The Test team I have picked for the year 2020 features five players from England, three from New Zealand, and one each from India, Pakistan and South Africa.

This team has only one player in common with the team I had picked for 2019 – England’s Ben Stokes.

Dom Sibley (England)
The start of the year saw Sibley notch his first Test hundred in his fourth match, in Cape Town, where his unbeaten 133 in the second innings contributed towards England’s momentum-shifting 189-run win. He also compiled a resolute 120 in the second Test against the West Indies at Old Trafford, putting on a crucial stand of 260 with Stokes. His patience at the crease brought him the reward of 615 runs at 47.30.

Dean Elgar (South Africa)
The left-handed Elgar was South Africa’s leading run getter, with a tally of 317 runs at a healthy 45.28. His two half-centuries came in the first and last weeks of the year respectively. In Cape Town against England, his 88 was the top score in a total of 223, while at Centurion against Sri Lanka, his rapid 95 and an opening stand of 141 with Aiden Markram gave a flying start to South Africa’s match-winning first innings.

Zak Crawley (England)
Crawley had the distinction of recording the year’s highest individual score – batting at number three, he hit 267 in 393 balls and nine hours against Pakistan in Southampton. During this maiden Test century, he added 359 for the fifth wicket with Jos Buttler, which rescued England from 4-127. Besides, he struck three fifties (one of them as opener) and ended the year with an impressive total of 580 runs at 52.72.

Kane Williamson (New Zealand, captain)
Despite playing only six innings, Williamson finished as the fourth highest run getter of the year. The Black Caps captain scored 498 runs at an average of 83.00, including a career-best of 251 against the West Indies in Hamilton. Three weeks later, he scored 129 against Pakistan in the Boxing Day Test at Mount Maunganui. Earlier in the year, he scored a fine 89 in testing conditions against India in Wellington. 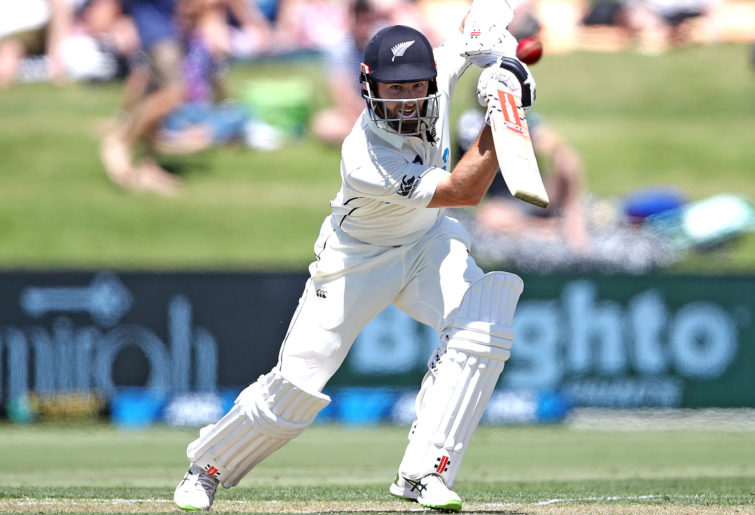 Ben Stokes (England)
Stokes further established himself as England’s most potent weapon. Not only did he lead the batting charts with 641 runs at 58.27 (with a strike rate of 62.17 to boot), but he also chipped in with 19 wickets at 18.73 and captained against the West Indies in Southampton. He was the player of the series in South Africa, with a best of 120 in Port Elizabeth. He bettered this with 176 against the West Indies at Old Trafford.

Mohammad Rizwan (Pakistan, wicketkeeper)
Rizwan made a successful Test comeback towards the end of 2019 and continued in the same vein with 302 runs at 43.14. In the rain-affected second Test against England in Southampton, his gritty 72 made him the player of the match. He captained Pakistan in the Boxing Day Test against New Zealand, shining in defeat with knocks of 71 and 60. His collections behind the wicket read 12 catches and one stumping.

Chris Woakes (England)
Woakes had a productive return with the ball, scalping 20 wickets at 21.65 with a best of 5-50 against the West Indies at Old Trafford. But his most significant display came with the bat against Pakistan, also at Old Trafford. He came in when England were struggling at 5-117 in a chase of 277 and went on to score an attacking, unbeaten 84 to secure a three-wicket win for his team. His run tally for the year was 176 at 29.33.

Ravichandran Ashwin (India)
Ashwin might have played only three Tests, but he was the year’s most impactful spin bowler. The off spinner netted 13 victims at 21.23, of which ten have come at an average of 17.70 – rather unheard of for a visiting spinner in Australia – in the ongoing Border-Gavaskar Trophy. His best figures of 4-55 were in the first innings in Adelaide, and he has so far got the measure of the prolific Steven Smith in the series.

Kyle Jamieson (New Zealand)
Standing at six foot eight, Jamieson took 4-39 in his debut innings against India in Wellington. He also biffed 44 in his first outing with the bat. In the next Test in Christchurch, he was the player of the match for his 5-45 and 49 in the first innings. Against the West Indies, he scored 51* in Hamilton, grabbed 5-34 at Wellington, and was named the player of the series. In all, he snared 25 wickets at 14.44 and scored 196 runs at 49.00.

Stuart Broad (England)
Dropped for the first Test against the Windies, Broad came back in style in the next two Tests, taking 16 wickets to end up as the player of the series. In the decider at Old Trafford, he had figures of 10-67 (6-31 and 4-36) and also passed 500 Test wickets. This, along with nine wickets in South Africa and 13 against Pakistan, made him the year’s highest wicket taker with 38 wickets at 14.76. He also logged 177 runs at 35.40.

Tim Southee (New Zealand)
Southee finished with 30 wickets – the second best tally – from just five matches, at an average of 17.03. He had match-winning figures of 9-110 (4-49 and 5-61) against India in Wellington and went on to be named as the player of the series for his 14 wickets. His best innings return of 5-32 came against the West Indies, again in Wellington. He reached the mark of 300 Test wickets with his last wicket of the year.