Three weeks ago, after running through India for just 36 in Adelaide, Australia’s Test attack were being compared with the best of all time.

The second innings blitz prompted suggestions that the pace trio of Pat Cummins, Josh Hazlewood and Mitch Starc, combined with the spin of Nathan Lyon, could conclude their collective careers as Australia’s best ever group.

Few could argue with the sentiment, nor the numbers.

Three weeks on, that same vaunted attack managed just three wickets on a day five SCG pitch against an inspired Indian batting outfit, whose 131-over rearguard effort was one of the best fourth innings batting performances of the modern era.

The result has propelled this iteration of the Border-Gavaskar trophy into an instant classic, and sets up a rare ‘live’ end to the Australian Test summer at the Gabba where all three results are still in play.

It will be a fitting end to what’s been a spellbinding Test summer.

All evidence pointed to an Australian victory on day five, and when touring skipper Ajinkya Rahane was dismissed in just the second over of the day, it appeared for all money the home side would storm to a 2-1 lead.

But a battered and bruised Indian side have shown they are made of sterner stuff than most touring sides in Australia.

Led initially by the resolute Cheteshwar Pujara and enigmatic Rishabh Pant, then the under-siege (and hamstrung) Hanuma Vihari and Ravichandran Ashwin, India not only saved the third Test, but did so with five wickets in hand.

Facing an injury crisis that would prompt most touring sides to roll over white flag in hand, India has instead fought admirably with their remaining players — some of whom will miss Friday’s fourth and final Test.

Monday’s effort was inspired, and it’s perhaps not difficult to see where they drew their inspiration from.

The tourist themselves said instances of harassment and abuse from the SCG crowd during the week gave added motivation to pull off a marathon batting effort.

“When adversities grow, the team comes together,” Ashwin said after play on day four.

“We have an opportunity to show what mettle we are made of”.

And they did exactly that.

Australia had their chances, and will rue a huge missed opportunity in Sydney.

Paine dropped Vihari in the final stages after already dropping Pant twice off Lyon, while sub fielder Sean Abbott shelled a difficult chance at midwicket from a mistimed Ashwin pull.

India, too, rode their luck.

A series of final session opportunities looped off the gloves and outside edge of Vihari and Ashwin into safe space.

But these are now just ifs, buts and maybes that will soon be forgotten. 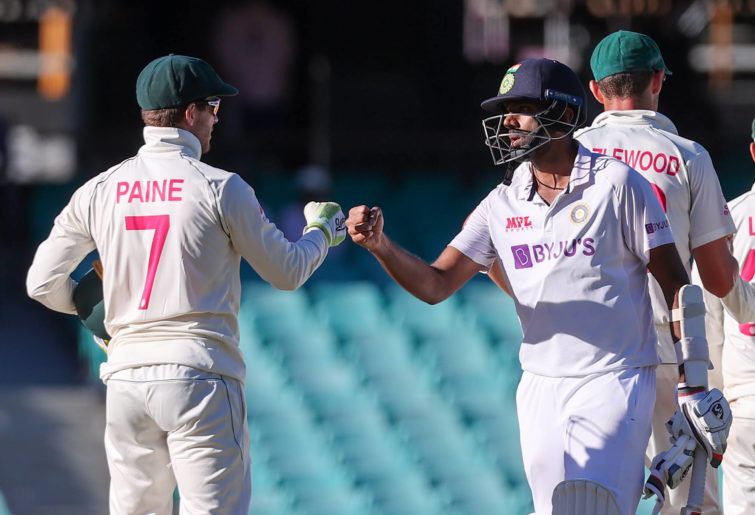 One aspect of the final day that surprised all was the lack of deterioration in the SCG wicket.

Variable bounce on show on day three meant some had forecast an SCG minefield by Monday.

But this didn’t eventuate.

Few balls truly stayed low, nor spat up at the Indian batsmen.

It was a terribly disappointing day for Australian captain Tim Paine, who had his worst day in an Australian shirt since day four at Headingley in the 2019 Ashes series.

Not only did Paine’s wicketkeeping errors cost his side key chances, his field placements and bowling changes were poor.

With runs on the board, Paine at times avoided attacking options and, when Pant was flourishing, was “ball chasing” according to Mike Hussey on commentary for Fox Cricket — that is, moving a fielder to exactly where the ball was just hit.

To make matters worse, Paine engaged in some needless and rather embarrassing back-and-forth with Ravichandran Ashwin late in the day.

Combined with a similarly needless and equally embarrassing swipe at umpire Paul Wilson on day three about a DRS call that had been correct, it concluded a poor week for the Australian captain.

While Paine has been a positive force in Australian cricket in many ways, his position as a statesman — a key aspect of his role in the post-sandpaper era — takes a hit when he engages in the manner he did in Sydney.

While the post-mortem will see blame predominantly thrown his way, Paine’s bowlers unquestionably let him down on Monday.

With a Test match on the line his key men, especially Starc and Lyon, largely missed their radar when it was most needed.

Starc’s probing final spell was, for both him and his side, too little too late.

Paine said post-match his bowlers were “superb all day”, but three day five wickets on the scoreboard would suggest otherwise.

His quicks now face a short turnaround after 131 overs in the field.

If Rahane calls correctly and opts to bat first at the Gabba on Friday, fatigue could become a significant factor in what has already been a taxing series.