Cameron Green is only six innings into his Test career yet the 21-year-old all-rounder is already showing up some of his veteran teammates by putting a higher price on his wicket.

A propensity for loose stroke play seemed to prompt the recent axing of Travis Head, whose middle-order spot was taken by Matt Wade, another batsman with a habit of gifting his wicket via adventurous shots.

Three times in this series Wade has been out skying catches while attempting needlessly aggressive strokes. On Day 1 of this deciding Test, Wade was cruising on 45 when he aimed an optimistic pull shot at a length delivery from debutant left-arm paceman T Natarajan.

His dismissal brought to the crease Green, a player at the opposite end of the spectrum to Wade in several ways. The 33-year-old former wicketkeeper was brought back into the Test team during the last Ashes due to his combination of good form and vast experience.

Mature-age batsmen like Wade are picked with an expectation they can make an instant impact in Tests.

Green, by comparison, has been chosen as a project player. No reasonable selector would expect a cricketer that young and inexperienced to immediately flourish at the highest level.

The world’s best all-rounder, Ben Stokes, was carried by England for his first 20 Tests as he averaged just 27 with the bat and 40 with the ball.

That investment has paid off handsomely for England and Green, too, will need a similarly long rope.

Already, however, Green is batting with a blend of maturity, patience and composure the likes of Wade, Head and opener Marcus Harris too often lack.

Fortunate to return to the Australian team in this Test due to an injury to Will Pucovski, Harris was out in typically sloppy fashion on Day 1, chipping an innocuous delivery to midwicket. Harris has averaged just 13 with the bat from his last ten Test innings, and all too often fritters away his wicket.

Green, to date, has displayed two clear advantages over Harris, Head and Wade. Firstly, he is happy to bat for time. Secondly he plays very straight until he is well set. That trio of more experienced batsmen consistently get themselves into strife while unfurling horizontal bat shots.

Harris is shaky on the pull and hook shot, and lives and dies on the cut. Were a bowling attack to place five men behind square on the offside, and bowl short and wide again and again, Harris wouldn’t take long to stumble into this obvious trap.

Head, while a patently superior Test batsman to Harris, also needs to reduce his reliance on the cut.

That Head has such a blatant flaw in his technique, yet still has managed to score 1153 runs at 40 in Tests, is cause for optimism.

Many Australian fans seem to have written Head off based on this weakness, but I still see him as a long-term middle order prospect. Clearly, though, he must address that issue.

Green is also very strong square of the wicket. During his rampant run of Sheffield Shield form he punished bowlers when they dropped short. So far in his Test career, however, the rookie has largely shelved the cut and pull.

Even against spin he is making a clear effort to play in the V as much as possible. Only in Sydney, as Australia charged towards a declaration, did Green finally roll out his full array of strokes.

Those who have watched him closely in the Shield know he has the ability to cut loose.

But his preference is to play within himself for his first hour or so at the crease before expanding his repertoire. This is old-school Test batting, the likes of which was common in the pre-T20 era. 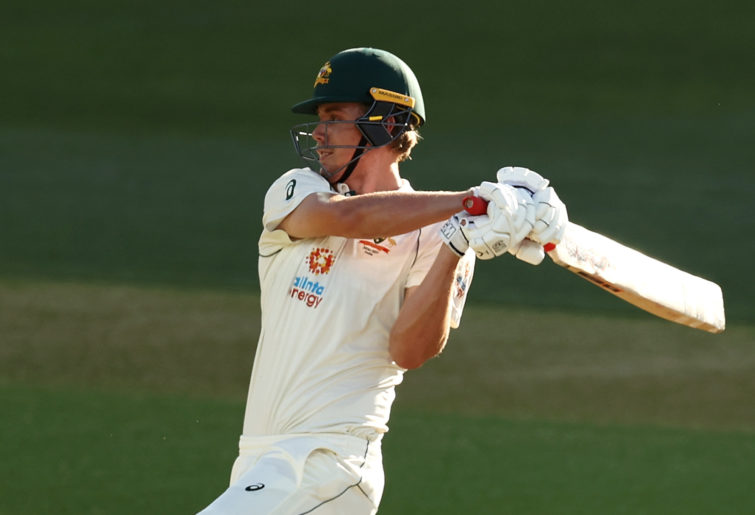 Cameron Green has made a strong start to his Test career. (Photo by Ryan Pierse/Getty Images)

So far in this series, the only batsmen who have soaked up more balls per dismissal than Green (81 deliveries) are Marnus Labuschagne (118), Cheteshwar Pujara (112), Ajinkya Rahane (93) and Steve Smith (89).

That’s not to suggest he is without technical shortcomings. Green has, at times, become too defensive, allowing the bowlers to dictate terms.

He also has a tendency to plonk his large front pad down the line of the ball. This can force him to reach around that leg, which in turn can make him overbalance to the offside, not dissimilar to Australia’s last proper all-rounder, Shane Watson.

Crucially, Green already has showed signs he’s working on both of those flaws. It was noticeable that he tried to keep his front pad clear more often during his impressive knock of 84 in Sydney and in his follow-up innings of 47 yesterday.

In both those innings he also was more pro-active in rotating the strike. The two most impressive things about Green’s batting are very subtle and pretty boring. The first is his assured forward defence.

Green has played more solid front foot defensive strokes in his six Test innings than Harris has in his 18 career knocks. The ability to dead bat a threatening delivery is the foundation of an elite Test batsman’s game.

Green’s second key attribute is his willingness to bat time. So many Test batsmen are unwilling to weather tough periods.

Instead of identifying that the opposition attack is on song, and needs to be quelled, they try to hit their way out of trouble.

Green is clearly very comfortably bunkering down. He bats without ego. Good balls are treated as such, and terrific spells are respected.

Green recognises that, once he survives those tricky passages of play, the tide will turn in his favour.

This is a mature, uncomplicated style of batting that is made for Test cricket. Some of Green’s batting colleagues should start replicating his approach.