What are the two key NBA games this week?

With the biggest day in American sports (the Super Bowl) out of the way, we focus our attention back on the NBA. Here is my guide and predictions for two of the most exciting and key NBA match-ups this week.

Celtics at Jazz: Wed 2pm (EDT)
On Wednesday we will see an inter-conference match-up which will feature the Utah Jazz.

The Jazz are are on a roll that has not stopped all season and the Boston Celtics who are some what struggling after losing four of their last six games.

The Celtics, despite their fourth-seed placement in the East, been lagging in parts of their games.

However, lately they have been able to pull off some great wins.

They defeated the Clippers on Saturday and beat the Warriors on the road on Wednesday. These teams that they were able to beat are real threats in the competition.

Last time out for the Celtics was in Phoenix when they had a poor third-quarter which lead them to a nine-point loss against the Suns.

In their poor third quarter they were outscored by 14 points. Despite the efforts of Jason Tatum and others in the fourth quarter it was enough for the Suns to win the game. 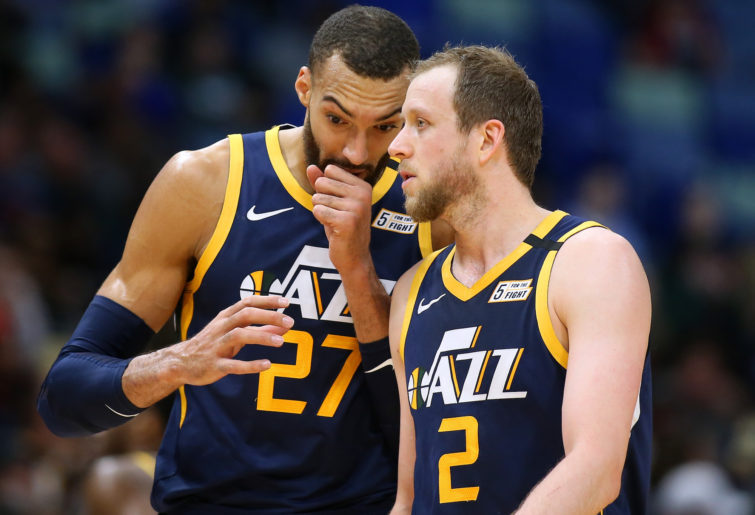 The Utah Jazz on the other hand have looked one of the strongest teams in the NBA to this point of the season as they are currently holding the one seed in the West.

All of Utah’s players have been firing lately, especially their six-man Jordan Clarkson. He has brought exceptional three-point shooting in matches.

Clarkson in my opinion has been the best six-man up to this stage of the season.

He is providing all of those listed features, to go along with an average of 17 points per game this season.

The Jazz as a whole have been outstanding three-point shooters.

They have a rate of 38 per cent of their shots made from deep (second in the NBA) The upcoming run for the Jazz will tell me and others a lot as they come up against top teams like the Lakers, Bucks back-to-back tussles with the Clippers and this one against the Celtics.

Overall, I expect this to be a tuff fought affair, however I believe that the Jazz will keep rolling and take the chocolates in this one.

Nets at Warriors: Sun 12:30 pm (EDT)
This Brooklyn Nets and Golden State Warriors is by far the most important game to look out for this week

It is a great way to end your weekend. This match is also an inter-conference one, however there are some big storylines for this tussle like Kevin Durant up against his former team, Steph Curry versus the big three and many more.

The Golden State Warriors will enter this much anticipated match-up after a good game against Luka Doncic and the Mavericks on Saturday.

Stephen Curry was able to put up his second-highest career points total with 57 points. This career highlighting performance was not able to get Golden State over the line, as Dallas’ all-star Doncic was also able to have an outstanding game as he put up his career high in points with 42, to go along with 11 assists.

Curry is an MVP candidate this season so far. Before the Warriors take on the Nets, they will have to finish off a four-game road trip when they play the Spurs back-to-back and then tussle with the Orlando Magic.

Sunday’s opponents of the Warriors are the Brooklyn Nets, who have looked great at times – however have rarely been able to put their big three on for show.

Kevin Durant has been dealing with COVID-19 protocols and Kyrie Irving seems like he is not playing because that is what nature is telling him or something weird like that.

Despite the drama, the Nets will hope James Harden, KD and Irving will all be able to play as this is an important game for them.

If Durant does play it will be the third time he will be facing his former team. He left the Warriors after their finals run in 2019.

Most people have drawn their attention to how good the big three are playing lately.

Other players have been rising, like the player with the most dunks this season to date – Deandre Jordan.

Then there’s the shooting capability of Joe Harris who is hitting threes at an extraordinary 50 per cent (fifth in the NBA).

Overall, I hope that the Nets big three play well. I am predicting this game to go down to the wire but the Nets if all of their stars and present and healthy to take out a tight win on the road in San Francisco.