A warm welcome at the gate from two gentlemen dressed in full black tie was a classy way to enter the palace in the western suburbs of Sydney. A complimentary colour programme was also handed out, containing the all-important team lists.

The curtain raiser involved the under-20 teams, locked at 0-0, and this one reached boiling point as we arrived. A hefty challenge from the home goalkeeper quite rightly led to a penalty after consultation with the assistant. After vehement argument from the Marconi players, the resulting spot kick was smashed against the post and away.

It wasn’t long before a second penalty was awarded at the other end. The referee took an age to make the call for what looked like a clear foul. This time the taker ballooned the shot over. No goals then, but the growing crowd were entertained. With only ten minutes before the main event, the youth players were hastily ushered off the field.

A minute’s silence for Rockdale player Idriss El-Hafiane, who passed away in January, was impeccably observed after the two teams emerged for the main game. Sydney FC were shooting towards the north end, where I was situated. A bank of 20 or so Cove boys had congregated and were belting out numbers from the Sky Blue songbook to create a terrific atmosphere.

The squads read out over the tannoy were barely indicative of the teams that started, in fact Brandon Vella was announced as both starting and on the bench, while Luke Ivanovic was up front for Sydney FC, with Simmo (I can only assume that’s Aidan Simmons) slotting into midfield.

Once the first half got into its stride following a lengthy injury to a visiting player in the first five minutes, it was dominated by Marconi. There were many crosses into the danger zone, but a lack of a cutting edge and some smart goalkeeping kept the home team out.

Ivanovic was getting some heavy treatment from his close markers, and when he did get time on the ball, the rub of the green went against him. Sydney FC played some intricate football to get themselves into a good position in the box, but couldn’t find a way through the last line of defence and the home goalkeeper was barely tested.

At the break then, on points, Marconi would have taken out the half in a unanimous decision.

I had a change of vantage point for the second half, keeping close to the media gantry on halfway where the excitable commentary from NPL TV could be heard. The game started to open up.

Marconi showed flashes of brilliance down the right. Smart footwork and dangerous crosses led to nothing. A smart cross from the left was drilled wide from close range. This had the home crowd from the main stand off their seats.

A spectacular overhead kick up the other end from Jaiden Kucharski would have rivalled Wayne Rooney’s effort against Manchester City, but the ball was blocked.

Despite Marconi being calm and controlled at the back, the game was becoming stretched, and Sydney finally capitalised. A break down the right saw Kucharksi race away, perhaps half a yard offside from my perfect viewing angle, and the bouncing ball was lifted over the keeper and in to the net for a classic counter-attack goal.

The wry look from the gentleman to my right who had the perfect line told us that VAR might have had a close look at that one. 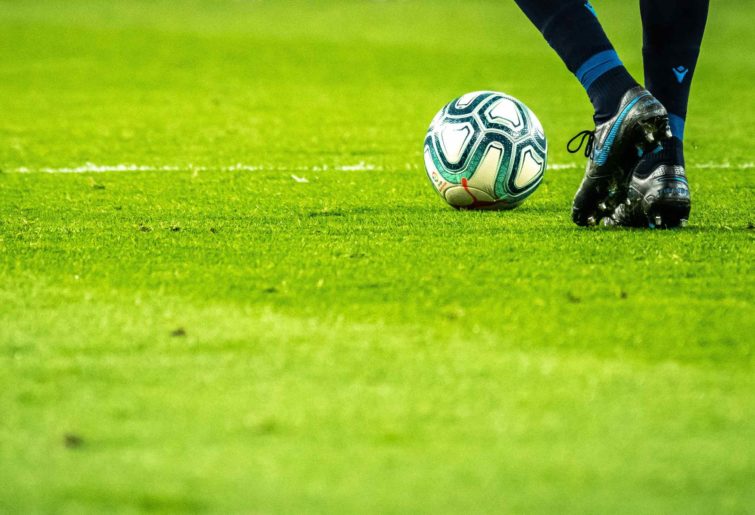 The Stallions went close with a number of half chances. One rasping effort cleared the frame of the goal and went out of the stadium to jeers and cheers, but they couldn’t fashion that clear-cut opening. Sydney FC had snatched the three points.

As is customary at A-League games, the Sydney players made their way over to the Cove and were serenaded with more tuneful chants to great applause. A home fan hollered ‘beaten by a bunch of kids’ into the media gantry, which summed up Marconi’s night.

This was not the classic game that we had anticipated from an opening night. It did highlight, though, the different styles of the two teams. Sydney FC were very much in the mould of their A-League counterparts with their slick passing and quick feet. Marconi looked solid and workmanlike, but had some impressive flair when they needed it.

Friday, though, wasn’t their night. The crowd streamed out of the single gate, and I was out of the car park in two minutes listening to the Daft Punk tribute on Triple J, rolling into the driveway at home just before 10:30pm.

It was great to have the NPL back. I loved seeing the Cove do their thing, and to have the Marconi Stadium experience.

There is much more top-level football to come. This is only the beginning.