He is a very likeable character, so there’s good reason to feel bad. But to understand his situation and what happened to him, we need to look back.

Kuldeep hit his peak in 2017-18 when he became an IPL regular and had an amazing overseas season for India. He was never a variation bowler – his strength was his stock legbreak and googly which, paired with the above-eyeline flight, was difficult to pick.

For spinners like this, when you start playing regularly, it’s only a matter of time before batsmen start to figure you out.

Specifically, when he became a worldwide menace, his action and biomechanics were analysed quickly and it was found that his round-arm action and release makes him put the ball in the slot, preventing him from late adjustments and him being slower through the air can be used against us.

This counter-strategy started to work fruitfully from 2019 IPL and that’s when Kuldeep realised that and told people around him that the ball was not coming out of his hand as he wanted to.

This was the time he worked to remodel his action and release. People kept questioning his snub but he had to get used to his new action before he could use it on the international stage.

He started with his new action in the IPL and it looked a disaster. 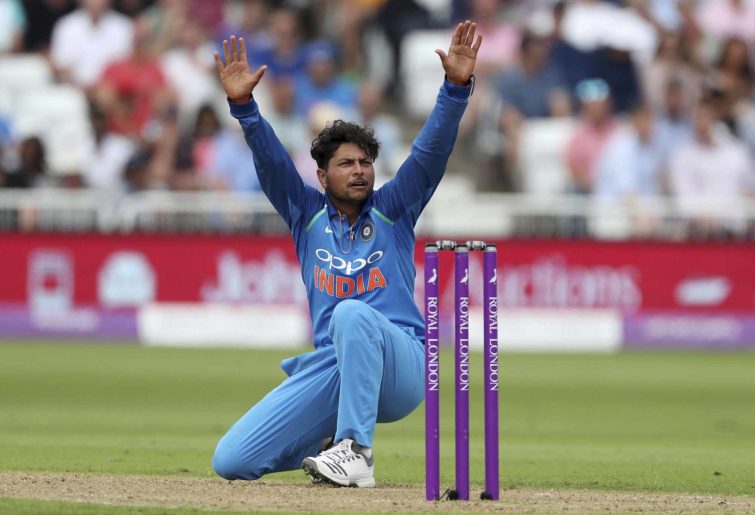 The trajectory was much flatter; he could adjust the change of pace now but that didn’t help. More staggeringly, he lost a lot of revolutions on the ball which used to give him the bite off the pitch, but still had his old weaknesses along with it.

His IPL side had to replace him with Varun Chakravarthy who offers much more control. People kept on pitching for Kuldeep’s selection, and the Indian think tank – despite being sure of his situation – gave him occasional opportunities in ODIs against Australia and England.

They were very much sceptical about him in Tests that’s why was not risked ahead of Shahbaz Nadeem or Axar Patel and was given a much less important role later just to satisfy the peer pressure.

Why couldn’t he evolve?

Spinners need to evolve regularly in modern day cricket to avoid perishing. Ajay Jadeja said the ready-made guidance from MS Dhoni prepared him mentally in such a way that he stopped thinking himself and that affected his adaptability in crisis.

Sometimes, as fans, by trying to back players we do more harm to them than help. Kuldeep has been a dear to us for so long but he really needs a break from top-level cricket for some time.

As much as I know him, mentally, he isn’t someone to fight in the muds of domestic cricket but on the other hand he needs to bowl more in competitive cricket to get over whatever problems he has been having. That can only be available in domestic cricket.

Until a couple of years ago, both Yuzvendra Chahal and Yadav were Virat Kohli’s strike bowlers in limited-overs formats for India. However, they are now fighting for survival and the upcoming IPL season will be crucial for them to regain confidence.

Yadav played only one international in Australia, an ODI, and then played one Test and two ODIs during England’s tour of India. His performance in the first two one-dayers against England was below par: 0/68 and 0/84 and he was dropped for the last match of the ODI series.

He hasn’t played a T20 since the IPL last season.

Kuldeep should have been back to domestic cricket long back. The only reason he wasn’t was because he wasn’t given any closure. That is why you need to give players opportunities to fail so that you can discard them and they get closure.

The Kolkata franchise, which already had spinners Sunil Narine and Varun Chakravarthy in their ranks along with Shakib Al Hasan and Pawan Negi, have also bought seasoned off-spinner Harbhajan Singh for this season.

Other than Kuldeep being one of his kind, there is nothing else that makes him a surefire starter in the XI.

It will be much better if fans understand his situation and let him be.

Playing the blame game will not help him, anyhow.