We saw the Australian Test captain, Tim Paine, keeping wicket for Tasmania – and rolling his arm over in club cricket. We’ve seen many of the Test stars re-join the domestic first-class circuit. That’s a good thing, I believe, for benchmarking the aspirants.

However, this has also more starkly exposed the fall from grace of Mitchell Starc. His Test summer started brightly with 4/53 in the first innings in the Adelaide day-night Test match. He barely got a sniff in the second innings rout with 0/7.

From there, Starc’s trajectory flattened, then nosedived. He finished the four-Test home series with 11 wickets for 448, going at a tick under 41 per wicket. The first two Tests produced most of those with eight for 158. The next two Tests saw Mitchell claim a paltry three wickets at the cost of 290 runs.

Yes – he was sore. He was not quite right. However, we’ve seen that before. He loses his rhythm too readily and he that means he loses his value to the team.

And so he returned to the New South Wales side.

He’s played four matches post the Test series. In these games, he bowled in seven innings, and taken wickets in only three of those. With match returns of 1/104 (versus Victoria), 2/146 (versus South Australia), 3/117 (versus Tasmania) and finally 0/82 (versus Queensland).

The outcome of these four matches is a feeble six wickets for 449: a smidge under 75 runs per wicket.

Right now, I would not retain him in the NSW side for the Shield final. He’s a liability – he’s not taking wickets and he’s also leaking runs.

The reality of this is the last six Tests/FC matches, the most current body of work: nine wickets at 82.11, 3.73 runs an over with a SR of one wicket per 132 balls bowled. That’s not sustainable.

That to me is a player who should – using ‘nice’ language – be ‘rested’. 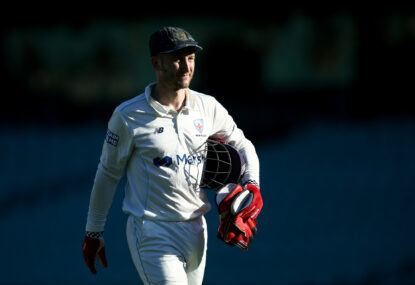