I cannot wait for the Friday match. As a Dogs fan the clashes against Greater Western Sydney are usually memorable and tricky to tip.

The teams really don’t like each other. If you don’t believe me and think it’s all beaten up by the media, go and listen to Bob Murphy talk about the early days between the two teams or Dylan Buckley on his podcast if you can find it. There’s a lot of feeling between them, all of it bad.

Some say it began before either team met each on the field, when GWS took Callan Ward in 2011. Before then he had been a star Bulldog and a player many in the club considered a future captain. It was not to be. But I reckon it started around 2014, when they ruined Daniel Giansiracusa’s farwell.

Here are some highlights from that game and other moments that have contributed to my favourite modern rivalry in football.

Gia’s farewell
Daniel Giansiracusa played his last game for the Dogs in Round 23, 2014. He had been used mainly as a sub for the majority of the season but had an agreement with then coach Brandan McCartney that he would start the game. The game started well for the Giants when they led by as much as 33 points in the second, but the Dogs responded and led by nine points early in the quarter.

The Giants then came back, kicking five of the next six, including one in the last 20 seconds to take the lead. Jake Stringer could have secured victory for the Dogs but dropped a mark that was collected by the Giants and rushed end to end for a goal.

It was an epic clash made even more memorable by the brawl that broke out at three-quarter-time between almost every player on the field.

The Boyd-Griffen trade
Captain Ryan Griffen announced in the off-season that he wished to be traded to the Giants after falling out with the coach. Brendan McCartney resigned the next day after it became apparent that he had lost the players. Tom Boyd then declared that he also wanted to be traded to the Western Bulldogs, and it came to light that the Bulldogs had been secretly talking to the rookie Giant about coming over to the Dogs once his contract was finished.

Both teams went back and forth over the fine points of the trade, but in the end Ryan Griffen went to GWS with Pick 6 and Boyd went to the Dogs. Both clubs had a go at their departing players publicly after the trade was finalised. 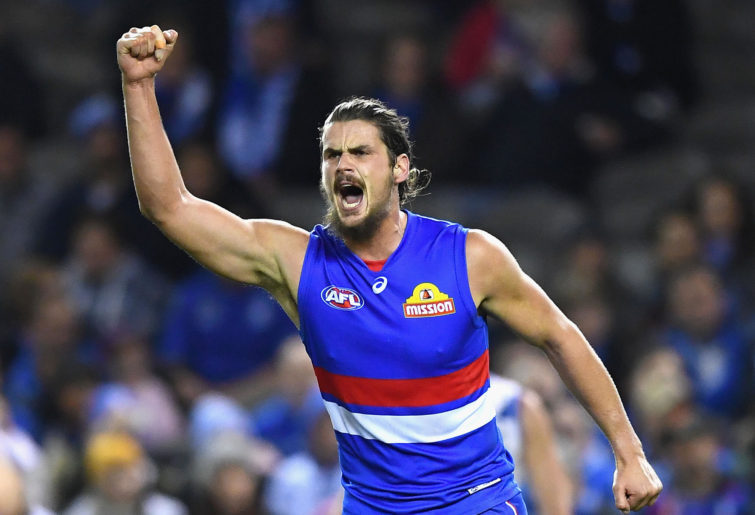 The 2016 preliminary final
I watched this game at about five in the morning in my apartment in Italy with my father. We were never not on the edge of our seats. This game had everything. It was tough and physical with moments of individual brilliance. The margin never got out beyond three goals, and it took until the last minute for the Bulldogs to seal it.

Many Dogs fans refer to the grand final a week later as their favourite Bulldogs moment, but after living through five preliminary heartbreaks, particularly the three in 2008, 2009 and 2010, this game is far and away my favourite. When the Bulldogs were 14 points down I didn’t think they could come back, and my father agreed. I knew the feeling. They had tried, but it wasn’t enough.

I was so wrong and so happy to be so. Jason Johannisen’s run from halfback to set up the Marcus Bontempelli goal. Brilliant. I will never get tired of watching it.

The 2017 home-and-away games
After a successful 2016 series that ended in a flag the Bulldogs collapsed a little in 2017 while the Giants recorded back-to-back top-four spots. They met twice in the home-and-away season. The first time was a thriller, with the Giants winning the contest by two points. Flag hero Tom Boyd had the chance to win the game in the last two minutes but sprayed a set-shot kick. The Dogs kicked 9.19 for the game, which sums up that year really – close but not good enough.

The second match between the two was a lot more convincing in the Giants’ favour, as they powered their way to a 48-point victory. The game will be remembered more for the kick to the face Toby Greene gave Luke Dahlhaus while going for the mark. The papers said it was accidental and he escaped with a fine, but I’m not convinced…

The 2019 home-and-away season and elimination final
The 2018 season was a rebuilding year for the Bulldogs, while the Giants made it to the second week of the finals before going down to Collingwood by ten points. Then 2019 was interesting not because the two games between the sides were close but also because of incidents during the games.

In Round 22 the Giants had injuries galore and the Dogs were on a bit of a tear, belting up teams all over the place. This game was no exception, with the Dogs winning by 61, but the in-game moment was Bontempelli fracturing the larynx of Nick Haynes and escaping with a fine after the hit was evaluated without a medical report from the Giants.

Two weeks later the teams would meet in an elimination final, and the almost full-strength Giants would run riot against the Bulldogs, harassing them and bullying them en route to a 58-point victory. What was most memorable about this game was the way the Giants went after Bontempelli all game – at one stage Greene was seen to be scratching his face while he was at the bottom of a pack – and the lack of response from fellow Bulldogs was a mistake they would not make again.

There you have it. Bring on the next chapter on Friday night. The bookies have the Dogs as favourites, and I have to agree considering the injuries the Giants have as well, but I don’t think it’ll be all easy going for the Doggies. GWS like to bully them and won’t give up without a fight.