Of course, we should have seen it coming.

When Peter V’landys first took over as ARLC Chairman and made that famous speech wherein he vowed to “destroy the game of rugby league for good” and laughed insanely for over eight minutes straight, we should have read between the lines and realised: this man meant no good.

Well, he’s made good on that promise, hasn’t he? With this weekend’s fascist crackdown on high tackles, rugby league as we know it is dead and buried and all of us who once loved it might as well go find an ice hockey team to follow.

For what kind of game will rugby league be, if tackling around the head and neck is suddenly forbidden? What kind of game, where proud men are sent from the field simply for doing what comes naturally and hitting other proud men in the head?

What kind of game, where players are so infantilised that they are not presumed to be mature and responsible enough to give informed consent to being concussed?

I’ll tell you this: it’s not the game I grew up with.

It’s not the game of Rex Mossop, or Kevin Ryan, or Noel Kelly or any of the mighty melon-whackers of days now sadly behind us.

Rugby league is a magnificent sport with a rich and vivid history, built almost entirely on hitting men in the head.

Everyone remembers the great Parramatta team of the 1980s, coached by the legendary Jack Gibson, and the enterprising and free-flowing way they used to smack their opponents in the face.

That Eels team vied for supremacy with the fearsome Canterbury Bulldogs, who built their success on a rock-solid, concussion-focused defence.

Think of the greatest moments in rugby league history: you can be sure over 90 per cent of them involve forceful contact to the head. Recall Game 1 of the 1994 State of Origin series, in which Queensland seemed dead and buried until, in a sweeping movement starting deep in their own half, the Maroons repeatedly punched the NSW team in the face, thus securing a last-second victory.

Or that incredible streak when Queensland concussed the entire NSW team eight years in a row.

A similar scenario was played out by Newcastle in the 1997 grand final, when Andrew Johns snuck down the blindside, broke Geoff Toovey’s jaw, and took the title.

In fact grand finals have always been the stage on which rugby league’s finest headhunters have plied their trade, from Brett Kenny of the aforementioned Eels, who concussed two opponents in each of three consecutive deciders, to Benji Marshall, who famously hit Johnathan Thurston in the head behind his own back in 2005.

And what would have happened in the 1988 grand final had Terry Lamb not shown his skill and game sense by thumping Ellery Hanley?

Hanley may well have played out the entire game, possibly even scoring some tries and displaying his supreme athleticism. Which is hardly what the crowd came to see. 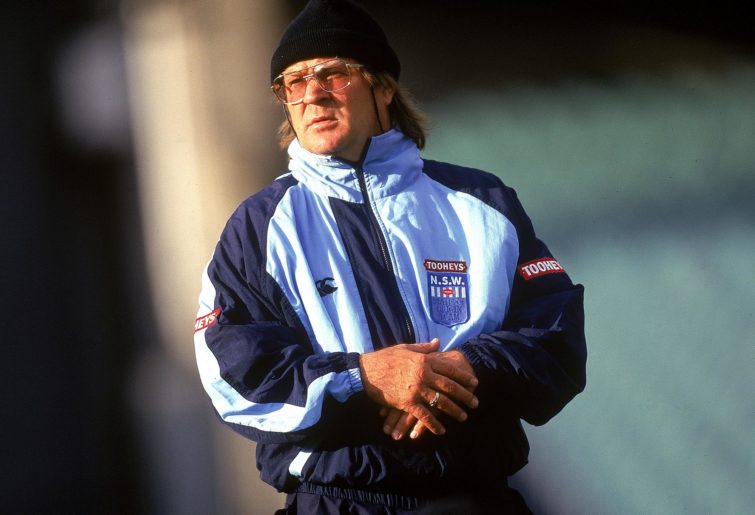 Rollin’ in his grave. (Photo by Sean Garnsworthy/Getty Images)

And that’s what this is all about, and what Mr so-called V’landys doesn’t seem to get: rugby league isn’t about the rulemakers or the executives or the neurologists.

It’s about the fans. And what rugby league fans want is what they’ve always gotten from league, more than any other sport: head injuries. Take the cranial trauma out of league and you end up with a game that is frankly indistinguishable from lawn bowls.

But that’s what they’ve done. They’ve killed the noble sport that began all those years ago when disgruntled rugby union players formed their own competition due to greedy administrators who wouldn’t let them hit each other in the head.

Ever since that day, though league has gone through myriad changes, one principle has remained at the heart of the game: the principle of healthy, competitive brain damage.

Not any more, though. It’s all over for head-high contact, and so it’s all over for rugby league. From now on the game will be played only by soft, effeminate poseurs who prance about the field in full possession of their mental faculties, remembering with total clarity the recent events of their lives.

And that sure as hell ain’t the game I fell in love with.