Townsville gets its first taste of rugby league’s greatest spectacle as the 2021 State of Origin series roars to life between the Queensland Maroons, who come into the series as defending champions, but underdogs, and the desperate New South Wales Blues.

While it goes without saying that desperation is apart of Origin football, the Blues will have a little bit of extra motivation in 2021 after losing last year’s series to a Queensland team (very unfairly) dubbed as the “worst in the history of Origin” by some sections of the media.

Of course, they had the master coach in Wayne Bennett, and while that doesn’t exist as an advantage for the Maroons this time around, life under ex-Cowboys mentor Paul Green has begun with some bumps in the road.

The withdrawal of Kalyn Ponga doesn’t help Queensland’s cause, and neither does the fact Melbourne Storm superstar duo Cameron Munster and Harry Grant haven’t played a game in some weeks due to their own injury concerns.

While they have been cleared to play, having such a vital part of the team virtually untested in coming back from injury but walking into what will be a ferocious, fast-paced environment in the Origin arena in front of a rowdy Townsville crowd is going to be an enormous risk for the men from the sunshine state.

The impact of Munster for the Maroons was astronomical in the 2020 series, despite the fact he was wiped out in the second minute of Game 2. It should come as a surprise to no one that it was the game Queensland lost, and you could almost say the Maroons need a fit and firing Munster to win this series.

The Storm half has been in outstanding form at club level too, and given the Blues’ attacking might, he and halves partner Daly Cherry-Evans will need to be at the absolute top of their games to keep the Maroons in the contest as they attempt to go punch for punch with the most in-form halves pairing imaginable.

Jarome Luai might be a debutant to the Origin arena, and Nathan Cleary might still have a lot to prove at this level and in big games more generally, but the form they have shown for the Panthers has been nothing short of extraordinary in 2021.

Before they sat out the Round 13 fixture due to being in Origin camp, the Panthers had won 12 on the bounce to start the season, and while it’s a team effort on one foot, their attack has been humming at a level almost unprecedented, with Cleary and Luai providing a lot of the pieces to the puzzle.

In 12 games, the duo have an unreal 26 try assists and eight tries between them, and when that is combined with excellent game management, a strong kicking game and the combination of both being able to run the footy, it will cause constant headaches for the Maroons in defence.

Not only that, but Cleary is now experienced at this level, and while he has questions to answer, he will be looking to take something of a leading role in steering the Blues around the park.

The spine for the Blues is unbelievably strong, with James Tedesco also in outstanding form at the Roosters. The game’s best player over the past couple of years has also been a superstar at this level, and if he combines well with Cleary and Luai, it could be curtains for the Maroons.

Damien Cook, who rounds out the Blues spine, has also been in much better form throughout 2020 and leads the NRL for dummy half runs. Ordinarily, this stat would be almost meaningless, but when the game is being played at such a high pace, and six against run rampant, he will prove a weapon.

Despite all that, the obvious advantage New South Wales hold in attack will count for very little unless their forwards can match up to that of Queensland, who seem to hold the upper hand in the battle of the middle third.

While there isn’t a great deal in it statistically, the combinations the Maroons will be able to build through the middle third on the back of Christian Welch, Tino Fa’asuamaleaui, Jai Arrow, Moeaki Foutaika and Joe Ofahengaue, who will provide plenty with his ability to break the line and offload the footy, will leave the Blues facing an uphill battle.

At best, New South Wales could hope to nullify the Maroons and keep the battle even in the middle, which should create a cracking game, but with Cameron Murray out of position in the second row, Tariq Sims not in the greatest of form and the slightly baffling decision for Jake Trbojevic to start in the number ten jumper over Payne Haas, it’ll be intriguing to see how New South Wales handle the early onslaught against a Maroons pack who will be fired up with the crowd on their side.

The key lies in those first 20 minutes for the Blues though, because if they can see off the first part of the game, Payne Haas and Junior Paulo should give them an enormous advantage. 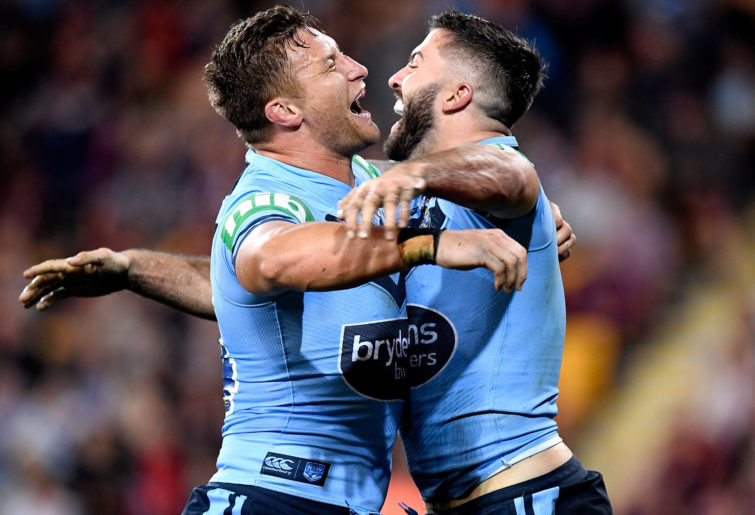 Queensland do have one major disadvantage though, lying in their outside backs, with Xavier Coates and Valentine Holmes among the three players who make more errors than any other in the competition, while the make-up of the team is also still up in the air, with Alexander Brimson having a somewhat unclear role to play.

Prediction
Given the speed of the game, it could get away from the losing team a little bit in the last 20 minutes. I anticipate the Blues pack will be able to match it with the Maroons, and their discipline and defensive work will get them the edge through the first hour.

The influence of a fit Damien Cook, combined with the strike in the outside backs, then should enable New South Wales to kick away with the win.