The injured and suspended Origin XVIII

With the number of injuries and suspensions that plague the modern era of rugby league ever increasing, I thought that it would be interesting to see the best possible team of Origin-eligible players who currently fit the suspended or injured criteria.

Fullback – Ryan Papenhuyzen
The young Melbourne fullback was all but guaranteed to make his debut last year before an injury ruled him out for the series. Unfortunately, a concussion sustained in Round 10 means he will miss Game 1 this year.

Despite only playing six games so far in 2021, Papenhuyzen has been able to score eight tries, often being the best on ground for a brilliant Storm line-up.

Winger – Corey Thompson
The Titans winger was playing career-best football before an ankle injury sustained in Round 8 left him on the sidelines. With the injury of Kalyn Ponga likely handing Kyle Feldt an Origin debut, there is every chance that if Thompson stayed healthy it could have been him playing in Game 1.

Centre – Kotoni Staggs
Remarkably not only has Staggs been able to make this side off an ACL rupture, but also from his recently acquired two-week suspension.

In an otherwise disappointing 2020 for the Brisbane Broncos, Staggs was undoubtably the shining light, winning NRL Centre of the Year. He likely would have been competing for at least a Blues squad spot in 2021.

Centre – Zac Lomax
The Dragons centre made Freddy’s squad last year, with many counting him unlucky to not have debuted at some stage throughout the series.

Unfortunately, a thumb injury has halted his bright start to 2021, meaning that he was not in contention this year. Similar to Staggs, he likely would have been in or around this year’s squad.

Winger – Edrick Lee
The towering Knight got his first taste of Origin football last year, playing one match in the series win. Unfortunately, a nagging foot injury has ruled in out indefinitely, meaning that he is unlikely to get another chance this season to don the maroon.

Five-Eighth – Kalyn Ponga
The electrifying fullback has had to deal with a plethora of injuries over the last nine months, including a shoulder injury that ruled him out of origin last year, and a groin injury currently.

Undoubtedly his current best position is fullback, however due to his creative capabilities and Papenhuyzen taking the fullback role he will have to slot in at six.

Halfback – Luke Keary
After a disappointing debut in Game 1 of last year for the Blues, Keary looked to have started the season off well leading the Roosters to a two and zero record. An ACL tear in Round 3 against South Sydney haltered his aspirations, ruling him out for the entire 2021 season.

Prop – Josh Papalii
The Green Machine enforcer has struggled with form this season before suspension ruled him out for three games after a send-off against the Bulldogs. In saying this Papalii would have still been an almost guaranteed selection in Paul Green’s Maroons team, with a combination of experience and sheer skill likely to get him a jersey for Game 2.

Hooker – Reed Mahoney
After a promising 2020 season, 2021 has proven to be the breakout year for Reed Mahoney. The Parramatta hooker is one of the key reasons the Eels have started off the year with a nine and three record, with this form resulting in a selection for the Maroons squad. A shoulder injury unfortunately put those plans on ice, ruling him out of Game 1.

Prop – Lindsay Collins
When you think of no-nonsense Queensland players, it is hard to picture anyone but Lindsay Collins. After a breakout 2020 season for the Roosters saw him play all three games in last year’s series, it appeared that he was a certainty for the squad in 2021.

This was before an ACL injury against the Knights saw him wiped out for the entire season.

Second Row – Angus Crichton
Arguably the best second rower currently playing in the NRL, Crichton was a guaranteed starter in Freddy’s Blues line-up. A suspension following the Rooster’s round eleven loss to Brisbane for a late shot on Albert Kelly ruined those plans, leaving him primed for Game 2.

Second Row – Tyson Frizell
The Newcastle enforcer was the other first choice second rower for Freddy’s Blues, before an ankle injury late into their win against the Sea Eagles left him a late scratching. Whilst not playing his best football to begin the year, the culmination of his form from the last couple of games and his experience make him a must pick. 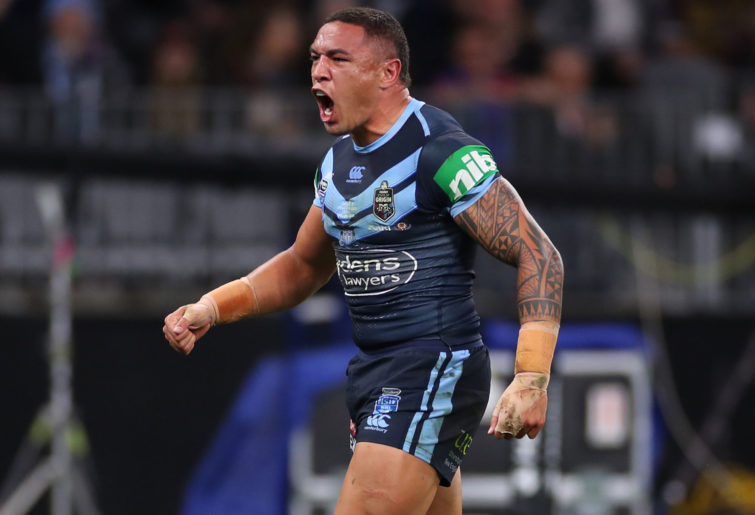 Lock – Victor Radley
One of the main reasons this team was created, Radley looked all but ready to debut for New South Wales before a horror game against the Broncos. Two sin bins and four reports ultimately led to a five-game suspension, costing the versatile front rower not just Game 1, but also Game 2.

Bench – Reece Walsh
The young Queenslander has just six NRL appearances under his belt and likely wasn’t going to get selected before picking up a suspension against the Cowboys, however stranger things have happened. He is filled with talent, and despite still being quite raw, I expect to see him line-up for the Maroons in the not-too-distant future.

Bench – Cameron McInnes
The versatile Dragon was flying high at the end of the 2020 season, making the Blues squad and being extremely unlucky not to have made his origin debut. A pre-season ACL rupture unravelled this hard work, ruling him out for the rest of 2021 before he joins Cronulla in 2022.

Bench – Boyd Cordner
A Roosters icon, the New South Wales captain has not played a game since he received yet another concussion in Game 1 of last year’s origin series. Due to the amount of concussions he has had throughout his career the Roosters have opted not to play him so far in 2021, with Round 17 currently being floated as a possible return date.

Bench – David Klemmer
The Knights enforcer has fallen out of favour with the NSW selectors as of late, however his experience and no-nonsense approach always lends itself to origin. A tackle on Ben Trbojevic did however make the selectors jobs easy, with Klemmer suspended for two games.

18th Man – Corey Allan
2021 has not been Corey Allan’s year, after a brilliant season at South Sydney in 2020 led to him debuting for Queensland last November.

Zero tries in nine appearances culminated in a bad shoulder injury, which is expected to keep him out for at least a few more weeks. His versatility in the back line does however make him a great eighteenth man option.