Thanks for all who offered a question this week. It has become clear that attention is turning rapidly towards Wallabies selection for the series against France.

I am interested in taking our strengths, accepting our current weaknesses and building an Australian team that can at first hold its own and then become superior. Any ideas on where to start?

Nick, who would be your starting hooker for the Wallabies against France? This has been a troubling position for Australia with no clear standout. What are the strengths and weaknesses of the main candidates?

I would start Allan Alaalatoa at loosehead as this is his best position and brings so much around the park.

Apart from maybe Taniela Tupou there is not a single member of the extended Wallabies squad which would be considered for an All Blacks squad.

I think Tupou would be sent away to work on his fitness.

Tupou’s fitness is pretty good despite lugging 135kg. He’s a regular 80-minute player and maintains a high standard in his core role as tighthead prop throughout. His defence looks suspect but it’s very hard to wrap short arms around a barrel with a half metre radius and he’s not the kind of player runners look to attack directly.

Wouldn’t it be incredible if we had a stable, solid front row who played together? But alas…

I will try to examine the Wallaby choices in all departments of the team over the weeks leading up to the series against France, starting this week with the front row.

James Slipper has been injured for the Trans-Tasman competition, but I suspect he will still be the number one choice at loosehead for Dave Rennie when he regains fitness. However, he is unlikely to make it to the 2023 World Cup as first choice at the age of 34.

Who will replace him? Scott Sio is 29 and has shown signs of wear and tear (seven scrums penalties conceded in Trans-Tasman), Feao Foutuaika (one conceded) has had a breakthrough season at the age of 28, while Angus Bell is the best of the young props.
Cabous Eloff (five scrum penalties against) has shown that he can play on both sides of the front row, but is not yet Australian-qualified.

This is what the stats from the Trans-Tasman say:

The outstanding stats outside the scrum belong to Angus Bell, who has only leaked three set-piece penalties in the four rounds to date. He and Allan Alaalatoa (five scrum pens conceded) are by a distance the best defenders in the group, both in terms of workrate and tackle completion percentage.

Bell makes the kind of tackles that are well beyond the capabilities of the Queensland front row:

Bell is taking down two elusive Crusaders backs in an open field – first Will Jordan with a truly outstanding effort off his weak shoulder one-on-one, then Richie Mo’unga – with the Waratahs’ loosehead prop still full of running in the 73rd minute of the match.

His speed over the ground provides added value, because he can play off-tackle as an on-ball threat:

In possession, Angus Bell is one of the four top ball-carrying props in Australia, along with Taniela Tupou, Pone Fa’amuasili and Cabous Eloff:

Now to the nub of the selection issue. If you want to pick Taniela Tupou as your starting tighthead (zero penalties conceded at scrum time) for his set-piece and ball-carrying, it means picking a loosehead who can make his tackles, and keep making them throughout the game.

Outside Slipper, there are only two possibilities – starting a youngster (Bell) or moving Allan Alaalatoa across to the other side, the position where he first started his Super Rugby career. 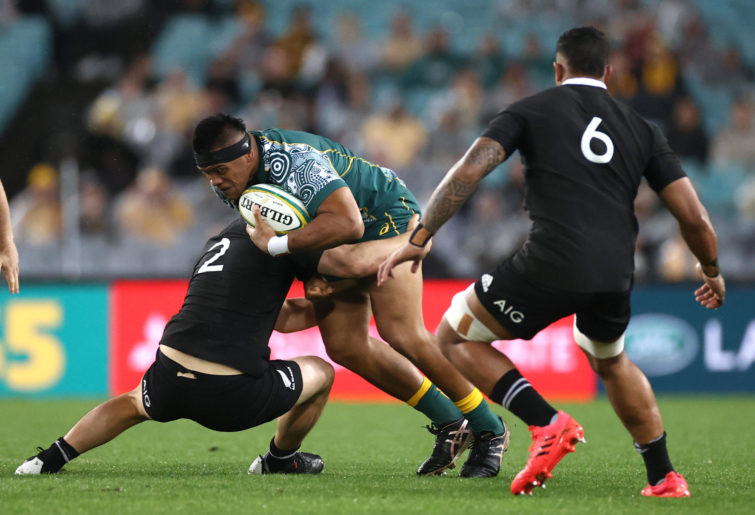 Paenga-Amosa has been unable to make the same powerful impact against Kiwi front rows that he achieved against the Brumbies in Super Rugby AU: 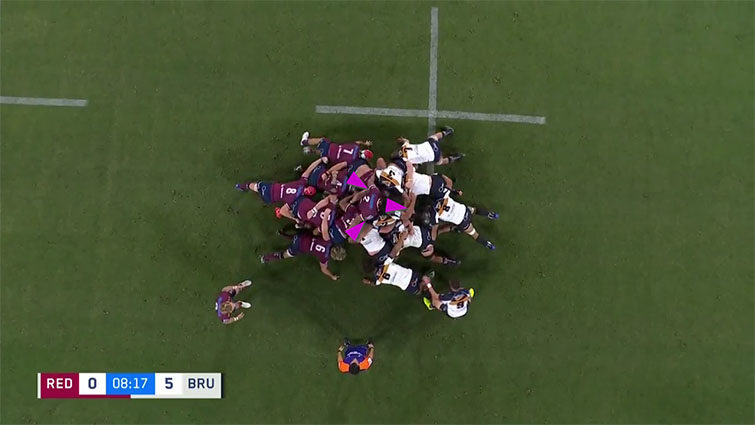 In these examples, the Brumbies’ hookers have been split away from the tighthead completely, and Paenga-Amosa is leading the charge through the gap. He did have things his own way against the Blues front row at the first scrum of the game: 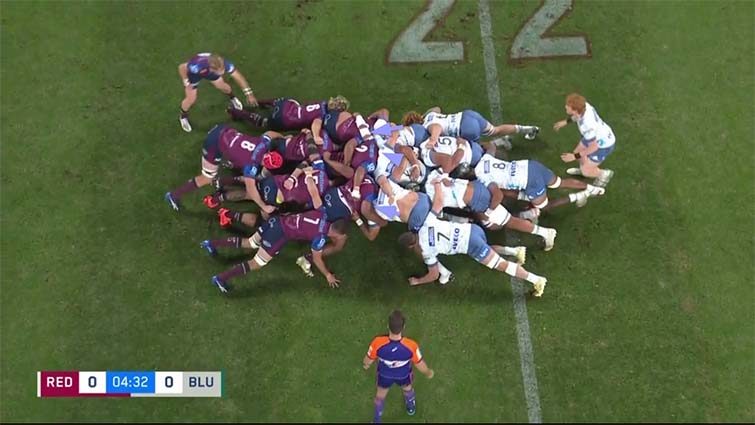 The Queensland scrum has adopted the same ‘anti-Brumbies’ shape as before, but Blues hooker Kurt Eklund and tighthead Ofa Tu’ungafasi have closed the gap. No free pass on this occasion.

The Reds scrum (and Tupou in particular) did not get on top until Karl Tu’inukuafe was replaced by Alex Hodgman:

Does Dave Rennie opt for maximum scrum power or the higher defensive workrate and tackling efficiency of Porecki or Kaitu’u?

I have excluded lineout throwing accuracy from the equation because it is so difficult to disentangle from lineout system failures as a whole: 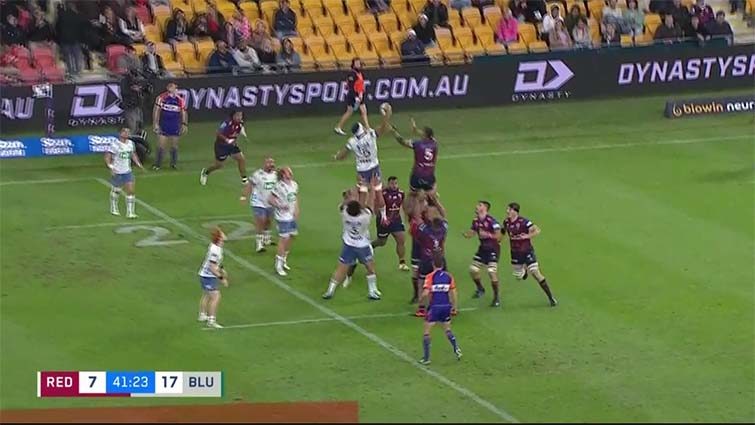 In both of these examples from the second half of the Reds-Blues game, the throws are straight and on the money. The problem lies with a lack of disguise in the call – the Blues clearly read where the throw is going, and in the second instance there is only one potential target – Lukhan Salakaia-Loto at the tail. 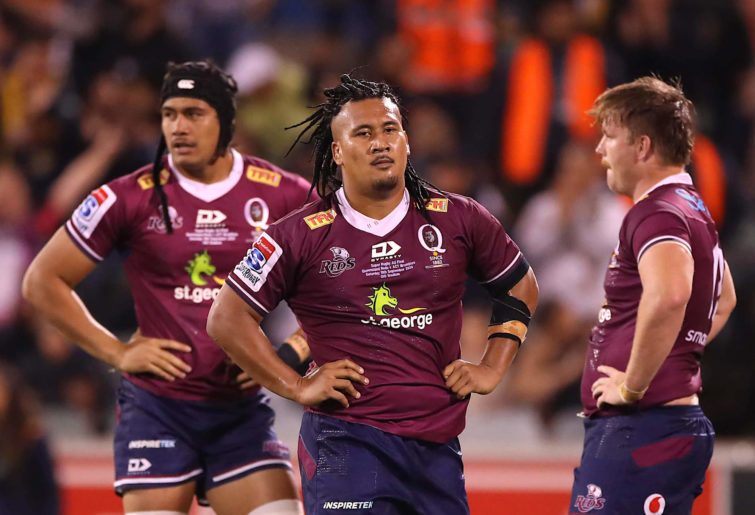 Our two youngest teams, the Brumbies and the Reds, are also our two most successful. This would indicate something in Australian rugby’s pathway system has been amended and is now providing a positive platform for young players to develop. Would you put this down to the NRC, under-18 and under-20 pathways, a combination of both, or simply a better generation of players and recruitment?

It is an interesting exercise to look at this question in conjunction with the front-row selection options above.

If you examine the stats for World Cup-winning teams, a typical pattern begins to emerge. The dominant team of the last decade, the All Blacks, were on average 28 years old when they won the Webb Ellis trophy in 2011. Four years later, their average age stood at 29 years 151 days, with an average Test cycle of 6.5 years per player and over 1000 total caps in the starting line-up.

That compared to a low point in 2003, with the youngest New Zealand team in history – and as Graham Henry acknowledged later, no functional leadership group at all.

The average age of the last Wallaby World Cup winners in 1999 was 27 years and 321 days, while the 2015 finalists were boosted by the return of Scott Fardy and Matt Giteau to 28 years and 288 days – incidentally, exactly the same as England’s victorious 2003 side.

Head coaches typically aim for an average age of 28, with a minimum of 600 caps and 61 per cent win rate from the four-year World Cup cycle. Herein lies the issue for Australian rugby. Too many players leave on overseas contracts at the peak of their powers. Samu Kerevi will be 29 and Izack Rodda 26 in 2023, and both might have been central players for the Wallabies at the next World Cup.

The organic development at both national and provincial level has been disrupted by their absence.

In the front row, Brandon Paenga-Amosa established himself as Dave Rennie’s number one choice at hooker in 2020 at the age of 25, only to leave for a stint in French club rugby one season later. New South Wales rake Dave Porecki is a possible replacement, but has spent the last five seasons playing in the English Premiership. He is only coming back into Australian rugby as a potential Test player at the ripe old age of 28.

If Dave Porecki is a Test prospect now, how much of his playing value was lost to Australia earlier in his career?