Each club's statistical finals probabilities with nine rounds to go

I went back through the last 20 full seasons (excluding the COVID-shortened 2020 season) to give you some statistical likelihoods of the current top eight teams remaining there for September and the teams below them jumping into finals.

The analysis starts with the Essendon 2000 premiership season and runs through the 2019 Richmond premiership season. We’ll look at what the historical probabilities are for each of the 2021 teams with nine games to go.

Here’s the short answer: in the last 20 years, no team sitting in the top three with nine games to go has missed finals. First place teams have a 95 per cent chance of maintaining that double chance (top four), and the only miss was Port Adelaide in 2014.

The Power were first at 11-2, a game ahead of eventual grand finalists Hawthorn and Sydney, but fell to fifth at 14-8 after going 3-6 over their last nine games. They made it to the preliminary finals, but the Hawks beat them by three on route to the second of their three straight premierships. In fact, 16 of those 20 first place teams kept their top two position at season’s end, including ten of 13 with at least 11 wins at this stage.

For the second- and third-placed clubs, there is a 70 per cent probability that they’ll maintain a top-four position after Round 23. Fourteen of the 20 teams in each of their positions have done so since the turn of the millennium.

The Bulldogs, at 10-3, have 15 teams to follow that had ten wins at this stage, and 13 of them (87 per cent) kept their top-four position while eight of them stayed in the top two (53 per cent). Geelong also has a 70 per cent probability as a third-place team of hanging on to their double chance; oddly, having ten wins actually brings the chances down slightly – just five of eight such teams have finished top four (63 per cent).

The difference between the two is that the second-place team has a 50-50 shot at a top two spot, while the third-place team – which would have to pass a team ahead of them – only has a 35 per cent chance. Ten teams out of 20 in the Bulldogs’ spot have maintained or improved their placement by season’s end, including six of the last nine (though not the last two full season examples: the 2019 Pies were 10-3 but fell to fourth, while the 2018 Swans were tied with Richmond at 10-3, and then ended four games adrift).

Basically, these three teams are in great shape.

Make me a double

The Lions and Power, with nine wins each, sit in fourth and fifth, respectively. Over the last 20 years, only one team in each position has reached the top two in the last nine weeks – in 2004, Port were fourth at 9-4 before finishing the season 17-5 in first place on route to their only premiership.

However, this season’s 9-4 clubs are each about 50-50 to land in the top four and get that double chance. According to recent history, Brisbane also has a 90 per cent probability to make finals, while Port’s odds are still a full 70 per cent and, for fifth-placed teams with at least nine wins, the chances are six out of seven (86 per cent).

As different as finishing fourth and fifth are after Round 23, the percentages for the two teams in those two places right now are facing about the same odds coming down the stretch.

The bottom of the top

It’s a good time to point out that the percentages we’re calculating are strictly based on the historical precedents of the last 20 full seasons and have nothing to do with the capabilities of the teams themselves.

Most tipsters looking at these three teams would give the Tigers the best chance of landing in the top four, mostly because of their recent history, and say the youthful Swans are most probable to drop out of finals. 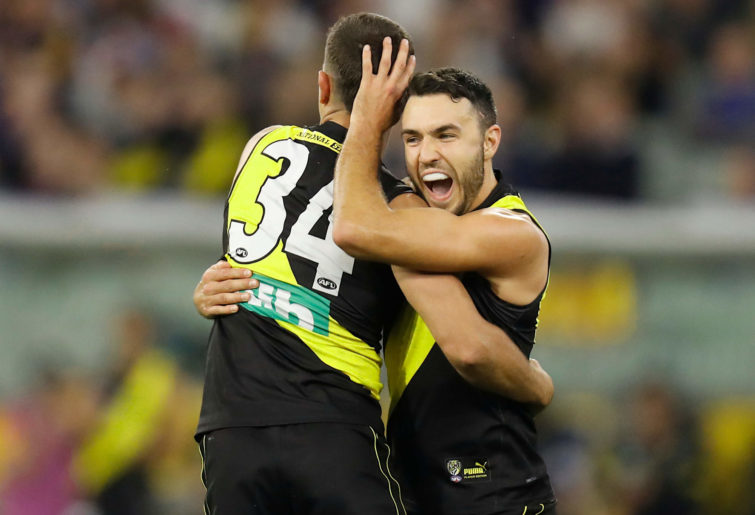 However, of the five teams that moved from sixth, seventh, or eighth into a top two position over the last 20 seasons, four of them started in sixth – where the Swans currently nest. Of the ten that made it to a top-four position, six began in sixth, while two each came from seventh and eighth.

But, if all you’re worried about is making finals, all three clubs have history on their side. The sixth-placed club has remained in the top eight 18 of 20 times – far more often than the fifth-place team has, in fact!

The only exceptions, though, were also 8-5; the 2014 Magpies, who fell to 11-11 and finished a game out of finals in 11th, and the 2008 Lions, who only won two more games and ended the season in tenth, two games back of eighth-place Collingwood. Eventually it all comes back around.

The seventh-place team has completed the finals-bound journey 70 per cent of the time, with 14 of 20 teams staying in the top eight; two moving into the top four but none into the top two. Fortunately for the Eagles, eight-win teams are eight for eight to make the eight.

Finally, eighth-place teams may only have made the top four twice, and both of those times back before my 16-year-old twins were born, but said clubs have a 60 per cent track record of staying in finals. However, each of the last four seasons have seen the eighth-place team following the byes fall out of finals: the 2020 Giants (fell to tenth), 2019 Dockers (fell to 13th), 2018 Kangaroos (slipped to ninth), and 2017 Saints (dropped to 11th).

As much as we like to claim that finalists are set as early as May, there have been some long-range climbs from outside the top eight.

Ninth-place clubs? Eight out of 20 were able to make the eight. Incredibly, four of them made it up to the top four by Round 23, including the last two full-season examples, which were the 2018 Hawks (went 7-2 and moved from ninth to fourth) and the 2019 Tigers (went 9-0 to go from ninth to third). The Giants don’t have to go 9-0, but at 6-6-1, they probably need at least six wins to play in September.

So, you’re saying there’s a chance?

If your favourite team is behind Fremantle right now, there’s good news, bad news and informative news. The good news is that there are teams that have come from farther back than 11th with nine games to go to make finals.

The bad news is that over the last 20 years, we can list them on one hand.

The informative news would be that if you’re serious about this, your team had better be floating at or above 90 per cent if you expect them to have a realistic shot.

Here are the four teams.

If percentage is key, then of the seven teams at the bottom of the ladder, only Carlton and Collingwood have the requisite percentage to get the job done. But if you lived through Richmond’s seemingly impossible run in 2014, then who knows? Maybe North Melbourne rips off the next nine and 10-11-1 gets into finals this season!

Mike Myers and Dana Carvey have the answer to that statement.