Here’s thing about all of the floggings this year: it is all of our fault.

Well, when I say all, I mean all of us who have been yelling for years for more players to be sin binned when they engage in professional fouls, repeated infringements and/or when players get hit high in tackles.

And I also mean the mass of us who wanted teams who were cynically slowing down the play punished so they weren’t able to do it anymore.

Well, we got our wish – and it hasn’t played out that well at all.

For years I couldn’t understand why the NRL would resist taking such actions.

I’ve now got a pretty good idea why: teams trying to slow down the play doesn’t just serve the good sides – as I naively assumed – it also often keeps the lesser sides in the contest.

I’ve been relentlessly banging on about both of these issues since 2013.

However, both of these things happening at the same time has not been good at all. Perhaps just one would have been fine, but both simultaneously isn’t.

Now – as brilliantly enunciated by AJ Mithen this week – we have the most top heavy, lopsided competition I’ve ever seen.

Mithen compared the current state of many games as being a colosseum mismatch akin to the Christians against the lions.

The issue is that, while so many of these games are forgone conclusions well before halftime (and many before kick off), there is no mercy rule.

The dead horse keeps getting flogged for the full 80 minutes.

It is the NRL equivalent of the 1980s movie Weekend at Bernie’s where a corpse is dragged around through multiple scenarios for an extended period of time. And just like that movie, it isn’t entertaining or funny in the slightest.

I usually watch at least six games a round, if not all eight. This season I’ve found myself watching four or less. My only real interest in many of them is to follow the progress of a same-game-multi I may have put on.

In short: I adore the NRL but I’m a bit bored.

I decided to have a look at the statistics to examine just how the combination of the rule changes to speed the game up, alongside the high tackle crackdown has effected the margins in matches on average.

In 2020 there were almost four games a round that would result in 13+ margins. However, 40 per cent of those games were decided by no more than 19 points. While that’s a solid win, it isn’t a flogging.

There were 46 wins out of the home-and-away season’s 160 games that were by margins of 20 points or more. Seven of those were 40-49+ floggings and two of them were 50+ slaughters.

This season after just 116 games there has been 72 games that have resulted in 13+ margins. That is just four shy of what was achieved in 160 games in 2020. Already 52 games this season – that’s 45 per cent of them – have been decided by margins of 20 points or more.

So where have the changes occurred?

The big change is that there are 14.6 per cent fewer 1-12 results. Those games seem almost entirely to have turned into 20-29 point results. We can now only rely on three games in a round having margins within two converted tries.

The upshot of all of this is that 45 per cent of the time the matches are completely one sided slaughters.

Even the fans of the teams doing the slaughtering eventually won’t be interested in that sort of game for long.

And for those of us supporting the ten teams who aren’t even vaguely in the hunt this season, we certainly aren’t interested – even though our sides mostly are the ones in the close games.

Of the 44 matches that have been 1-12 results so far in 2021, 29 of them (66 per cent) have been played between the teams from seventh spot on the ladder down. So the close matches are mostly not being played by the contenders that will draw big crowds and high television ratings.

I will be stunned if this year’s premier isn’t either the Melbourne Storm or the Penrith Panthers. The only other sides that could possibly jag a result are the Eels, Sea Eagles, Rabbitohs and Roosters.

While there are always dominant sides, not to this level. 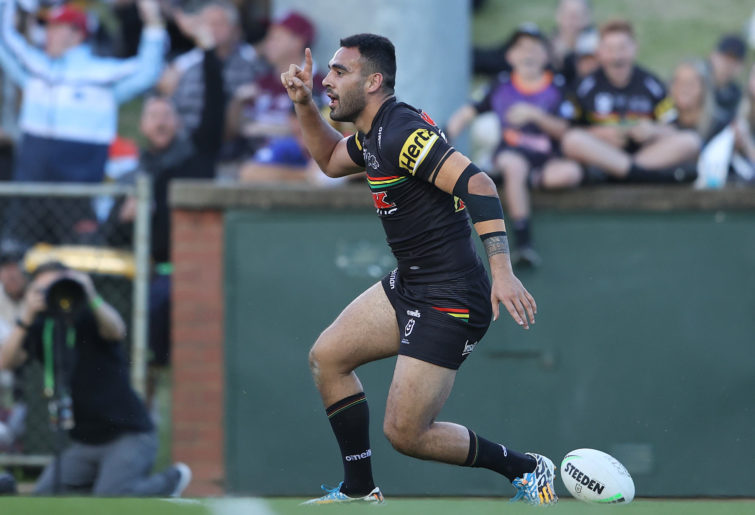 Tyrone May of the Panthers celebrates after scoring a try. (Photo by Matt Blyth/Getty Images)

The combination of the sin bin crack down and the set restarts have introduced such fatigue into the games that once a side gets a roll on the rest of the match is literally just dragging Bernie’s corpse around the field.

So what can be done? Well, we have to protect the head of players so the sin binning – while I pray for consistency and ration in their application – needs to continue.

Further, I hated wrestling, offside play and other slowing tactics, so I want the set restarts to continue.

The changes I see that might help mitigate sides getting so fatigued that they get slaughtered hark back to Super League.

Firstly, the amount of interchanges has been steadily reduced since the days of unlimited changes in the 1990s. This has been done deliberately to introduce fatigue and through that facilitate scoring. Perhaps we need to increase the number of interchanges allowed per side right now.

Further, we have been seeing a pattern of sides scoring try after try, while their opponents are starved of possession. Perhaps reinstating the briefly trialled rule of the scorers kicking off could partially assuage this factor.

Another idea is the five minute sin bin coming back in so sides aren’t destroyed while a man down.

Something certainly needs to be done.

As much as it pains me to admit it, the NRL does need to be managed to ensure that it is an entertaining package that people want to watch and get excited by.

Because these constant Weekend at Bernie’s sequels are just dreadful.