Coach’s Corner Issue 19: What can we learn from the English Premiership final?

Thanks once more to all those who contributed a question, or to the subsequent debate at the call-out stage.

Should we really be worried about the large possibility of Tate McDermott/Noah Lolesio, and other combinations being trialled, or embrace it for the depth development opportunity it is – still a decent time out from the next World Cup?
– Busted fullback.

I am genuinely looking forward to this Series. 22 new French caps. Tells you the depth of their program and commitment for 2023. See what experiments the Wallabies are willing to undertake particularly in the 9/10 axis
– Aussieinexile.

Assuming O’Connor is out and the halves are McDermott and Lolesio, then they have an average kicking game. Surely you need a game plan around their running strengths?
– PeterK

If they are the halves, is there anything you would do to try and strengthen the kicking game? For example, would you bring Hodge into the starting team at 12 or 15; or say, have two kicking wingers? I would probably want Hodge on the field for his experience alone. Numpty Odds on Hodge at 10?
– Muglair

The gates of selection in midfield have been thrown wide open with the French battalions marching across the horizon – on both sides! France will field an entirely new combination compared to the one with which they finished the Six Nations earlier in the year.

In the final round against Wales, they started with Antoine Dupont at 9, Matthieu Jalibert at 10 and Gaël Fickou at 12. With none of those on tour, the combination for the first Test in Brisbane is likely to be Baptiste Couilloud and Louis Carbonel in the halves, with either Arthur Vincent or Jonathan Danty at 12.

The injuries to Nic White, Jake Gordon, James O’Connor and Matt To’omua have thrown the Wallaby midfield planning into disarray. As I pointed out on Wednesday, Nic White would have been expected to handle much of the kicking load for the Wallabies, and Tate McDermott is not the same kind of ‘strategic’ scrumhalf.

A brief but telling point of comparison emerged from the English Premiership final over the weekend.

The conclusion of the kick return can be viewed on this highlight reel.

The issue from the kicking side is that there is no strategic sense behind this type of exit. It gives
the receiver an easy catch, and Jordie Barrett the opportunity to build up 10-15 metres worth of steam on the return. After only two passes, the outcome is a penalty try and a yellow card for the Reds’ Bryce Hegarty.
The scrumhalf has to be able to vary his length in order to cause the receiver maximum discomfort:

The first kick by Danny Care (from the Premiership final between Harlequins and Exeter) is designed to force the receiver backwards – eventually all the way back to the Exeter 35 metre line. That plants a seed of doubt and hands the initiative to the kicker. Now he can exit high and short in the knowledge that the same receiver will be slower coming forward.

In Wednesday’s article I also explored how the relatively short passes off Tate McDermott’s left hand can impact the options chosen outside him. Let’s look at another point of comparison with Danny Care:

There is a lift before the ball is delivered, so it’s not perfect technique – but ultimately, the pass leads the receiver (Quins’ flyhalf Marcus Smith) in the direction he wants to go, opening the width of the field rather than denying it: 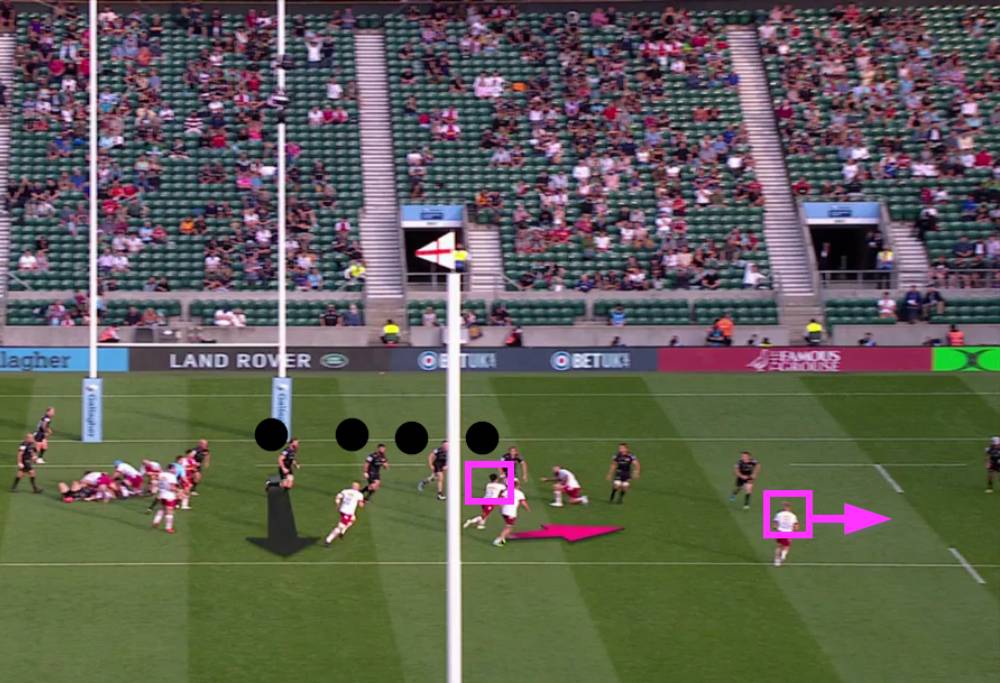 The Exeter forwards are too tight to the ruck, so Care’s pass hits the outside corner of the ‘strike zone’. The finisher is an Australian – Michael Lynagh’s son Louis!

If Tate McDermott and Hunter Paisami are two members of the Wallabies starting midfield, I believe there is a very strong case for the inclusion of Reece Hodge as a kicker, cleanout support player and defender: either in between the two at outside-half, or playing with Paisami in the centres, with Noah Lolesio at number 10.

* Who would be your Lions Back-Row? What do you make of some comments that say Sam Simmonds is too small to play the Springboks? Also, is Marcus Smith a Test 10? Sinckler for the rules. What’s your take on the Lions’ call ups? Adam Beard should fit right in and Josh Navidi will be monster off the bench. Will they call up a fourth hooker with Cowan-Dickie’s injury?
– Aussieinexile

What makes Marcus Smith so special, do you think he’s suited to heavyweight Test rugby, and will Eddie countenance someone so different to Ford?
-JD Kiwi

The non-selection of Marcus Smith at number 10 has become as much of a media thorn in Eddie Jones’ side as his refusal to pick Exeter’s Sam Simmonds in the back-row. As this example shows, Smith is very good at identifying weaknesses early and moving on to the ball so that he can exploit them:

In this instance, the first and second Exeter defenders are struggling to stay connected and Smith immediately spots the gap.

Here, he uses a goose-step to fix the last man in the front line and put Lynagh through the hole for another try.

Warren Gatland probably permitted himself a smirk of glee when catapulting Sam Simmonds straight over the England selection process and into his British and Irish Lions squad for South Africa. On the evidence of the Premiership final, neither second row Johnny Hill nor Simmonds deserve to be in the Lions squad. Hill’s discipline is ragged –he picked up four penalties and a yellow card in the game – while Simmonds’ choices in the wide channels led to a stream of turnovers:

Three clear-cut opportunities down the 5-metre corridor, three turnovers. Perhaps Eddie is right about Sam Simmonds after all? At least Josh Navidi has now taken his rightful place on the plane, where he should have been all along.
Harlequins’ two starting props, England’s Joe Marler and Springbok Wilco Louw were also outstanding in the final, as the London side enjoyed the lion’s share of the penalties and go-forward in an area (the scrum) where Exeter routinely like to show their power:

Louw scored a try as well as contributing to Quins’ domination of the set-piece: all things being equal, he looks at least as good an option as Vincent Koch on the South African bench. The inimitable Marler meanwhile, rammed home the fact that he should have been an automatic pick for the Lions tour at loosehead prop. He played the full
80 minutes, making 9 runs and 11 tackles and proving a thorough on-ball nuisance at Exeter rucks:

Marler dominates the cleanout collision with the Chiefs’ Jannes Kirsten, but still has the presence of mind to pull out of the contest after the ruck has formed. This is ‘the new Joe Marler’, who has had his share of problems which was explained in a recent Sky Sports documentary.

* Would love to see some actual analysis around Hooper’s captaincy. Perhaps compare and contrast Hooper with James O’Connor for the Reds this year and maybe some of the others?
– Zero_Cool

Geoff Parkes wrote an article about taking the three points, or not. How do we prepare our captains to think through game scenarios and to assess the tactical decisions? Do we give then any guidelines for decision-making as part of the game plan? Probabilities to convert line outs, kicking penalties – or are we just hopeful that the captain may get it right?
– Ex-Force fan

At the start of the week, Geoff Parkes wrote an article which began an exploration of captaincy over the coming weeks. He pointed out, quite rightly, how little control over the tactical affairs of the team a captain now enjoys.

“In rugby, captains make decisions in the run of play, such as deciding whether to kick for touch or goal, but these are comparatively few compared to the strategy determined by the coaching team, or even decisions made in the match by the teams’ playmakers.”

One of the main criticisms of the Wallaby captain Michael Hooper has been that he chooses to kick for touch and a lineout, rather than ‘take the three’ (points on offer via a kick at goal). In reality, captains have very little input into the making of such decisions, which tend to occur in the pre-game preparation and strategizing. Some of the startling stats from last weekend’s English Premiership final illustrate just how advanced the ‘theory’ behind taking lineouts rather than kicks for goal has become.

The first penalty kick at goal did not occur until the 66 th minute of the match – a point-blank effort from Exeter’s Joe Simmonds. In the course of the game, nine out of ten kickable penalties (within 40 metres of the posts) were rejected in favour of attacking lineouts inside the opponent’s 22.

From those nine scenarios, Exeter and Harlequins between them produced six tries, five successful conversions and three yellow cards squeezed out of the opposition for cynical offences close to the goal-line. The risk-reward balance was therefore heavily weighted in favour of obtaining lineout and attackingposition ahead of ‘taking the three’.The decision-making process had clearly been pre-programmed before the players ever stepped on the field: 59per cent of the ball-in-play time in the final derived from scenarios where a goal-worthy penalty was kicked into touch.

This is one aspect of the game where all captains, including Michael Hooper, are definitely ‘under orders’, and very far from making the tactical decisions off their own bat.

Thanks once more to all who contribute at call-out time, and then on the forum afterwards.