How Super W can continue to improve

Sure, the Wallabies team has been announced.

Then on the local scene was the announcement of the sevens squads to go to the Olympics. Naturally this receives a lot of coverage. The women’s sevens has been our most successful and recognised rugby team and have been over the last five-plus years. In addition, there was interest in who wasn’t selected in the women’s squad and that Samu Kerevi was selected in the men’s squad.

As a consequence, there has not been much space (and maybe interest) to cover other rugby.

Anyway, let us put all that aside and focus on the weekend’s culmination of the Super W competition, which due to COVID and various reasons changed from the usual home-and-away season to a shortened centralised tournament played over a couple of weeks and based in Coffs Harbour.

Rugby AU, Buildcorp, Stan Sport and the players put on a very good and exciting tournament. It involved a bunch of players who play for the pure joy of the game, representing their state or team and don’t get paid a zac.

While it didn’t get a look-in with the Sydney press for some reason, or this forum, it was a terrific competition. Anyone who watched a game or two found it highly enjoyable. It was good to see the increased discussion about Super W on the Twitterverse as more rugby fans gave it a try.

I have to thank Stan Sport for providing coverage of the games, and Rugby Heaven for a terrific interview with Tahs lock Sera Naiqama. 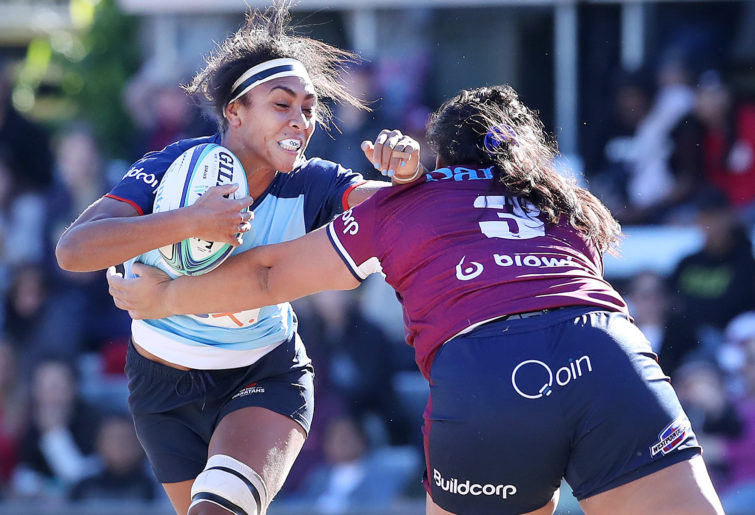 It seems that many rugby supporters were unaware of the Super W competition but they probably are not big club rugby followers. As a consequence they are not aware that many clubs have sevens and XVs women’s squads. Both Sydney and Brisbane club rugby have nine-team women’s competitions.

The Super W competition included the five Super Rugby teams and a President’s XV. The President’s XV was made up of players on the periphery of their state teams and therefore ensured there was not a bye. Unfortunately, halfway through, the Western Force team had to withdraw and head back to Western Australia due to COVID and border closures. On finals day, a further team was put together – the Super W select team made up of some of the reserve players and some local Coffs Harbour players. As a result finals day had three cracking games.

As has been the situation since 2018 (and understandably so), New South Wales and Queensland have been the front runners. This year with the Reds going through a rebuild they had a lot of young, inexperienced players. As expected the NSW Waratahs took out the competition again. They have a great combination of experience and skill and have introduced some youth.

The Tahs’ back row included Wallaroos veterans Grace Hamilton and Emily Chancellor and a 20-year-old blindside flanker Piper Duck. In the middle of the competition Piper Duck had to head up to Townsville to play for the Oceania Barbarians team at the Oceania sevens, so she is a bit of star on the rise.

During the competition the Tahs were at times a bit rusty but in the final they dominated the collision with some great play by their locks Kaitlan Leaney and Sera Naiqama. The set piece provided the backs with the platform to run in some great tries. If you have not already done so, check out the Stan Sport minis of the games.

While the first 20 minutes were tight, in the end the Waratahs ran away with a 45-12 win over the Reds.

Some of the other takeaways:
• The players’ skills improve each year.
• The players don’t get paid but still put in a mighty effort.
• The value and joy of playing rugby with your teammates.
• It is tough playing three games in seven days. Some of the players were a bit bruised and battered.
• It is great taking games to the regions.
• It is terrific to hear some new commentators including Gemma Etheridge, Mollie Gray and Alicia Lucas.
• The women played on a quality ground. The C.ex Coffs International Stadium, Coffs Harbour was in pristine condition.
• It is a great opportunity for some country players. The Super W select team included players from SCU Marlins, Hunter Wildfires, Coffs Harbour Snappers, Dubbo Roos, Wauchope Thunder and Bathurst Bulldogs.
• It is critical that Rugby AU provide more support for these players to assist women’s rugby to continue to grow and compete with the other football codes.

Unfortunately, the women get the rough end of the pineapple when it comes to the internationals. They have not played a Test since 2019. After this tournament a Wallaroos squad was to be selected to play two Tests against Samoa but that has now been postponed. Hopefully they will get a run at some stage.

With the introduction of two more NRLW teams Rugby AU will need to keep an eye on these players. It would be expected that the NRLW teams (especially the new Newcastle team) will have been looking at some of the players who played over the weekend. In addition if Rugby AU wants the women to compete in next year’s World Cup and the new WXV global competition in 2023 they will have to up the ante in support of the players and the Super W competition.

As mentioned earlier, if you have not already check out some of the Stan Sport minis of the games from the Super W competition. Now I’ll hop off my soapbox.

Reece Hodge will be named in the Wallabies’ No.15 jersey today replacing injured Tom Banks, with Dave Rennie opting for the Melbourne Rebels utility ahead of James O’Connor.

It all began on the 13th August 1921. New Zealand versus South Africa may not be rugby’s oldest rivalry, but incorporating the two nations who take rugby more seriously than anyone else, it is indisputably the game’s greatest.