The Pies, a team that lost a coach and president the year, were convincing 45-point winners over an Eagles team that can’t travel in 2021.

The 17th-placed Hawks have been belted around the media in recent times and worked over a top-four contender in the Lions. They did it with heart, grit and daring. The 12-point Hawthorn win in Tasmania prompted Brisbane’s head coach Chris Fagan to say this:

“Any side can beat any other team on any given day.”

Over in Perth the Dockers, who are looking to claim the eighth spot and a finals berth, surprised everyone when they held on for a gutsy four-point win against the Tigers, an ailing champion that has lost its way but were also hoping to inch further towards the top eight. Dockers coach Justin Longmuir praised his team for their consistency.

“We did the right things at the right time a lot of the time,” he said.

With three weeks to go before finals, you’d expect the top eight teams to be settled in their approach and mindset, in almost a clinical fashion where they know what they have to do in the twilight of the regular season. But with lockdowns and COVID-19 wreaking havoc with scheduling, plus lower-placed teams treating each week with nothing to lose, it’s made us all stop and wonder what the hell is going on and, will the unpredictability last?

To football fans, the results from Round 21 might seem off, but the Bulldogs, Cats and Demons still lead the competition. The big observation from the weekend is that Brisbane has sunk to sixth after flirting with a top-four spot for most of the season. The Swans, fresh off a classic shootout win at the MCG against the Bombers, are now in fifth ahead of the Lions, making their case for a top-four spot along with Port Adelaide, who are actually fourth.

The Lions are 1-3 in the last month. What seems to have worked for large parts of the year has stalled. Their sole win came against an insipid Gold Coast Suns team, which isn’t saying much. Fagan observed his troops were missing intensity and pressure against the Hawks. No doubt he will start to have concerns about whether or not the Lions’ best football will be able to stand up in finals if they can’t fix it.

The Eagles continue to disappoint on the road and at home too. They have gone 2-4 in the last six weeks. They don’t look like winning a game away from home and at Optus they seem like a 50-50 chance — far from the dominant team that had a fear factor in Perth. Confidence is down. They’re missing Luke Shuey, Willie Rioli, Liam Ryan, Jack Redden and Tom Barrass. But most teams at this time of year are missing a chunk. West Coast are a team that can’t be trusted, and yet, they’re at a middling 10-9 sitting in the seventh spot.

Even though the Dockers beat reigning premiership team Richmond by less than a goal, their form has been shaky at best. In the last seven weeks, they’ve gone 4-3. It must be noted that all their wins were against non-finals teams and they couldn’t compete against Cats (lost by 69) and or the Swans (lost by 40). To play finals, teams like the Dockers need to beat contenders. Fremantle are still yet to prove they can.

As the year has rolled on through the pandemic, Richmond’s wheels have fallen off in a remarkably sluggish way. They’ve only been able to manage one win against the Lions over the past seven weeks. Losses have piled up against low-end, middling and out-of-form teams: the Suns, Saints, Pies, Dockers and Eagles.

The 38-point loss to Geelong was a statement that the Tigers are very much off the pace to be a contender. The injuries have hurt: no Dusty, Noah Balta, Nathan Broad, Dion Prestia, Ivan Soldo or Nick Vlastuin. We’re witnessing a champion being slowly unravelled. 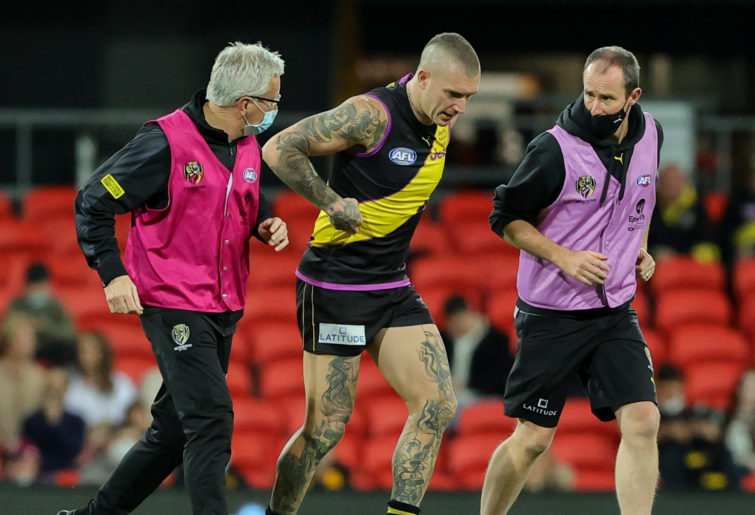 This could be a year that a new team takes an opportunity. The Demons could be that team. But they’ve shown periods where they’ve lost form in a hurry. Perhaps Geelong, who have been a constant when it comes to playing finals over the last decade, will finally make it work. They look like the real deal to go one step further with their new recruits.

And the Bulldogs seem like an obvious choice to claim the flag, but it would take a brave person to lock that in from here.

We’re at the end of the year where fatigue is real. Now, there’s the added stress of travelling to other states to avoid lockdown and COVID-19. Injuries are still happening. Teams will be forced to delve deep into their lists to cover for all of this, which will impact connection and cohesion.

Among all this are teams hanging on to hope to play finals. It will be the consistent teams, the ones that can just get the job done – at home and on the road – which will determine who gets to play finals.

This will be a season defined by who is least affected by the distractions of the pandemic. Those that can put their head down and grind away will get rewarded. Those that don’t will find solace in the off-season where players can see families and rest their tired bodies.

After the Tigers’ loss to the Dockers, Richmond’s head coach Damien Hardwick lamented that 2021 has been a “really weird year.”

The clock is ticking for some teams and there’s still hope for those peering into finals. The season is dwindling. But with so many clubs losing games they should be winning from the weekend, the premiership coach summed it up best with: “It’s going to be one hell of a finish.”