'Short rebuild or try to spring back immediately': Their reign over, Richmond stand at a fork in the road

Richmond was mercilessly whipped by Greater Western Sydney last Friday night, officially signalling the end of their season – and most likely their premiership era.

The season was long gone before the final nail in the coffin, as we had identified periodically along the way, due to their unsuitability to rule changes or inability to prevent runs of opposition goals.

Either way, due to lack of defensive pressure and structure, the Tigers were never the same in 2021 and no less than a bottom-four side post-bye due to some particularly abject performances.

Is their flag run with this current group over as well? Almost certainly.

Hawthorn of the 1980s were supposedly done after finishing fifth and losing an elimination final in 1990, but regathered for one last premiership in 1991. Geelong were written off after a shellacking in the 2010 prelim, but went all the way in 2011. Brisbane took a decade and a half to recover after their 2001-03 threepeat, while Hawthorn are down in the murky depths still since their fabled feats of the mid-2010s.

The key difference here is that none of those teams fell like a rock before rising for one final flag or in chasing a fourth trophy. Hawthorn still finished top four in 2016 and Brisbane made the grand final in 2004.

Those clubs also weren’t contending through a pandemic, and trying to maintain hunger and intensity during a time of uncertainty and confusion. This was surely a factor in the drop-off this year – everything just becoming all too hard, particularly given multiple flags for most the group.

So, what sort of future can be predicted for Richmond?

The downside means that this year should have been one of prime contention for them. But does the quick fall from grace enable them to reload and reset? Will they take a short rebuild or try to spring back immediately?

The direction a club takes in this critical time usually centres around the age of their champions.

Joel Selwood and Tom Hawkins were young enough in 2011 that Geelong could stay competitive and build a team around them, particularly by targeting players from other clubs like Patrick Dangerfield. They have become masters of the mature-age recruit, and it may well deliver them the ultimate goal this season.

Hawthorn’s champions in 2015 and 2016 were of the older variety. When they got bundled out in straight sets in 2016, Sam Mitchell was 33, Luke Hodge and Josh Gibson 32, Jordan Lewis 30, and Jarryd Roughead turning 30 and coming off serious illness before the 2017 season commenced.

Alastair Clarkson famously decided to jettison his older guard to chase younger blood from other clubs, similar to the way Geelong managed their veterans, and got it horribly wrong.

Brisbane’s 2004 losing grand final side actually had most of their champions under 30. Jonathon Brown was only 22 and Simon Black 25, but they had a number of players in their late 20s – Jason Akermanis, Chris Johnson, Clark Keating, Nigel Lappin, Justin Leppitsch, Mal Michael, Chris and Brad Scott, and Michael Voss.

That’s a lot of high-quality players crossing 30 and falling off a cliff together. The Lions wouldn’t truly contend again for another 15 years.

Dustin Martin has just turned 30, still has three more years left on his contract, and could play until he is 35. He is the ace in the pack that Richmond will try and help deliver another premiership.

Jack Riewoldt and Trent Cotchin will be 33 and 32 next season, and are surely on their last legs. It’s impossible to think they’ll be playing in 2023. Shane Edwards was a young 31 last year, but possibly an old 32 now as a few injuries have started to catch-up. He turns 33 in October. 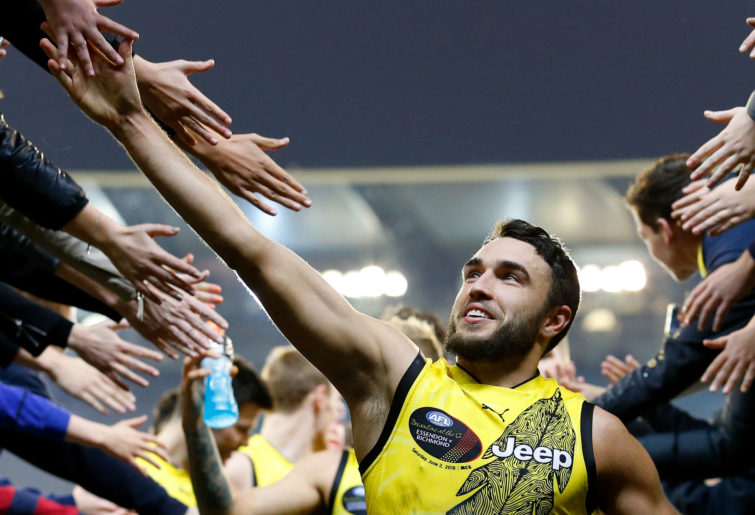 When picking the five key players to the Tigers’ glorious era, it’s these arguably these four and Dylan Grimes. They don’t just grow on trees.

Bachar Houli is 33 and wants to play on but is starting to miss more games than he plays through injury. There’s a tough conversation coming there. David Astbury announced his retirement on Tuesday. Both are triple premiership heroes, with Houli finishing second in two Norm Smiths.

It’s a very, very solid core, but is it a premiership-driving champion core? The answer has to be no.

Add of all these players together (15 mentioned so far) whose best football is either behind them, or at least not in front of them, and it gives some idea of why it’s so hard to say in contention for longer than four or five years.

Every successful group thinks their wave of younger players will stack right up against the players that have come before, but they rarely do. It’s a different story offering tantalising cameos or picking up an easy 30 as the 15th or 18th best player, compared to being asked to do it week in, week out as one of the best six or eight.

The younger generation of premiership players in their early-mid 20s is led by the electric Shai Bolton, 2020 best and fairest winner Jayden Short, and Jack Graham, who gives every impression of being a captain-in-waiting.

Jason Castagna is 25 years old and hasn’t been at his best this season, but Daniel Rioli (24) is looking good in his new position behind the ball, and Liam Baker (23) has been impressive in multiple roles in all areas of the ground in his 63 games. Good judges expect Noah Balta (21) to be an All Australian at some point in his career.

Sydney Stack finished third in the 2019 Rising Star and can do things on a football field that most can’t. Riley Collier-Dawkins, Jack Ross and Thomson Dow are young midfielders that have shown glimpses in the last year or two, but whose careers could still go either way.

Damien Hardwick has blooded five other players aged 21 and under this season as the clubs looks to regenerate on the run.

There’s enough there to suggest a team that could stay competitive with the eight, maybe win somewhere between ten and 12 games a season, but they’d need a few of these players take a quantum leap to rocket into top-four contention again, alongside a gun free-agent.

Richmond do have a strong draft hand this year, and after being linked to Adam Cerra at various stages it appears they will be looking to youth. Premierships mean salary-cap squeezes, so there shouldn’t be much spare cash to splash around on players from other clubs.

As the ladder currently stands, the Tigers have pick 8, 17, 26, 27, 41 and 45. They may look to package some of these up to move higher, swapping picks with a club that might be happy to trade down for draft points. Otherwise they can back in their recruiters and try to land gold with a couple of sliders or hidden gems.

Richmond’s 2021 season is over as of Saturday evening and it won’t be too long after that we see which direction the club is going to head.

Contract extensions for the older players, or forced retirements and de-listings? Some premiership soldiers offered up for trade, or back the playing group in to go again?

Whatever the case, the impact of the decisions over the next month will be felt for years at Tigerland. For better or worse.