Why the Wallabies are still looking for fool’s gold

It is not always easy to tell fool’s gold from the real thing.

Both have a similar yellowed, brassy hue. Both have, from time immemorial, caught a prospector’s eye when sieving for their fortunes. That sudden glint, reflecting brilliantly in a ray of sunlight, is more than enough to create excitement.

The wisest learn quickly how to distinguish genuine gold from pyrite. Gold is much softer and more ductile, and is often found alloyed to other valuable metals like silver.

Wallabies head coach Dave Rennie must be concerned that so many of his players, even the most experienced ones, are still falling into the same traps and mistaking fool’s gold for the genuine article.

He said as much at the post-match press conference after the 57-22 walloping by the All Blacks at Eden Park.

“We made some really poor decisions defensively and got exposed down short sides, and a couple of intercepts when there was clear space in behind to put the pressure on them,” the coach said.

“If they are going to play high, you have to turn them around and put the ball in behind them. It was disappointing, not seeing that and not communicating it.

“What we know is that you have to defend well against the All Blacks. If you can reduce them to about 20 points or less, they lose more then they win. That was certainly a goal heading in, and that will be important for the next one.”

The first step is to expect a big reaction from the men in black once you run them close, or beat them. Towards the end of the Michael Cheika era, Australia beat New Zealand 47-26 in Perth one weekend, only to lose by 36 points to nil at the Eden Park graveyard the following Saturday.

The glow of a 16-all draw in Dave Rennie’s first match was eradicated swiftly by two resounding defeats, by a combined score of 70 points to 10 in 2020. Now, the hope generated by another narrow margin of defeat has been banished by a 35-point loss on the next weekend.

So far, the big picture in Rennie’s prophecy – to restrict the All Backs to 20 points per game – has not been fulfilled. The running average is 33 points per game conceded against Australia’s nearest neighbours.

The requirements of the detail are not being satisfied either. Towards the end of last week’s article, I looked at Hunter Paisami’s game-changing second half interception. The Australian centre did not see Kiwi number Richie M’ounga sneaking up from the backfield to break on his long delivery towards Jordan Petaia on the right, and the result was a cheap seven-pointer for the men in black.

On Saturday, it was the turn of Australia’s other two playmakers in chief, Noah Lolesio and Matt To’omua, to repeat the same mistake.

Kiwi number 13 Rieko Ioane is rushing straight upfield, and he has no concern whatsoever about cutting loose Australia’s last two attackers near the left touch-line in order to manufacture a potential 14-point turn-around.

It is worth looking at the second event in greater detail, to observe how quickly the picture can change at international level. Here are the bare bones of To’omua’s intercept pass.

At the beginning of the play with the ball in Lolesio’s hands, the snap-shot looked like this. 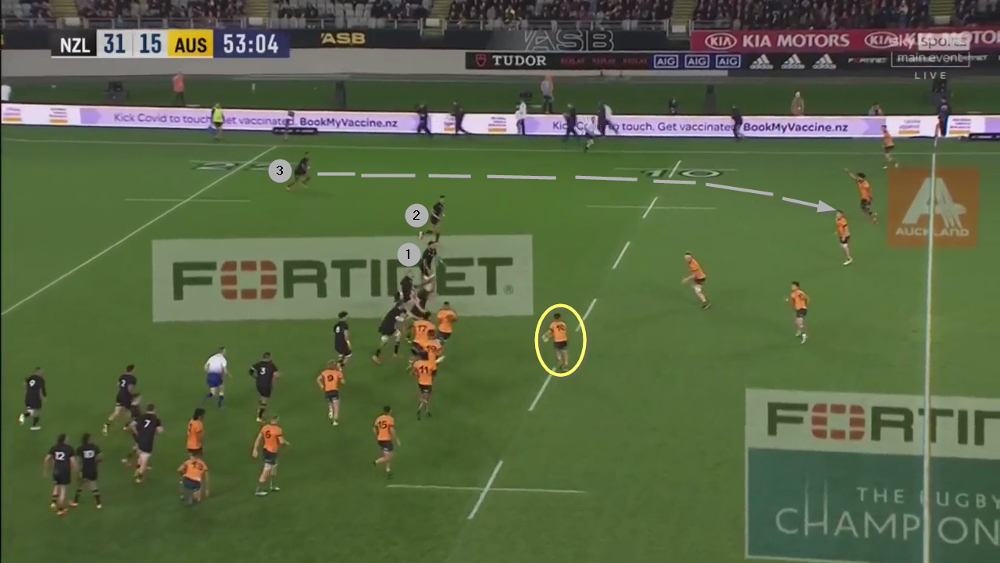 At first glance, it looks promising. There are four Australian attackers (To’omua, Michael Hooper, Rob Valetini and Andrew Kellaway) strung out to the right versus only two New Zealand defenders, with left wing Sevu Reece 25 metres distant in the backfield as Lolesio goes to pass the ball.

By the time To’omua was ready to to pull the trigger, the situation had changed. 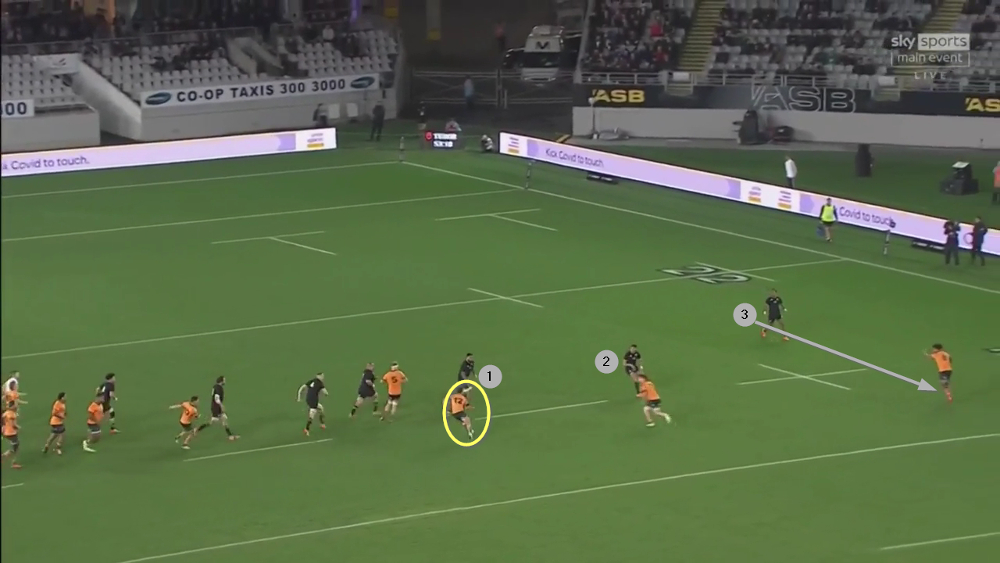 Reece has closed to within ten metres of Valetini, and the pass needs to travel more than 20 metres in the air, off To’omua’s left hand to beat him. This is rugby’s equivalent of fool’s gold in the modern era.

The Australian inside centre sees the flashing glint of Kellaway unmarked on the right, but the relative density of Reece’s movement weighs more heavily in the scales. In the current age of rugby, the pass does not beat the man.

It is a lesson in how quickly modern defences can change the picture for the attacking side, but there is still no excuse for the Wallabies’ main play-makers authoring the same error three times in two successive games.

Rennie also mentioned the Wallabies’ short-side defence in dispatches after the match. Like the interception problem, this has been a recurrent issue.

This November 2020 article concludes with the statement that “The Wallabies are losing their grip on the processes involved in how to stop the Kiwis scoring more than 15 or 16 points, which Rennie knew was essential to a chance of success against his trans-Tasman rivals.

“Nowhere is this more true, than in the defence of the short-side from set-piece, where Australia seem unable to respond to the All Blacks’ variations and late movement on attack.”

New Zealand made a big point of attacking Australia down the short-sides they created from lineout drives in 2020, and there was little sign that the issue had been addressed at Eden Park.

These are two versions of the same error. The rule for the defender in the ‘guard’ or ‘pillar’ position closest to the ruck is implied by the name. He must be the pillar around which the defensive line can be built, and he must never leave his post and go AWOL without an ironclad reason.

In the first example, second-rower Darcy Swain dives in on Aaron Smith. 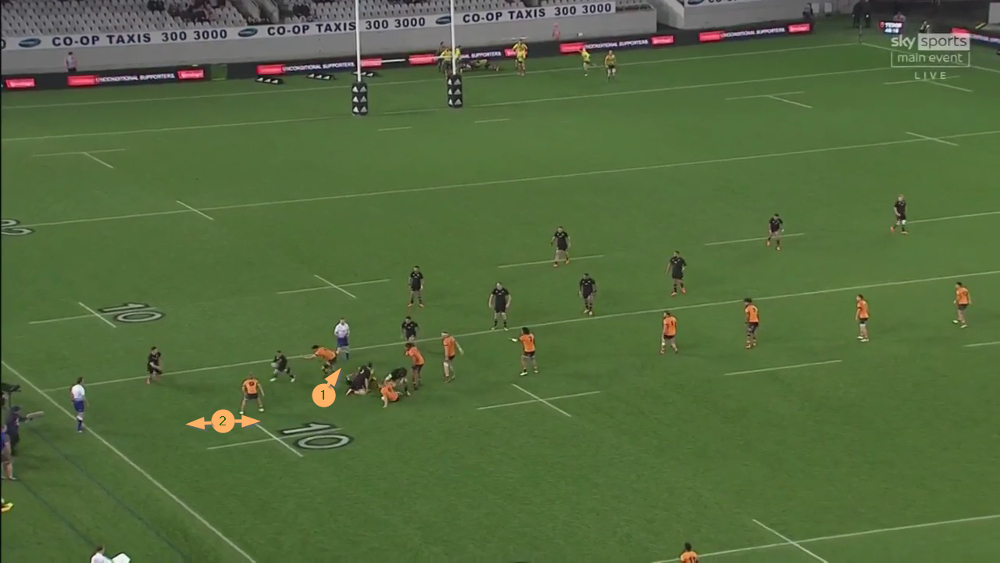 In the second instance, it is replacement hooker Jordan Uelese. 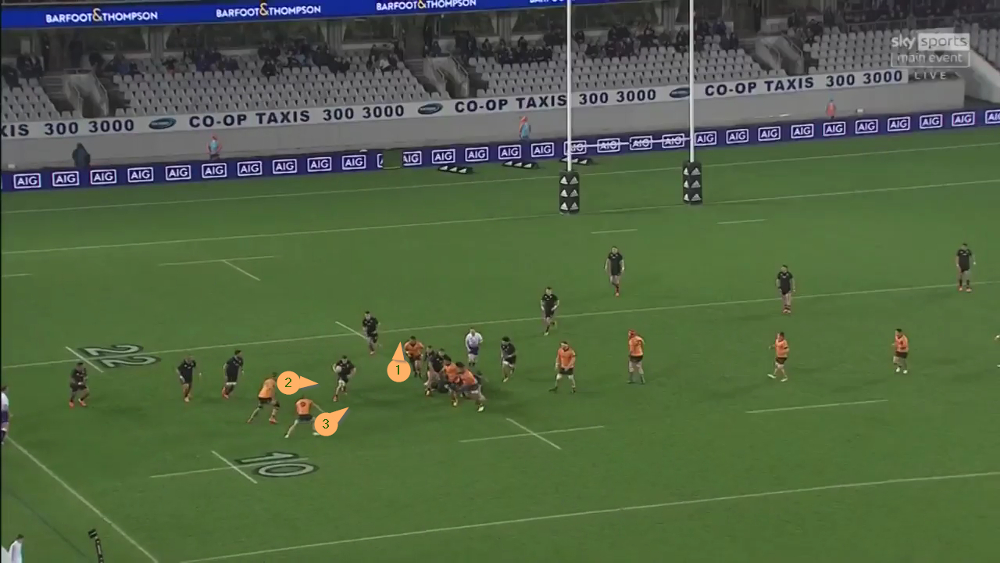 In both cases it leaves the Wallaby short-side defence in a state of complete disorganisation. Once the pillar moves, he must tackle Smith (even at the risk of giving up a penalty) to prevent a far worse fate. The first example was critical: it occurred with the All Blacks down a man on a yellow card, and only up by six on the scoreboard.

There were other examples where the short-side defence seemed oblivious to the sight and smell of danger.

There are three Australian defenders who can influence the play once Smith moves up to the front of the line to tip it off, but Scott Sio, Brandon Paenga-Amosa and Tate McDermott are all looking the other way. 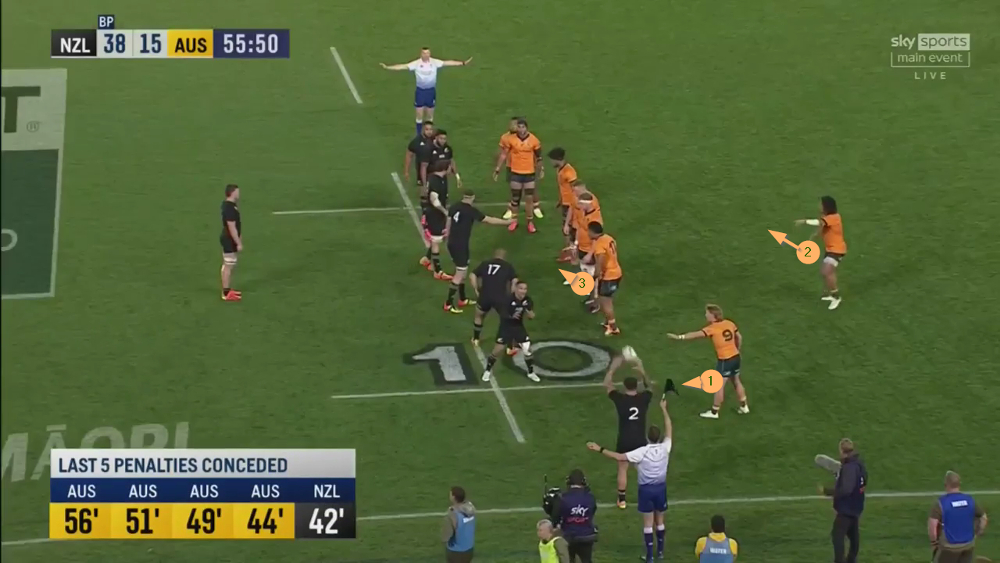 One of the major issues flagged up in my November article was the tendency of the left wing (Marika Koroibete) to follow his opposite number infield from set-pieces in the Australian red zone. 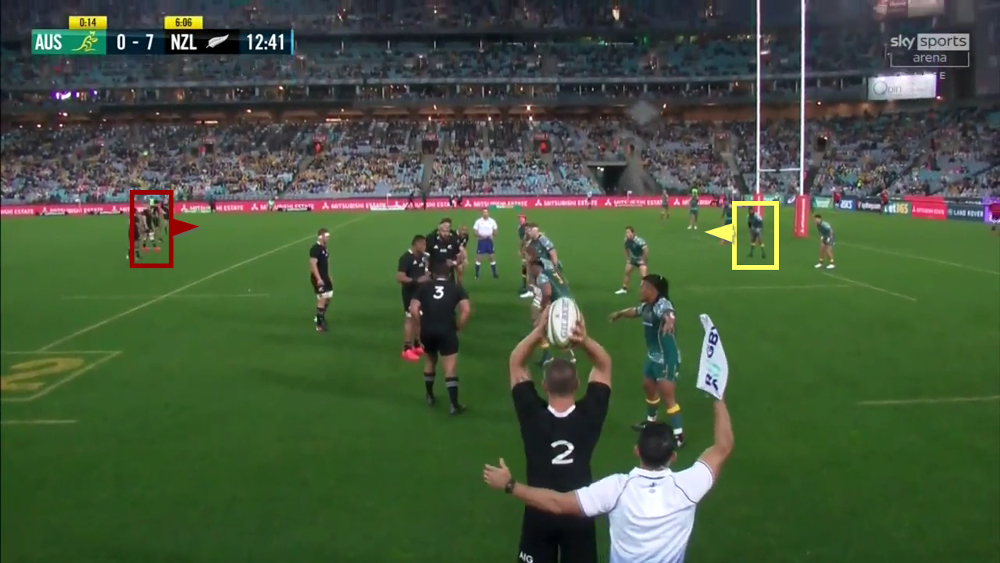 In this instance, Marika just makes it back in time to stop Caleb Clarke in the corner.

On Saturday evening he was not so lucky. At a scrum near the Wallaby goal-line, the initial picture looked like this. 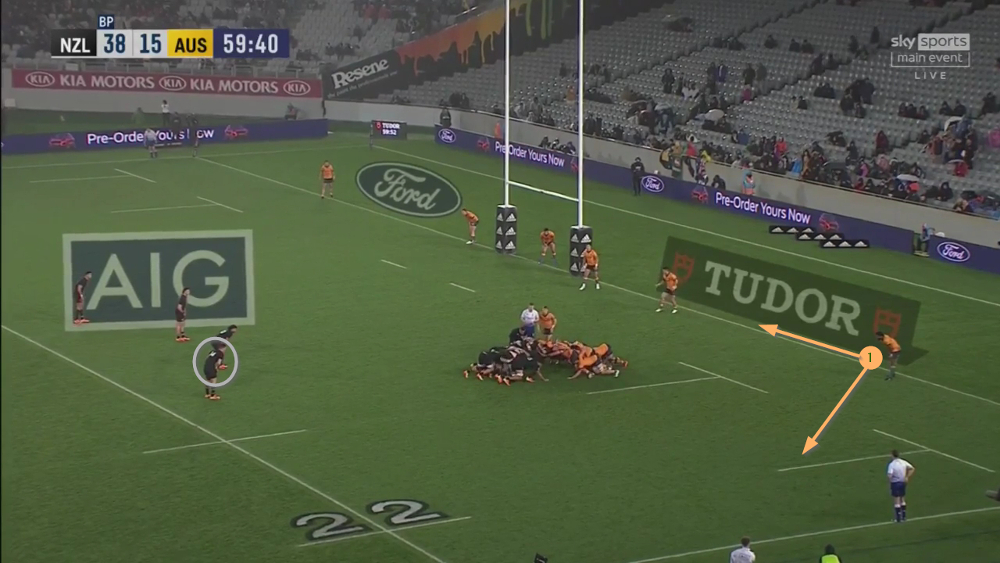 This Coach’s Corner column contained a discussion of just why the blind-side wing must stay on the short side in these situations, even if he is not marking his opposite number directly.

In this instance, the All Blacks catch Koroibete flat-footed behind the first ruck, and shift their right winger Will Jordan back to the short side before he can react. Even if Codie Taylor doesn’t score, Jordan will. 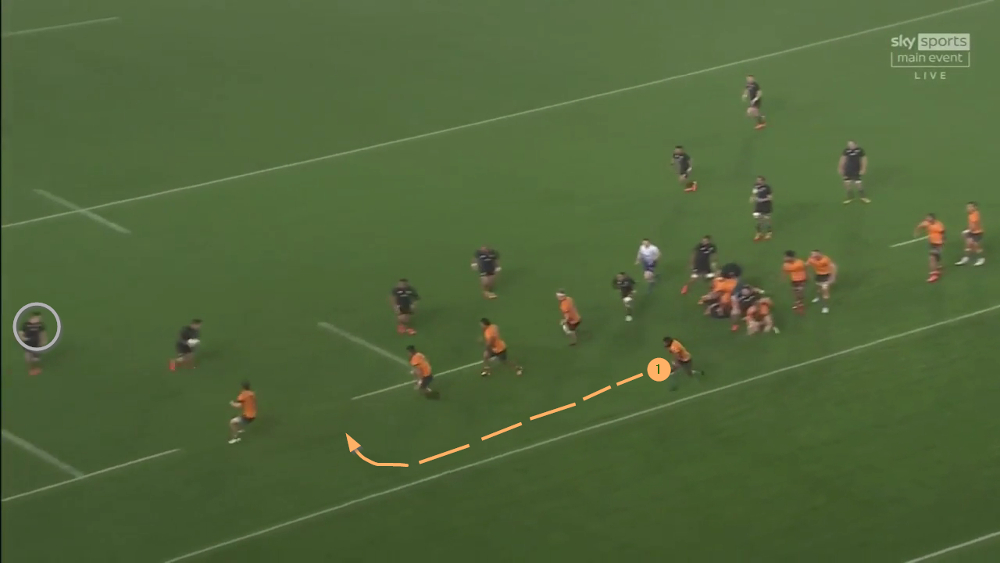 The relaxation of Giteau’s Law cannot come soon enough. While there some aspects of performance which would have pleased Dave Rennie at Eden Park, they would have been heavily outnumbered by the negatives.

Chief among them was Australia’s tendency to lose concentration at the merest glimmer of an opportunity, real or imagined. Long cut-out passes which failed to take account of the positioning of defenders on the edge; impulsively jumping an operator as canny as Aaron Smith at the base; deserting short-side responsibilities to follow the ball infield. ‘All that glitters is not gold’.

Dour and unimaginative though it may have been, the recent series between the Lions and Springboks emphasised the need to maintain discipline and avoid giving the opponent cheap points. The flip side to risk-averse is mistake-free.

At present, the Wallabies are making the same mistakes over and over again, and it is overwhelming the improvements in their game. The same weaknesses are there from one season to the next, and carried over from one game to another.

Until they address weaknesses with the same enthusiasm that they cultivate strengths, the Dave Rennie era will prove to be a pursuit of fool’s gold.