It’s reminiscent of an ex-lover running back into your arms after years apart, and Didier Drogba, Juninho, Kaka and Paul Pogba have felt varying degrees of love from fans upon their returns to previous employers.

Even in the A-League, where players freely move each season, there is that league-wide feel-good story when a star returns.

The diminutive Spanish central midfielder arrived as a little known 27-year-old with a handful of La Liga games to his name in 2013. 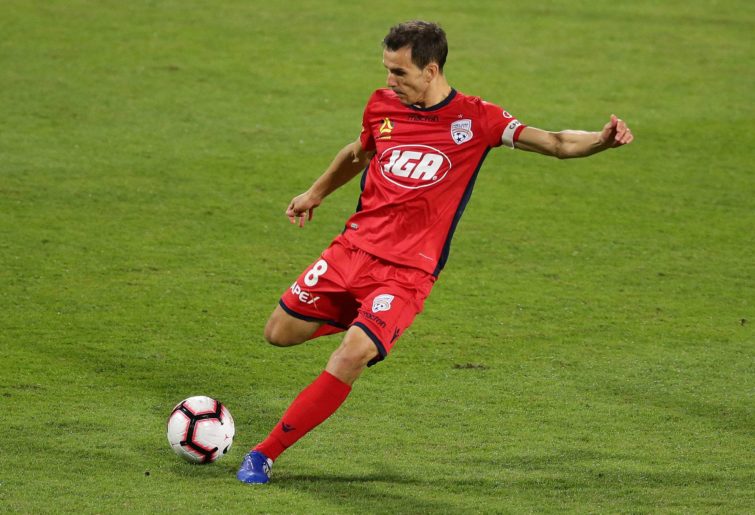 Over the course of the next six seasons Sanchez won two FFA Cups, an A-League premiership and championship double and a Joe Marston Medal in the grand final, and he was a four-time club champion and became captain for the final two years of his stay.

A playmaking Spanish No. 6 or 8, Sanchez quickly established himself as one of the league’s best-ever central midfielders with his passing range, leadership and gamesmanship with the refs and opposition players. There is also his wonderful set-piece ability, with a highlight being his amazing freekick in front of 50,000 fans in the grand final.

Sanchez was happy in Adelaide, but when a lucrative seven-figure offer came in from Qatari side Al-Wakrah in 2019, he made the life-changing decision to move on.

The return of Isaías has reinvigorated a supporter base that has been disillusioned with the club’s lack of transfer activity this off-season.

Adelaide fans have been left frustrated with the unspectacular captures of Nick Ansell, Jacob Tratt and George Blackwood. All three are yet to enter the state due to strict interstate lockdown laws.

United’s budget has been cut to the leanest it’s been for several years, and there is concern it may be the lowest in the whole league this season, a dishonour that normally falls to the Central Coast Mariners and Newcastle, who themselves have gone on recruiting sprees.

Signing a 34-year-old to a three-year contract has raised eyebrows interstate, but this is a player who has never relied on speed and has avoided injuries throughout his career.

Isaías will have a good chance to become Adelaide’s all-time leading appearance holder by the end of his contract, but it’s his mentorship of youth and eventual move into coaching that is the real benefit to the club.

Johnny Yull held the record for youngest ever A-League player at 15 years of age when he debuted early last season. Now a year old and physically bigger in height and muscle, he has been a stand out in the NPL this term scoring several goals.

Two other midfielders from that same NPL team who are likely to break through this season are Ethan Alagich and Bernardo Oliveira, the sons of United and A-League legends Richie Alagich and Cassio Oliveira.

Isaias will be joined by these three kids in a central midfield unit that already consists of Juande, Louis D’Arrigo, Stefan Mauk, Nathan Konstandopoulos, Joe Caletti and pinch-hitting fullbacks Javi Lopez and Josh Cavallo. Adelaide United have arguably the most depth in central midfield in the A-League.

Coach Carl Veart has been tinkering with different player combinations and tactics in training this preseason, but he will have to wait for Isaías, who has to quarantine for 14 days in Sydney and then 14 days in Adelaide.

Once he arrives it would be no surprise to see Isaías deployed as an attacking midfielder, which is a position United has neglected for several seasons, but there is equally as much chance of seeing Isaías drop into an auxiliary centre back role if Adelaide goes to a wing-back formation.

With the matador’s return, will the club be in the finals bullfight?

I’ll leave that answer to the famous fans banner that will be up again at Hindmarsh Stadium home matches: si, senor. Si.