The Wrap: Rinse and repeat as sharply focused All Blacks sweep the Wallabies

For all of the All Blacks’ nineteen-year long dominance over Australia, it is worth pointing out that a clean sweep of matches has only been achieved three times in the last decade.

Before yesterday, the All Blacks had won four of the last eight matches, and just two of the last five in Australia.

Yesterday afternoon’s 38-21 result righted that equation for the All Blacks and it was no surprise to hear coach Ian Foster say afterwards that the main driver for the performance was “the excitement to do something we haven’t done for a while”.

Wherever the questions led, Foster came back to his side’s “desire to play”, and their continued determination to look for opportunities to play both with the ball and without the ball.

While the focus for Australian fans will rightly be on the Wallabies’ uncanny ability to turn the ball over at crucial moments, it shouldn’t be underestimated how much of that came from pressure from the All Blacks, forcing them into small errors, inaccurate offloads and isolation at the breakdown.

It’s a script we’ve seen play out many times in recent history; the Wallabies caught somewhere in the middle between wanting to play rugby, which inherently introduces an element of risk, but doing so in an inconsistent and inexpert way that serves only to feed the beast, providing a team with a deadly appetite for transition play on the turnover, easy pickings. 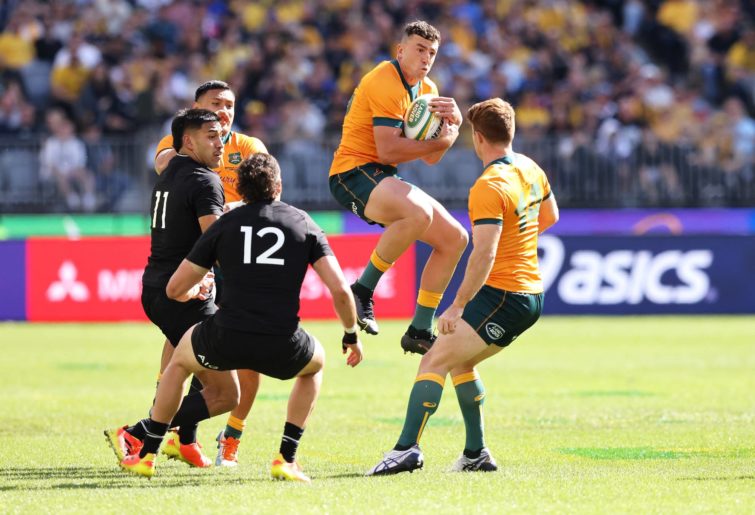 The Wallabies looked to have made a sensational start, but a long range try to Marika Koroibete in the third minute was ruled out due to Samu Kerevi picking the ball out of a ruck from an offside position.

Koroibete would also be denied, just prior to halftime; pinged for multiple movements on the ground prior to forcing the ball over the line. It might have looked harsh to the casual eye, but anyone who has watched much rugby over the last couple of months knows just how hot referees are on this at the moment.

The tone for the match was set in the first quarter, the Wallabies conceding large chunks of territory after pushing the pass or conceding turnover penalties. It was inevitable it would hurt them on the scoreboard, and the try, when it came, was a corker; Beauden Barrett nudging into space for Will Jordan, Brad Weber and Jordie Barrett to sweep onto.

Disappointingly, the Wallabies stubbornly refused to take advantage of opportunities offered to them; Noah Lolesio missing a penalty from in front, and Tom Banks kicking the ball dead, immediately after Jordie Barrett had joined his brother Scott with the dubious honour of being sent from the field in a Perth Test match.

With Codie Taylor down injured, a pinball play fell the way of the Wallabies, but even with a two-man advantage, and players to burn, Lolesio chose the wrong option and the All Blacks were again let off the hook.

Piggy-back penalties followed, and suddenly the All Blacks were down the other end, doing what they so often do, scoring right on halftime, for an 18-0 lead.

Ironically, and typical of a Wallabies side that consistently lacks a clinical edge, the home side finally found the chalk the very minute after the All Blacks were restored to fifteen men. The All Blacks’ close-in defenders had done a good job in the first half not overcommitting to Tate McDermott, however after Darcy Swain stole a lineout, McDermott found space up the middle, for Folau Fainga’a to finish.

If there is one area of concern for the All Blacks arising from the match – apart from Beauden Barrett’s abominable place kicking – it is this. They were caught a few times, too slow to re-form close to the ruck, and while Foster acknowledged the strength of the Wallabies in targeting this area, and some potential mitigation around positional and personnel disruption, he duly recognised that this is an area where the All Blacks need to improve sharply.

That presents a conundrum for Akira Ioane, who impressed again in the close channels during the first half. That’s exactly where All Black fans over the years have liked to see their number six; with his sleeves rolled up and his shoulders smacking hard into the opposition.

Yet it was out wide where Ioane tore the game apart, in the 54th minute, making a mockery of Koroibete, Len Ikitau and Lolesio to put Jordan in for a gift-wrapped try.

He would repeat the effort in the 68th minute, this time for Anton Leinert-Brown’s benefit. Ioane’s advance has probably been the biggest revelation for the All Blacks so far this year, and it will be fascinating to see just where this takes him against the Pumas and Springboks, in coming weeks.

It wouldn’t be a Wallabies versus All Blacks Test in 2021 without an intercept try, and this week it was Matt Philip who offered the ball up to Havili, who just had the legs to outlast Samu Kerevi on his long run to the line.

By now the All Blacks were playing rope-a-dope rugby, soaking up plenty of phase pressure from the Wallabies, picking their moment to attack the breakdown, or else, waiting for the inevitable Wallabies mistake to come.

Another loose ball fell into the arms of TJ Perenara who, after darting into space into the Wallabies’ half, looked for and found George Bridge with a heads-up kicking play that again highlighted the difference in clinical scoring power between the sides.

There were some little rays of light for the Wallabies; Pete Samu quick to recognise space at the back of the All Blacks’ ruck, darting clear to put White in, and then White himself, doing similar for Tom Banks’ closing try.

Frustratingly, these tries said as much about the Wallabies’ frailties than any of their defensive lapses. While there was recognition that the All Blacks were vulnerable up the middle, there wasn’t the discipline throughout to keep probing, to keep forcing the issue.

Instead, the Wallabies once again got suckered into a shoot-out that, while it was guaranteed to keep the Perth crowd entertained, was a fight they were never going to win.

Coach Dave Rennie also identified after the match that his side not only needed to be better at converting pressure into points, but on the back of that, get back down the other end of the field again, immediately afterwards.

Twice in the second half the Wallabies conceded soon after scoring. In truth, the same failing can be found trawling through my match notes over the last ten years. It’s one of the signs of an immature, developing side, but of course, sides can’t be in development mode forever.

For all of its endeavour and hard work on the training track, it is time for this team to show its fans that it won’t keep making the same mistakes, match after match, and that it understands the requirements of Test rugby.

They’ll need to do so in a hurry. South Africa’s size and defensive efficiency will stress the Wallabies next week, although there’s also a hint that a more structured set-piece type of game won’t actually do the Wallabies any harm.

Much of the discussion post-match centred on Jordie Barrett’s red card, and while there was clear contact made with Marika Koroibete’s head, after Barrett got himself into an awkward position in the air, referee Damon Murphy seemed not to take into account the lack of force involved.

As is applied when ruling on head high contact with an arm or shoulder, force is one of the variables used to determine the sanction. In this instance, Barrett’s action was not a kick – contact was made with the sole of the boot, that was almost stationary – and the All Blacks will almost certainly make a spirited defence of Barrett at the judiciary, on those grounds.

There was no defending Stan comments man Sonny Bill Williams however, who was somehow of the belief that Barrett would be returning to the field after twenty minutes. To his credit, Sonny Bill at least got things right in identifying Akira Ioane as player of the match.

And credit where credit is due too, to Rugby Australia and New Zealand Rugby who, through all of their sniping and misunderstandings of recent weeks, conspired to give us a Sunday afternoon Test, played out in glorious conditions.

It may have been the result of good luck instead of good management, nevertheless, may there be many more daytime Tests to come!