Stick or twist?: Ex-players call for Noah's removal as Wallabies weigh up No.10 options

After three tough losses, former rugby stars are discussing just how much pressure Dave Rennie is under as the Wallabies’ coach weighs up a number of critical selection decisions ahead of this weekend’s Test against the World Champion Springboks.

Perhaps the biggest selection talking point is at No.10 with James O’Connor back in training and Reece Hodge also having his supporters as Rennie has to decide whether or not to keep backing Noah Lolesio.

Lolesio has had the jersey for all six Tests so far this season and despite concerns over his performance and suggestions that Quade Cooper might get an unlikely recall, Rennie made it clear his views on whether he would start the 21 year old in Bledisloe 3 last Sunday, saying “we wanted to back Noah. He’s played a lot of good footy for us.”

But after another difficult game, the calls for replacing Lolesio are intensifying. 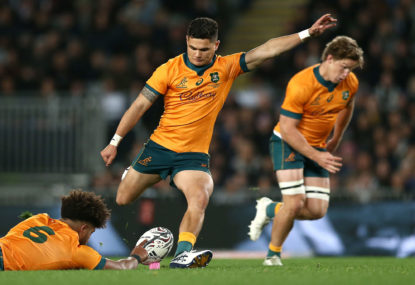 All Blacks’ legendary winger, John Kirwan, feels that giving the youngster a break from starting is a good idea.

“Lolesio, I think maybe Dave Rennie’s got to have a look at him and say, ‘Look, if he’s the future, maybe we need to bring him off the bench with 20 minutes to go,” Kirwan said on The Breakdown on Sky Sport NZ.

“He misses that kick, he does some stuff that I really thought [was] just not really handling the pressure and putting the All Blacks under pressure when they need to.”

O’Connor has been injured and unvailable so far for the six Tests, but he is understood to be nearing a return. The Wallabies could also call on utility back Reece Hodge to fill the role if O’Connor falls short and they want to take Lolesio out of the firing line this week.

“The idea was he’ll be fit for this week, if that runs along that way then you’d assume he would (start),” former Wallaby Morgan Turinui said about O’Connor on Stan Sport’s Rugby Heaven show. 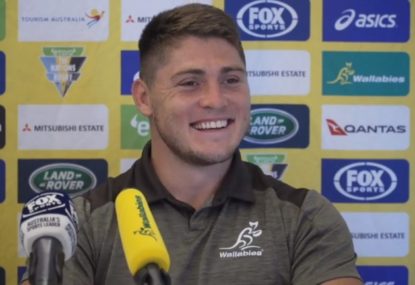 Lolesio still has plenty of support from inside the Wallabies camp though with Dan McKellar wanting to remind everyone that “if you look at all of our good passages of play, Noah’s played a leading role in the majority of them” when the forwards coach was interviewed on Monday.

Hodge fronted the media on Wednesday and said O’Connor would be able to fit back in seamlessly if selected.

“There’s been a pretty consistent style of play we’ve played since the start of the French series where he was at training before he suffered that injury.

“He’s a class player and understands the game well and fitting back into training this week, and if he was to play on Sunday I feel he’d do it easily.

“Being the player he is he’s very much up to the task.”

If selected, Hodge will play his 50th Test on Sunday, but a regular first choice position continued to elude him.

“It’s a question I’m constantly asked and I don’t really know how to answer it these days,” Hodge said.

“Obviously every player wants to be starting and whilst I’m happy to fill that utlity role I want to be pushing for a starting berth, whether that’s at 10, 15, anywhere really, you want to be playing as many minutes as you can for your country.”

McKellar also shared some news that makes Rennie’s situation even more complicated as the World Champions lie in wait. When asked if Wallabies skipper Michael Hooper will have recovered from the impact with Brodie Retallick in time for Sunday, the Brumbies coach wasn’t able to be as positive as fans would have liked, only being able to respond with “Hopefully.”

New Zealand hero Mils Muliaina has also joined the criticism. Muliaina feels any gains the Wallabies made from the French series win have been undone.

“They’ve almost lost the mental game as well. For Dave Rennie, this is probably a huge step backwards. They lack a lot of leadership at the moment,” Muliaina commented this week.

Rennie clearly has a lot to think about and weighing up the importance of a win this Sunday with building a World Cup winning squad for two years time is not an easy equation to balance.