Despite qualifying for September footy on the back of a thoroughly underwhelming 10-14 season, the Gold Coast did themselves proud, almost prising victory from the jaws of defeat, only for a late run down the field to end in heartbreak as Patrick Herbert’s pass failed to find Corey Thompson with the tryline begging on the last play of the game.

And so it was that Sam Walker’s field goal with under three minutes left on the clock made the difference.

This was a finals game of the highest quality and one that threw up no shortage of talking points.

Ten minutes that set the tone
With less than ten minutes having been played, Tyrone Peachey was sent to the sin bin for a professional foul, taking Victor Radley out as the Roosters lock charged through toward the tryline in a potentially try-scoring situation.

In a show of respect for their opponents, or perhaps respect for the fact this was a finals game, the Chooks took the two, rather than press their attacking advantage while they were 12 on 13.

And you just would, wouldn’t you? Get ahead, then use the remaining nine or so minutes to turn two into six and hopefully eight.

But by the time Peachey returned to the field, the Titans had not only kept their opponents to only two on the scoreboard, they had in fact matched that with a penalty goal of their own for an admittedly questionable escort call on Josh Morris.

They may have shipped 583 points over the course of the season – the worst of any side to play knock-out footy in 2021 – but the Titans showed in that critical period that they were not to be taken lightly.

Justin Holbrook’s side were here to play.

Tedesco remains the best fullback in the NRL
Take nothing away from the season Tom Trbojevic has had, it’s been sensational, but…

"You know my brother once told me? That nothing someone says before the word but really counts." – Benjen Stark #gameofthrones

It’s a whole lot easier to win games when you’ve got a full, healthy squad.

Meanwhile, James Tedesco had to step up and become not just his team’s outright captain and leader, but their most reliable playmaker, all while also organising their defence – and he kept on scoring freakish tries and just generally terrorising teams as he’s always done.

Look at his stats from this game – 184 running metres, one try, five tackle breaks, one line break, one line-break assist and one try assist.

And those ‘try assist’ stats don’t really tell the story of Teddy’s attacking importance, the custodian having thrown the second-last pass – meaning NRL.com don’t count it as an assist – in his team’s other two tries that were scored, to say nothing of the flick pass he made for Matt Ikuvalu’s disallowed try.

Meanwhile, in defence, he was as solid as he’s ever been. A particular highlight was seeing him clean up a dangerous attacking grubber on his own tryline in the 45th minute, causing Cam Smith to remark in commentary, “That’s a captain’s play!”

It was a captain’s knock.

Credit has deservedly gone to Trent Robinson for his feats as the coach of a busted side and he’s got to be up there with Craig Bellamy as coach of the year, but Robbo had a lot of help thanks to his recently deputised on-field skipper, Teddy, emerging as one of the best captains in the comp. 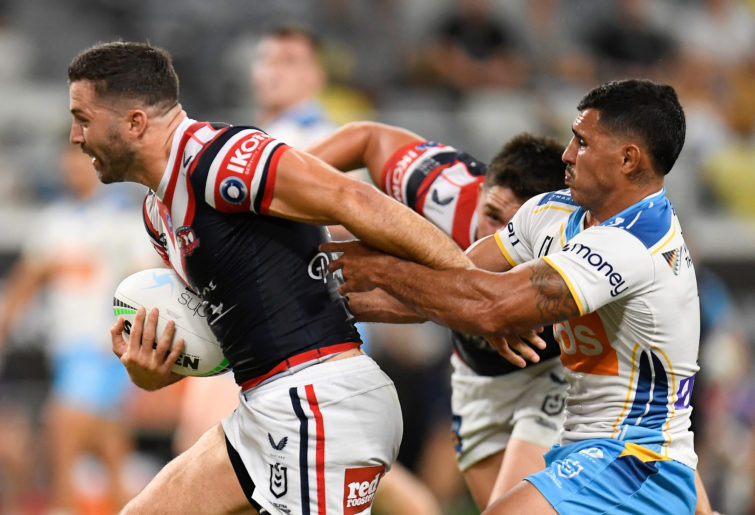 And while he hasn’t scored or set up as many tries as Tommy Turbo over the course of 2021, Tedesco’s has been a more mature and, dare I say, more consistent season.

Skipper of his victorious state side as well, Tedesco kept the NSW No.1 jersey ahead of a red-hot Turbo in 2021 for a reason – he’s still the best all-round fullback in the National Rugby League.

How do the Roosters keep coming?
As long as we’re talking about Teddy’s leadership and all-round brilliance, it bares remembering how horrendous this season has been for the Chooks from an injury perspective.

Trent Robinson would have always expected his side to be playing finals footy in 2021, but he would have also anticipated that come September, he’d be able to select Boyd Cordner, Jake Friend, Brett Morris, Luke Keary, Joseph Manu, Billy Smith, Joseph Suaalii, Lindsay Collins and Nat Butcher – and if he lost a few players he’d at least have back-ups such as, say, Dale Copley to bolster his squad.

But no, none of those ten – ten! – aforementioned blokes were an option for tonight’s game, with some outlets estimating it accounts for more than 60 per cent of their salary cap.

Yet the 40 per cent remaining were, if not clinical, professional enough to do the job that was required of them.

How much should you expect from your million-dollar man?
David Fifita looked to have scored a critical try in the first half, only for it to have been called an obstruction.

So, instead, we’re again talking about a fella on more than $1 million a year who started from the bench.

Now, we saw tonight that a guy who rides the pine can still win you the match, as the Roosters’ No.14, Sam Walker, slotted the field goal that proved the difference.

But Walker ain’t getting paid a seven-figure sum (yet).

You’ve got to wonder what Holbrook plans for Fifita in 2022 because, with Ash Taylor either having departed or staying on a seriously reduced contract, big David is far and away their best-paid player.

And yet, in the biggest game of their season, all they got out of him was 80 metres from nine runs.

I don’t believe he’s taken the big contract and is now just coasting – with less than two minutes to go before halftime, he was roaring at his teammates to hurry up and pack into the scrum so that the ref would call time off, allowing the Titans more time to improve their position of 12-2 before the break (which they did in the ensuing set).

Those are the kind of moments that don’t show up in the stats.

But when you’re on one of the biggest contracts not just at your club but in the entire comp, you need to step up and prove you’re worth it. If you’re a back-rower, that might mean taking tough carries when you’re near your tryline, instead of just charging for glory at the opposition’s white line.

Perhaps his coach isn’t challenging him to be the player his contract demands him to be? Starting him from the bench suggests as much.

Regardless, my maths suggests that 63 minutes plus nine runs plus 80 metres gained plus 23 tackles does not equal a million dollars a year – especially if you subtract three missed tackles!

Who wins the battle of the birds?
We have our first semi-final determined, with the Sea Eagles set to face the Roosters next week, in a re-match of the 2013 grand final.

A week ago, you’d say that Manly were morals to pull Easts apart, so high were Des’ men flying compared to their busted foes from south of the Harbour Bridge.

After the past 24 hours? Geez I dunno.

There have been a few suggestions that Manly were simply flat-track bullies this season, with the evidence being that of their fellow top seven (yes seven, they didn’t beat the Knights in 2021 either) sides, they have only got the chocolates against the Eels.

And while the Roosters’ injury count suggests they are just barely holding on, they continue to win.

I’ll wait until we get the full injury assessment and judiciary report – then probably continue to pull splinters out of my bum.

We’re in for a hell of a game either way though.

“Catches on the inside of the lead runner”
A final point and it’s just a bugbear of mine.

In both instances (both scored in the same corner, not that it means anything) the try was disallowed because an attacking player caught the ball inside of a decoy runner.

And in both instances, you’d be hard pressed to say that the man who scored the try would have been stopped by the defence – such was the line they were up against – and the commentators moaned that the no-try rulings were nit-picking (especially for Fifita’s try).

And while it may seem illogical, at least the obstruction rule is consistent – as evidenced by both teams losing tries from it.

Catch the ball inside the decoy runner’s shoulder, it’s an obstruction. They’re the rules of the game.