In breaking news, administrators at Cbus Super Stadium have confirmed that new, ground-breaking, in-game entertainment will be trialled for the first time this weekend in the final double header of the Rugby Championship.

In response to a dour 100th Test match in Townsville, organisers have liaised with Rugby Australia, SANZAAR and the Australian music industry to try and increase crowd participation in anticipation of another potentially tight game to wrap up the southern hemisphere Test window.

Due to the furore that erupted in rugby circles this week debating the merits of ‘good old fashioned Test match rugby’ versus ‘good old fashioned running rugby’, inside sources advise that during any break in play, and while waiting for conversions and penalty kicks, new musical accompaniments will be played throughout the stadium.

In what will be a world’s first, ‘Sweet Caroline’ has been benched in favour of a more modern and game specific selection.

The Springboks will run out to the Thin Lizzy anthem that has also been reworked into ‘The Boks are back in town… the box is back in town’.

The All Blacks in turn will enter the stadium to ‘Run Baby Run’ by Sheryl Crow.

Classics such as ‘Kick’ by INXS, ‘Time After Time’ by Cyndi Lauper, and ‘Can’t Kick the Habit’ by the Spin Doctors will be utilised while ‘The Longest Time’ by Billy Joel has been chosen for injury breaks, rest or drinks breaks, and any TMO reviews.

Daryl Braithwaite has reprised his iconic ‘Horses’ into a heart-felt Springboks tribute:

“That’s the way it’s gonna be little All Blacks,
We’re relying on our forwards, yeah,
Away up in sky little Faffy,
And if you drop we’ll pick it up – pick it up”

In a new in-game innovation, whenever Faf de Klerk plants his left boot back with toes facing skyward, all big screens in the stadium will be filled with a giant 3-2-1 countdown and crowd encouraged to cry out in unison and then cheer when he sends the ball flying. 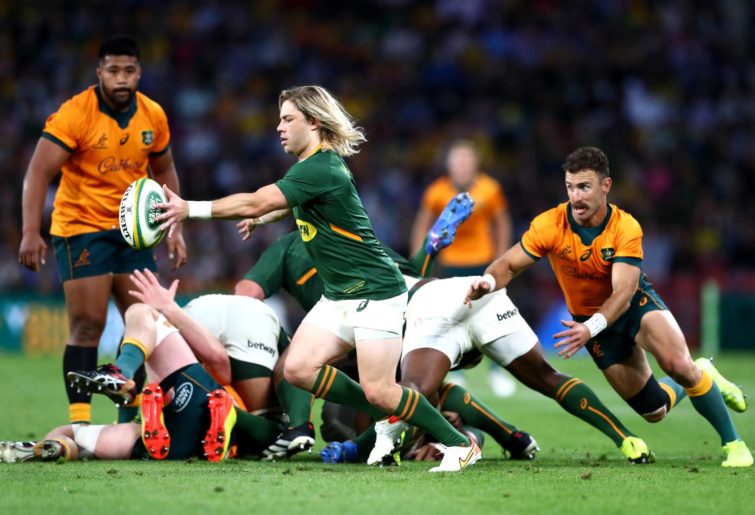 The screens will then prompt the crowd to chant ‘Whhhoooooooooaaaaa…’ while the ball is in the air and cry ‘Bingo!’ in Afrikaans when it is caught or ‘Ohhhhhhhh!’ in Afrikaans if it is dropped.

Patrons will be encouraged to cry ‘Ole!’ in Maori every time actually de Klerk passes the ball, and also every time a scrum collapses or needs to be reset. Some sources say there is a push for an ‘Ole!’ for any and all Springboks passes, though this has yet to be confirmed.

Whenever a player goes down for an injury, drinks break, or to untie and retie their bootlaces, the big screens will be filled with a giant stopwatch, with the words ‘Tick tock’ in Spanish flashing until play resumes – with the crowd encouraged to sing along in any language they choose.

With plenty of room for other tracks, Cbus and The Roar have collaborated to call for other songs that can be included in the soundtrack album that will be available after the game and online as a tribute the occasion.

All proceeds from sales will go equally to counselling services for South Africa’s outside backs, the George Bridge Foundation for treatment of fear under the high ball, the Quade Cooper Make-a-Wish Foundation, and the compensation fund that SANZAAR has created to apologise for leaving Argentina out of the Rugby Championship photo.

Please leave all suggestions for appropriate songs below.