If ever you wanted to make a rugby movie about an All Black, Zinzan “Zinny” Brooke’s name would be at the forefront of candidates.

His life, achievements and downfalls would make an ideal script. I have written about numerous All Blacks so far, but the most intriguing personality until now is Zinzan Brooke.

Everything he has done has an element of flamboyance and uniqueness about it, including his name change, risk taking, “that drop goal,” skill set and life since rugby. What would be the name of the movie? Maybe “Definitely not a Murray”?

No offence to the Murrays out there, but Zinzan ain’t one of them!

Zinzan’s original name was Murray Zinzan Brooke, but he changed it by deed poll to Zinzan Valentine Brooke. I am not sure at what age he did this, but it was quite a rare thing to do and quite an uncommon name to produce.

I remember the first time hearing the name and being intrigued. The Guardian in 1999 summed it up as to the origins, “Cricketer Chris Harris has the second name Zinzan. He shares it with a brother and late father. It comes from one Zingario, who travelled from Italy in the sixteenth century, becoming an equerry in the court of Henry V111 and changed his name to Zinzan”.

You can imagine a movie would start with a young rural boy in Northland New Zealand playing rugby on their farm with his two brothers Marty and Robin. His father telling him old and embellished stories of legendary All Blacks including Peter “Tiger” Jones.

When Zinny was only twelve he met Super Sid Going and was quite surprised at how short he was. Many of us will have stories of our first encounters as youngsters when meeting current or past All Blacks, I met a lock whose name escapes me and thought what a giant of a man! 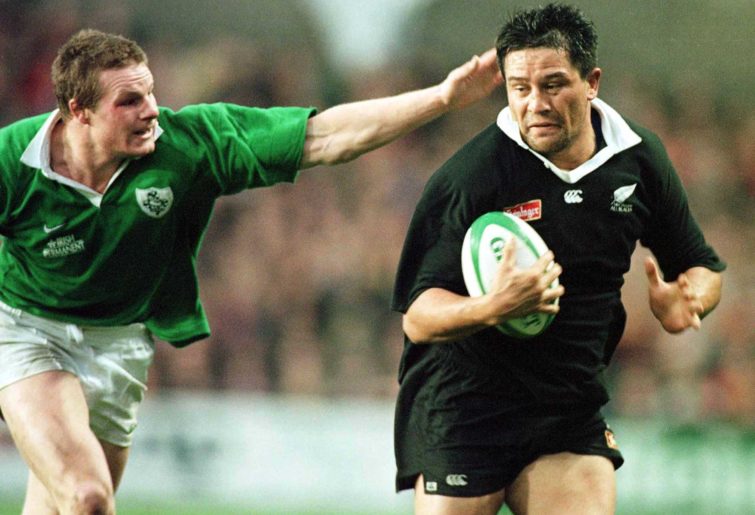 You can imagine the young Zinzan trying out all the skills needed to become an All Black down on the farm. Punting, tackling, drop kicks, sidesteps, and running with the ball would have all featured. All the stuff we saw our heroes do. The origins of some of his famous moments began on the farm. The stage just got a bit bigger!

Although as a teenager Zinny was mainly concerned with working on the farm as a shearer, thoughts of being an All Black were put to one side.

Fame was only a few years away; however, he was chosen for the New Zealand Under 17s as a prop and this was the inspiration to make him believe an All Black jersey was possible. His development included selection for Under 18s and being noticed in the New Zealand Colts team.

A huge step was taken when he stamped his presence on the New Zealand Sevens Team in 1987. Influential people were impressed with his athletic build of a forward and pizzazz of a flashy back.

Zinzan Brooke was named in the 1987 World Cup squad after Mike Brewer declared his unavailability due to injury. At the age of 22 years, Zinny made his debut for the All Blacks against Argentina in a pool game and scored the first of his 41 tries.

Being the only Maori in the side, Brooke had to lead the haka and, in his words, “it scared the crap out of him!” One thing Wayne Shelford did was to instil greater passion into the haka, compared to the feeble efforts of previous years.

The All Blacks were extremely fortunate to have both Wayne “Buck” Shelford and Brooke in the squad, but it meant Zinny didn’t get to play in the “big ones.”

Shelford was like Sean Fitzpatrick in that he kept exceptionally talented players out of the first string side. Zinzan however did go on the tour of Japan in 1987 and Australia in 1988.

Brooke’s appearances were irregular being Shelford’s backup at No. 8 and he did not play another Test until 1989 against Argentina in Wellington. Due to injuries and selectors whims, he did not cement his role in the team until later in his career after Shelford was dropped in 1990.

This dropping prompted great despair in New Zealand and the “Bring Back Buck” signs became prominent around New Zealand. Zinny was considering an offer to play rugby league in Australia but was told by those aware that he would soon take over from Shelford.

People could not understand why Shelford was dumped, and some questioned whether it was to make Brooke the first choice. After playing No. 8 and both flanker positions the permanent role was now Brooke’s.

It was at the 1995 Rugby World Cup in South Africa that Zinzan Brooke really became a folk hero to many. Yes, that drop goal.

Name another forward who would have the skills and cognitive ability to think, “I might just have a crack at this”! One of the great Rugby World Cup moments of all time.

Zinzan fielded the ball on the bounce on his side of the half-way, with momentum he launched into the kick 48 metres from the goal posts. Keith Quinn’s commentary best sums it up, “Zinzan Brooke trying a drop kick from a million miles out, WHAT A GOAL!” Yes, it was quite extraordinary, all those years practising on the farm paid out.

Zinny is a notorious risk taker, and the drop goal was a prime example. His response was that “I thought: ‘How can I upstage Jonah?’ I knew I could do it, so I just did. I knew it was going straight through the sticks. Jonah scored four tries, but everyone remembers the drop goal.”

Essential Surrey. And it was not a one off drop goal as well, he landed two others in international rugby.

Everyone knows about the World Cup result, but it is interesting to read Zinny’s perspective, “As for what happened next, what can I say? We all felt we had plenty left to give in the final, but something was definitely done to us. Forty-eight hours before the big day and 18 of us, plus management, go down with food poisoning. That may be coincidence, but I do not think so.”

“For every game before then we had made a point of eating in public restaurants to avoid being targeted. But in the week of the final we isolated ourselves in a private room. We had asked for our chef [a New Zealander] in Cape Town to be brought down to cook for us in Johannesburg, but the hotel management point blank refused. When we realised what had happened, we thought about pulling out, getting the game postponed. However, we decided to use it to motivate us even more. Unfortunately, things did not work out as we had hoped.”
The Guardian 2003

As well as his drop-goal kicking ability, Zinny was also a master try scorer. His 17 tries in Tests was a record for a forward and at one stage had scored eight tries in seven games. Many of his first class tries were scored from the back of the scrum with pushover tries, but he also scored from broken play.

One against South Africa was memorable for the audacity of it, a quick tap for a penalty then a surge for the line. He had brilliant control at the back of the pack and there was little the opposition could do to prevent a try. The All Blacks scored several tries from a scissors move that involved three players including Brooke, who often crossed the line unopposed because the opposition could not work out who had the ball.

Zinzan also played for Auckland from 1986 to 1997 and became captain of the provincial team after Sean Fitzpatrick was made captain of the All Blacks. He captained the Auckland Blues to Super 12 glory in 1996 and 97. He is remembered for an incident involving referee Paddy O’Brien when Brooke disagreed with the refs call for a penalty. Referees love to blow penalties that win matches.

Zinzan Brooke ended up playing 58 Tests and 42 non internationals for the All Blacks. His final Test was against England in 1997 aged 32 years. He had five matches as All Blacks captain. In 1997 he was appointed a Member of the New Zealand Order of Merit for services to rugby.

In 2007 Will Carling ranked Brooke ninth greatest player of all time, “For a forward his skills were outrageous, and he was as comfortable playing sevens and 15s. He had better kicking and handling skills than some fly-halves playing international rugby. You align that with his strength and ability as a forward to read the game-he was unique.” John Hart said, “there would never be another player like him.”

After he retired Zinzan moved to England and was player/coach for the Harlequins Club. He also enjoyed playing for the Coventry and Windsor Clubs.

In Windsor he ran Frances Lodge with his wife but fell into financial problems when his bank restructured and called for 1.1 million pounds. They have been dealing with the problem since and look forward to other opportunities. Their son Lucas has recently signed a two year deal with London Irish in 2020 and his ambition lies with playing for England.

In another incident Zinny fell out of a taxi in Elche, Spain in 2007 and needed surgery to ease pressure due to a blood clot on his brain. A positive was to have a beer named after him, “Zinzan’s World Cup Drop.” A greyhound has even been named after him.

A good quote from him was his reply to being asked, what is your most painful recollection of life at the top in rugby, he replied,” corporate hospitality!” The greatest player he played with was Michael Jones and against was Richard Hill and the late Ruben Kruger.

Zinzan “Zinny” Brooke is a genuine rugby hero and was named by Sky Sport and the New Zealand public as the greatest ever No.8 in All Black history. He was a man of contrasts from brutal aggression to gifted flamboyance.

A risk taker who was not afraid to practise what he had learnt on the farm paddock to performing it on the big stage. He did not inhibit himself by sticking to rigid player roles and enjoyed extending himself.

His life story would have made a great movie, rural boy becomes a rugby hero.

Zinzan Brooke, another rugby favourite of mine.