West Ham have moved up to a heady third in the Premier League, overtaking Liverpool after inflicting the first defeat of the season on the Merseyside club.

Liverpool last lost against Real Madrid in the Champions League in April with their last Premier League defeat back in February, but they were second best on a noisy afternoon at the London Stadium which left Hammers fans in raptures.

Goalkeeper Alisson Becker could be faulted for all three goals in West Ham’s 3-2 win.

The Brazilian misjudged a Pablo Fornals corner in the fourth minute, diverting it in, failed to stop Fornals’ weak shot early in the second half, and looked at sea when Kurt Zouma headed in Jarrod Bowen’s 74th-minute corner.

Trent Alexander-Arnold had levelled for 1-1 with a superb free-kick but though Divock Origi scored late on to pull the score back to 2-3 Liverpool couldn’t find another equaliser to extend their 25-match unbeaten run.

However manager Jurgen Klopp felt Liverpool were on the wrong end of two key decisions as they missed out on a slice of history.

Liverpool arrived knowing that if they avoided defeat they would extend their unbeaten run to 26 matches, beating the club’s all-time record set by Bob Paisley’s team in 1982.

Klopp was adamant West Ham’s first goal should not have stood as Angelo Ogbonna had impeded Alisson, and he felt Aaron Cresswell should have been red-carded for a first-half challenge over the top of the ball on Jordan Henderson.

“I think it’s a clear foul on Alisson, how can it not be?” said Klopp.

“Then I saw only the situation with Aaron and Hendo now, and the way I see it is it’s a clear red card. There is no discussion.”

Arsenal moved up to fifth, two points behind, with a narrow 1-0 home victory over Watford. After Pierre-Emerick Aubameyang had a first-half penalty saved by veteran goalkeeper Ben Foster, Emile Smith-Rowe struck in the 56th minute.

It was Arsenal’s 100th league goal under Arteta in his 100th league and cup game in charge. “It shows the unity, the courage and the development of the team,” said Arteta. “We have achieved good results in the last two months but there is still a lot to do.”

And who else but the Hale End boy Emile Smith Rowe to score the 100th Premier League goal under Mikel Arteta?

Joshua King missed Watford’s solitary chance in the 86th minute when he hit the side netting from a tight angle.

The visitors had Juraj Kucka sent off shortly afterwards for a second yellow card.

Demarai Gray spurned a good chance for the Merseysiders before Giovani Lo Celso hit a post for Tottenham.

Toffees substitute Mason Holgate was sent off 10 minutes after coming on for a high challenge on Pierre-Emile Hojbjerg but Everton held on.

It was the first league match for new manager Antonio Conte and despite Spurs failing to register a shot on target he said: “Today I have seen the heart of my players, the passion, the will to fight, the will to sacrifice, the will to understand that there was a moment very, very difficult for us and to see this type of reaction makes me more confident for the future.”

Brazilian Raphinha fired Leeds ahead in the 26th minute of a breathless opening half with a vicious low free kick. 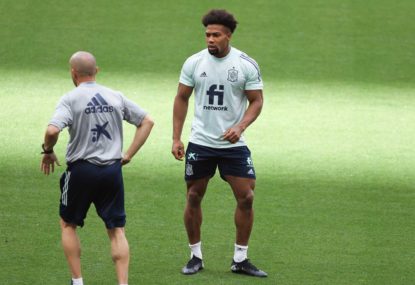