And the champion quick has a warning for under-siege wicketkeeper Tim Paine, who is sure to be bombarded with insults during the Ashes: “It’s going to be very difficult”.

One song, to the tune of My Old Man’s A Dustman by Lonnie Donegan, features the lines: “Tim Paine was your captain/ He had a mobile phone/ Advice came in from Warnie/ Send a picture of your bone”.

Johnson was famously targeted by the Barmy Army, who revelled in chanting: “He bowls to the left, he bowls to the right/ That Mitchell Johnson, his bowling is shite”.

Those words stuck in Johnson’s head and put him off his game.

“It’s going to be very difficult [for Paine],” he said on 2GB radio.

“I’ve spoken to my [wife] Jess about it in the last couple of days and she’s been around it as well: it’s very difficult.

“I don’t know. He [Paine] is pretty confident that he can [play], so I think that’s a good start if you have that confidence.

“But I’ve already seen something on the news come through that the Barmy Army have already got the songs ready and waiting. And they do get to you.

“If I had any advice, it’s just to be really prepared for it, as best you can, and try and block it out. I don’t know how he’ll do that, but we’ll have to wait and see.”

After a blazing start to his Test career, Johnson struggled for consistency on the 2009 Ashes tour and his wayward bowling became the butt of the Barmy Army’s jokes.

“I bowled a bit all over the place. And that’s where the Barmy Army started, ‘Bowls to the left, bowls to the right, Mitchell Johnson your bowling is shite’,” he said.

“The media, the Barmy Army really did get to me. I was singing the song in my head when I was playing — so emotionally it had a massive impact on me, and I just sort of fell apart.”

Of course, Johnson ended up having the last laugh on the Barmy Army and England as he produced one of the great Ashes performances throughout the 2013/14 home summer.

The fearsome left-armer led Australia to a 5-0 whitewash with 37 wickets, rattling England’s batters with his aggressive approach.

The Aussies will be hoping Paine can also shut up his detractors through on-field success.

The former skipper has the backing of his teammates.

A day after opener Marcus Harris sung Paine’s praises as a gloveman and leader, veteran off-spinner Nathan Lyon went into bat for the 36-year-old.

“I think Tim’s made a mistake, he’s owned it and, to me, that shows great courage,” Lyon said.

“Tim’s got my full support, so I’m looking forward to catching up with him as soon as we get out of quarantine [on the Gold Coast].”

Lyon believes it’s a no-brainer that Paine will be picked for the first Test and said his presence wouldn’t be a distraction.

“I think the selectors said they were going to pick the best available XI and in my eyes Tim Paine is the best ‘keeper, so I know that I want him,” he added.

“This is very selfish, but from a bowler’s point of view, I want the best gloveman behind the stumps. And in my eyes, that’s Tim Paine.

“I think every bowler’s relationship with the ‘keeper is exceptional. And I think Tim Paine is a very loveable guy and a well-respected guy in the Australian changeroom.

Still on Lyon, the tweaker harbours no fears that potential Test captain Pat Cummins would have a bias towards his fellow quicks when it comes to deploying the bowling attack.

“I get along with Pat really well and we’ve been playing so much cricket for a long period of time; we understand each other’s games extremely well,” he smiled.

“No doubt there will be conversations about spin bowling, but talking to Pat already at training here, he’s pretty keen to get me the ball as soon as I can.”

If appointed, it won’t be Cummins’ first foray into captaincy after he led New South Wales to a one-day title last year (though he missed the final due to IPL commitments).

Lyon was part of that successful Blues team and is “excited” about the prospect of the paceman becoming Autralia’s first full-time fast-bowling Test skipper.

And he sees former Aussie leader Steve Smith as the ideal deputy.

“Rather than having two batters’ mindsets, you’ve actually got both mindsets that can come together and really come up with some really good guidance,” he added. 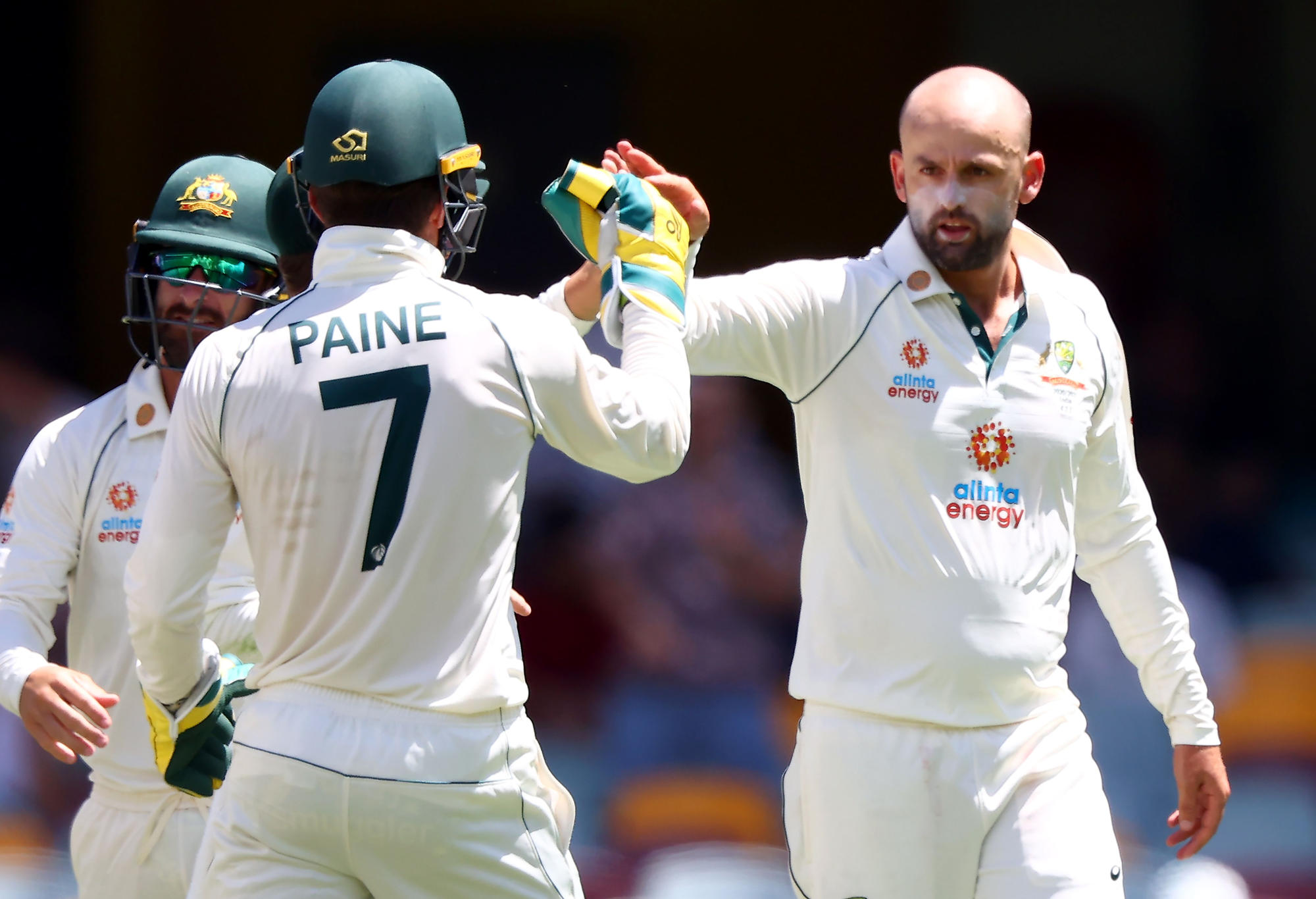 “I’m really excited by the fact that we’re potentially going to have a bowler as a captain. But in saying that, we’ve also got one of the best batters and one of the best players to play the game in Steve there as well.”

“Pat was great, he kept a really relaxed vibe in the change room,” Jaques said, according to AAP.

“He utilised the people around him really, really well, kept the guys really relaxed and really confident.

“He learned on the run a bit – he hasn’t done a lot of it over the course of his cricketing life but he is a natural leader.

“He did a fantastic job. I think there’s some really good options across the board in Australian cricket … hopefully it’s one of our own.”

While Lyon focused on the positives in Cummins and Smith teaming up, former captain Michael Clarke said the latter must not overstep his responsibilities.

“He’s got to be careful, Smithy, because he copped some criticism for doing that when Tim Paine took over the captaincy as well,” Clarke said on The Big Sports Breakfast.

“That he was standing at slip waving his hands, moving the field. If he is vice-captain or even if he is not, he has got to be very careful. There can only be one captain on the field.

“That is what leadership is about as well, owning that. If it is Pat Cummins, he can take advice and guidance but then it’s up to him to be making the decisions.”

A return to a formal position of power will undoubtedly bring more scrutiny to Smith.

“I don’t think Steve Smith understands how extreme it is going to be,” Clarke said.

“He got a tiny glimpse of it last summer against India when he scuffed the pitch and was called the biggest cheat on the planet. I don’t think he understands how heavy it is going to be on him.

“Since he’s come back, he’s helped this team win so many games of cricket. He has played a leadership role in the team and is doing a brilliant job.

“I think he can help the team more by supporting if it is Pat Cummins, scoring a truckload of runs and helping Australia win games.”

Vaughan has been accused of making racist remarks to former Yorkshire spinner Azeem Rafiq and two other players of Asian origin prior to a 2009 match.

Although he has vehemently denied the claims, the BBC said it was not “appropriate” for Vaughan to commentate on the Ashes.

“While he is involved in a significant story in cricket, for editorial reasons we do not believe that it would be appropriate for Vaughan to have a role in our Ashes team or wider coverage of the sport at the moment,” read a BBC statement.

“We require our contributors to talk about relevant topics and his involvement in the Yorkshire story represents a conflict of interest.”

However, Vaughan will remain part of Fox Cricket’s coverage.

“Very disappointed not to be commentating for TMS [BBC Test Match Special] on the Ashes and will miss working with great colleagues and friends, but looking forward to being behind the mic for @foxcricket in Australia,” Vaughan posted on Instagram.

“The issues facing cricket are bigger than any individual case and I want to be part of the solution, listening, educating myself and helping to make it a more welcoming sport for all.”