Sometimes it’s easier to create a narrative that things are going relatively well than to address the deep routed engrained challenges facing our game. We grab on to any morsel of positivity and blow it out of proportion, all the while distancing ourselves further from reality.

And so we find ourselves in season 17 of the A-League. The echo chamber the game’s administrators have created and those in the footballing media is plain to see.

We were told after what seemed an eternity that the game’s new leadership would spend big. A pre-season marketing campaign like we never had before. Well yes, we got a decent ad, but beyond that, the main news in the lead-up to the latest iteration of the A-League was Perth Glory’s signing of Daniel Sturridge, and Josh Cavallo’s announcement regarding his sexuality.

None of which, of course, has anything to do with a concerted strategy from the top.

But it got better. The game’s administrators and media crowed about how a Roy Morgan poll showed the A-League has over 1 million more supporters than a year ago, with Central Coast recording a significant jump (over 90 per cent).

This echoed the time when Shaun Mielekamp’s boasted a few years back that Central Coast has shown it can match it with the big boys because the whole Usain Bolt circus generated millions of Twitter impressions.

Well, you have online and social media and then you have reality. And the facts on the ground tell a very concerning story with its genesis that stretches back to the formation of the league.

Round 1 of the A-League Men’s season saw an average crowd average of 10,543. Now notwithstanding the fact that Macarthur had to play in Newcastle, this was a disappointing start to the season, especially since it included the Sydney Derby and Perth Glory’s first home game with Sturridge making his debut.

Round 2 saw a disappointing drop in crowd average to just 6,533. Granted, this was dragged down by Wellington’s ‘home away from home’ game, but it cannot hide some abysmal crowds elsewhere.

To put it in context, previous opening rounds of the A-League at its peak had crowd averages around the 20,000 mark. So we have experienced a marked decline.

As for ratings, well, it depends how you look at it. Although TV ratings for the Sydney Derby were the highest for a non-finals match in the last five years, such a boost can be expected when on a major broadcasting network. It was invariably described in the media however as a ‘soft launch’, with the broadcast being met with apathy by most viewers. 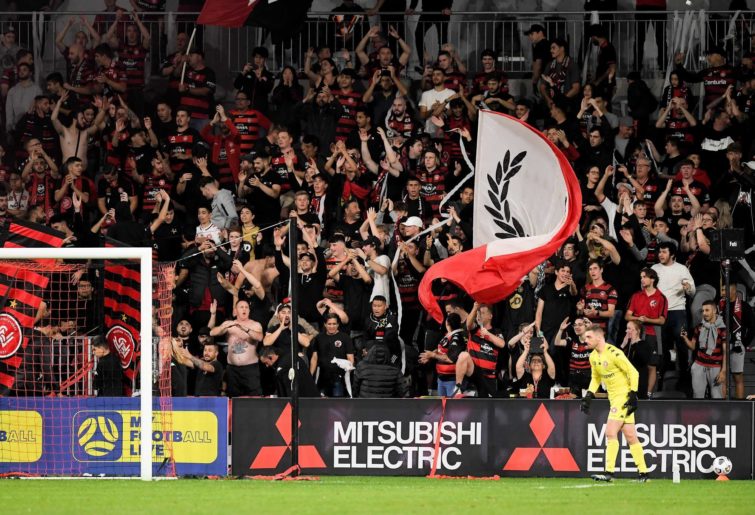 Network Ten would be disappointed with the 146,000 who tuned in nationally as the result significantly dragged down their ratings for the Saturday night. And this was the first round of the season. The blue ribbon derby. Last season, some games drew less than 10,000 people on Foxtel, a sign of how low the game has sunk.

The warning signs have been there for years. People have just chosen to bury their heads in the sand. Administrators with no idea of the game’s real value proposition seem hell-bent on creating a sanitised second-rate version of the Big Bash.

They killed the golden goose when they suffocated active support. They were so detached from reality that they believed active support would scare fans away. Instead, it was drawing fans to the game.

They allowed the game’s football strategy to be dictated by TV and media networks, bringing in soulless franchises with limited support as a cash gab instead of teams from areas who can genuinely help grow the game and where support can be consolidated. Canberra and Wollongong come to mind.

Culpable too is the media. Twenty years ago, Johnny Warren, Les Murray and co. would bring in Soccer Australia officials and drag them over the hot coals. Now, the media seem more intent on ‘protecting the product’ and vibrant discussion desperately needed to drive the game forward has been significantly constrained.

The youth pathways and youth systems have been trashed. We are now seeing the fruits of this. Closing the AIS was a disaster. Throwing the old community clubs on the scrap heap has also had significant ramifications.

In fact, this process of whitewashing our game goes against the grain and has led to many of the issues we have today. Football is diverse, it is vibrant, it is multicultural, it is passionate. If we are honest with ourselves, we know that one of the criteria for exclusion from the A-League was team ethnicity.

This is in fact discrimination and illegal under international law. But it didn’t end there.

Teams were (until recently) forbidden to have ethnic names, ethnic flags were banned. The game’s history was whitewashed and sanitised. This was “new football’s” version of diversity? It claimed to be multicultural on one hand, yet suppressed the diversity of the game that gave rise to the golden generation. In its attempts to be more inclusive than what preceded it, the A-League in fact legislated exclusion. 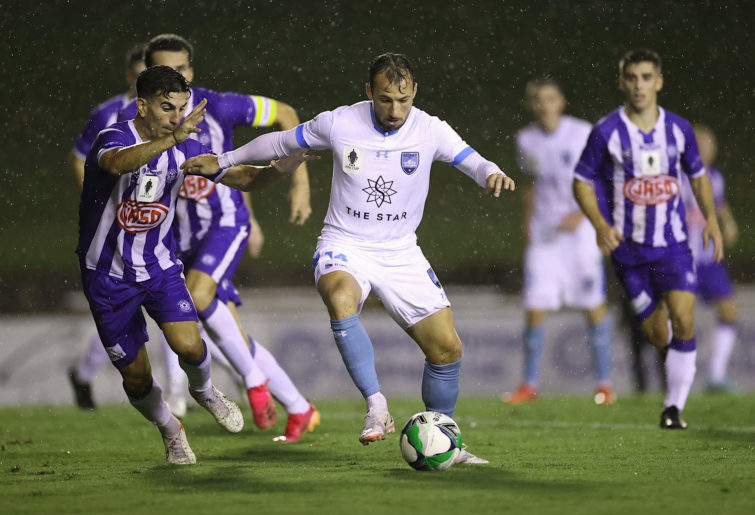 What is more, community clubs had no way of getting back to the top level. Something that goes against football’s democratic principles. The NSL itself had promotion and relegation (though, granted, it left a lot to be desired!).

But we are now in a situation where the A-League often attracts less crowds and ratings than the NSL did at its peak.

Yes, there were challenges with COVID, but the A-League was in decline before the pandemic and as a league that had much more money and many times the media coverage of the old NSL, ratings and crowds below that of said league should never be the case or be acceptable.

We are now at a stage where state league clubs, running on the smell of an oily rag and limited promotion, last season often pulled bigger crowds than some A-League teams. Imagine if they had the exposure. The adage from a small group of fans to those who raised genuine concerns about the game was: “If you don’t like it, don’t watch.”

Well, that’s what fans have been doing. They have walked and this has left the game in turbulent waters. 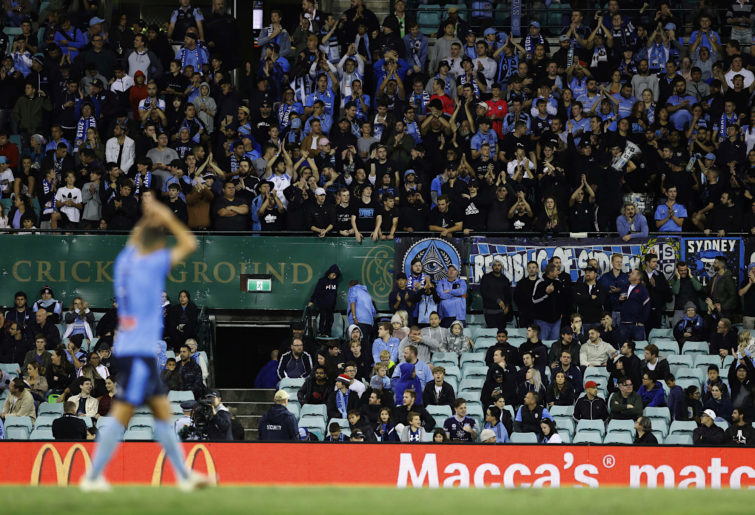 Are A-League crowds cause for concern? (Photo by Mark Metcalfe/Getty Images)

Sponsors have jumped ship, and the new TV deal is worth almost half the Fox deal. The tenuous financial position of many clubs as revenues dry up (and desperate short-term solutions are sought) is a concern. The incompetence, power plays and petty jealousies at the top.

The failure to engage the golden generation into today’s set up or those with genuine football knowledge by those in power because they feel threatened. Problem after problem.

So, where do we go from here?

It is down to us – the fans. Because the game’s administrators will not solve our problems.

The game needs a total fix from the ground up. From re-engaging fans (old and new) to scrapping the current youth development systems. Aligning development more closely with futsal, more emphasis on kids playing in diverse systems, focus on tackling, shooting, defending. This is just a drop in the ocean in the diverse areas of the game that requires improvement.

We need to unite the tribes. Old Soccer and New Football. We need to become one football family. The passion and energy of the new with the tradition, knowledge and culture of the old. We will then be unstoppable.

Football is built on rivalry. From the fans. It isn’t imposed top-down by administrators who treat fans like dollar signs. Some people may not like this idea. But it doesn’t matter. It is what we need to survive, grow and prosper.

You want rivalry. It is there staring you in the face. Community clubs versus new clubs, Old Soccer versus New Football. Unity off the pitch rivalry on it. The stadiums will be bouncing. The RBB raising the roof, the decades-old chant of ‘OOO-LYM-PIC’ echoing through Belmore Stadium. Now we have a competition, excitement and rivalry. Promotion, relegation.

This is our game.

We have entrusted it to corporate types with no understanding the game’s value proposition or the fans and what makes them tick. We need to reclaim our game. And bring back the passion.

And football lost its soul.