I tried to find one word that would describe Carlos James Spencer and initially thought ‘maestro’, then ‘magician’, but settled on ‘conjuror’: a person who practices magic for people’s entertainment.

Spencer was an entertainer with a huge bag of tricks to call upon when needed. He is the most talented footballer to pull on the black jersey, if not in the rugby playing world. Sure, he made mistakes and did not control a game the way his great rival, Andrew Mehrtens could, but for sheer talent alone he was the best.

I watched video highlights of him playing and made note of what outrageous skills he brought to the game. The list is long so I will just mention a selection: the pass between the legs, double pump passes, knee kicks, reverse and behind-the-back passes and, of course, the banana kick.

As well as his bag of tricks, Carlos also possessed great speed, a sidestep and fantastic support play, resulting in many tries. He scored one hundred tries in New Zealand first class rugby.

The magnificent try he scored for Auckland against the Crusaders typified everything about him, the risky pass on his own goal-line, his brilliant support play and finally he finishes off the move with his pace. He then nonchalantly walks to the corner flag to eat up time before touching down.

He converted his own try and followed it up by flipping the bird to the Crusaders fans! All of Carlos Spencer in one try.

It may be true for some players that they are just too talented and have too many options at their disposal. Carlos was one who was so flamboyant and multi-talented that he divided the fan-base and rugby hierarchy.

Wynne Gray, rugby writer, described his talent as “brash” and there would be many Crusaders supporters who thought of him as cocky or arrogant. On the field he was confident and not afraid to test his skills on the biggest stage. His between-the-legs pass to Joe Rokocoko against South Africa is a classic example.

Spencer’s talent was a gift inherited at a youthful age and at 16 years old, while he was still at Waiopehu College in Levin, he was selected for representative rugby in the 1992 NPC third division. A natural sportsman who excelled at BMX and softball before being identified as a precocious rugby talent, he also played for New Zealand Secondary Schools in 1992.

“He was amazing at everything he tried,” said a mate at school.

Carlos Spencer was born in Levin in 1975 and went to Taitoko Primary School and Waiopehu College. At the age of 17 he came to prominence by playing brilliantly for Horowhenua Kapiti against the Auckland side in a Ranfurly Shield challenge. Although his team were thrashed, Spencer scored a wonderful solo try and had the goal kicking duties.

He obviously impressed Auckland coach Graham Henry, as he made the move to Auckland soon after. Being a country kid, it took him a while to adapt to the big city life. In 1994 Spencer played for the New Zealand Colts and in 1995 made the New Zealand Under-21 side. 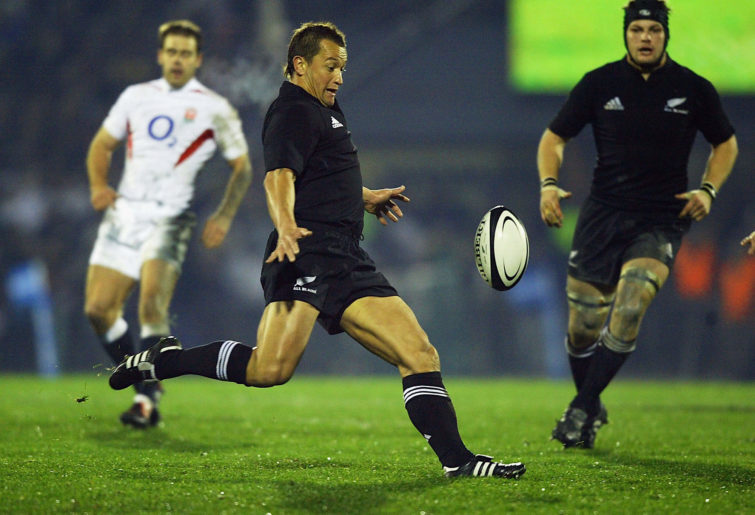 And guess from whom his main opposition for a spot came? Yes, Andrew Mehrtens.

Carlos made his All Black debut on the tour to France and Italy in 1995 at the age of 20. His Test debut was against Argentina in Wellington in 1997 and with ten conversions, two tries and a penalty goal for a haul of 33 points, it can be declared a successful one!

Due to Mehrtens being the preferred flyhalf or first five, Spencer made sporadic appearances for the All Blacks up to 2003. After an outstanding season with the Blues, he played in all 14 Tests and was selected in the World Cup squad.

The All Blacks were bundled out of yet another World Cup after an upset loss to Australia where Spencer is remembered for throwing the pass intercepted by Stirling Mortlock, although despite this, he still had a good game.

Injuries and Mehrtens meant he struggled for game time through 2004 and 2005. A certain player by the name of Dan Carter was also coming on the scene to make life difficult for both Mehrtens and Spencer.

One of his farewell appearances was for the New Zealand Maori against the British and Irish Lions in 2005 where he set up the winning try. Spencer enjoyed the Maori style of rugby. He also played fullback for them and did so for Auckland and the Blues as well.

In his 35 Tests for the All Blacks, he scored 291 points, including 14 tries. Carlos was often criticised for his goal kicking and kicking in general play, from memory however this may have been exaggerated, possibly by those Crusader fans!

After his time in New Zealand, contracts in both England and South Africa were beckoning, and from 2005 to 2010 he was a rugby nomad.

A playing career soon turned into a coaching career, in South Africa and also Japan, and an assistant role with the Wellington Hurricanes.

An interesting time was when he accepted a contract to be kicking and specialist skills coach for the Eastern Province Kings in South Africa. He was soon promoted to a head coaching role which he was not ready for, and this only lasted for one season. The team had a 1-9 record and internal politics created a difficult culture there.

Carlos returned to New Zealand to accept a coaching role with the Hurricanes and to be with his family. He was told however that he would probably have to end his contract at the end of the season due to COVID constraints. He decided to quit early and left after three matches to spend further time with his family.

He showed his boxing prowess in 2011 when he fought Awen Guttenbeil in the Fight for Life series.

In 2021, Carlos Spencer is taking up a coaching role with the New Orleans Gold team in the United States.

Carlos Spencer was a rare talent who completed a stellar rugby career. Under All Black selection and coaching influence was he allowed to flourish as he did with the New Zealand Maori and the Blues? Under John Hart he was chopped and changed with his nemesis Andrew Mehrtens and this did not provide a stable base. As with Christian Cullen, an immense talent was not fully enhanced, I believe.

Who knows, but maybe Carlos Spencer influenced two other great talents from the other code, Benji Marshall and Shaun Johnson. There was something remarkably similar about their playing styles, a freedom to express themselves. Marcus Smith is also showing a similar freedom for England now.

Will Jordan from the current All Blacks is another to show unique talents, but without the flamboyance of Spencer.

Carlos James Spencer was a shining light in All Black and world rugby and will always be remembered as a player not afraid to execute his unique skills on the big stage.

He will always be a favourite of mine.