The first act of the stage play that is the Ashes has been played out. The slings and arrows of outrageous fortune were best weathered by Pat Cummins’ men, who took arms against the sea of troubles presented by Joe Root’s forces and prevailed handsomely.

That Australia outplayed England in all facets of the game is one fact that cannot be argued against.

What is debatable is whether England tied one of their metaphorical hands behind their backs before the first arrow was fired in anger.

I remarked before play began that for England to have any chance of victory, they had to bowl first. This was from a defensive standpoint as well as an attacking one: it seemed as vital that their fragile batting order avoid the tricky batting conditions on the first morning as it was that their bowlers should take advantage of the grey skies and green wicket.

Root, however, had other ideas.

Stuart Broad had driven Australia’s upper order to distraction, in particular David Warner, in England in 2019. Now, in the most English of conditions that Brisbane could offer, the tourists showed their hand early by saving their tormentor-in-chief for another day.

Root then decided that he would do as Mark Taylor had done in Manchester: bat first and back his batsmen to make it through the tough early skirmishes to make hay when the sun finally shone.

Unlike Taylor, whose more experienced henchmen were both willing and able to carry out their captain’s plan, Root was not to see success.

Root’s opposite number, Cummins, went to bed on Tuesday merely as captain elect. By a minute past 10 on the Wednesday morning, he was a part of history.

Mitchell Starc had been criticised in some quarters, with various pundits speculating that his pace and swing is not as it was when the paceman was at his menacing best. However, Cummins had seen enough to throw his spearhead the new Kookaburra, with which he bowled Rory Burns behind his legs with the first ball of the series. 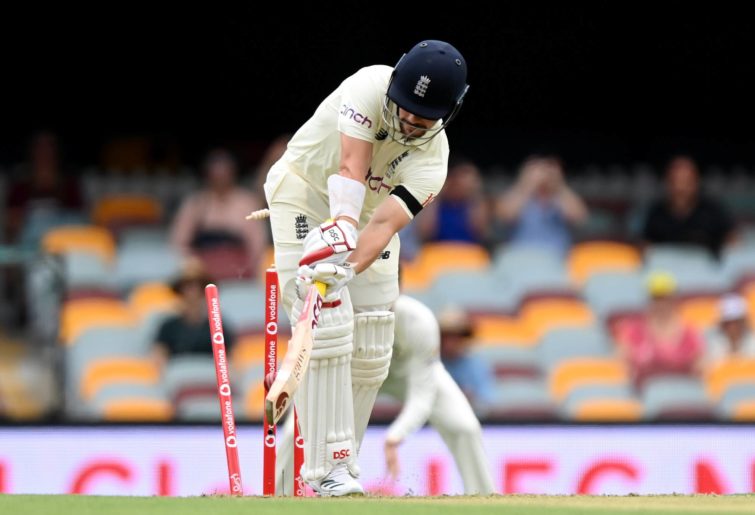 Cummins therefore became only the second Australian captain to see his team claim a wicket with the first ball of his captaincy career. His only predecessor to see a similar success threw the ball to Ernest McCormick, who despatched Thomas Worthington, also against England in Brisbane, in 1936.

I seem to recall that he had a fairly successful captaincy career thereafter. His name was Sir Donald Bradman.

Once Australia seized upon the early favourable conditions by bowling England out for 147, the hosts were always ahead of the game. Where Australia took the chances that were offered to them, England frittered theirs away.

Ben Stokes overstepped the bowling crease when bowling Warner, which would have seen the second wicket fall with the score at 30, but the second ended up coming once Australia were already past England’s total.

Travis Head looked in all manner of trouble early in his innings, but a combination of poor fortune and lack of killer instinct in field settings let him off the chain to the point where he made an imperious 152 at better than a run a ball.

The inability to capitalise on a promising situation was never more evident than on the fourth morning, after the captain and his lieutenant, Dawid Malan, had got England back into the contest. Having got to within 55 runs of parity with only two wickets down, Malan succumbed to give Nathan Lyon his long-awaited 400th Test wicket.

Lyon’s main weapon is the bounce and dip that he generates from a classical high action, rather than any degree of extravagant turn. Because of the overspin he imposes, he often manages to fool the batsman that he is to the pitch of the ball where in reality he is a couple of feet short.

This did for Malan early on the fourth day, a morning on which he never looked as comfortable as he was on the day before.

Once the Malan-Root liaison had been parted, the rest of the batting order folded with alarming speed.

Lyon, as if released from his shackles by passing the historic barrier, proceeded to run through the England side with the pace bowlers in support, and the last eight wickets were lost for the addition of only 74 runs.

Australia lost the wicket of Alex Carey, but otherwise had no trouble in posting the required 20 runs to take the early lead in the series.

The second Test, being a day-night encounter, will prove to be a different challenge, likely to be a relatively low-scoring affair, meaning that any fielding lapses – or poor hours with either ball or bat – will be magnified.

The established bowling partnership of James Anderson and Stuart Broad will be back for England, probably at the expense of Chris Woakes, and spinner Jack Leach, who was monstered by Warner and Head.

Josh Hazlewood is a confirmed non-starter for Australia and Warner is in grave doubt.

The conditions in South Australia should suit the England seam attack and provide the best chance possible for them to get back into the series.

It remains to be seen whether they have the psychological mettle to take advantage.