Those familiar with The Roar’s cricket forum know that former Australian batsman Mark Waugh is a lightning rod.

To some, he underachieved given his prodigious talent. To others, he’s underappreciated; focusing on his entire body of work obscures the value of his batting at key moments in cricket’s recent history.

‘Don’t mention the Waugh’ is a common refrain.

If you accept the latter position, Brian Smith is the reverse Mark Waugh. Focusing on his involvement at key moments in rugby league history obscures his overall body of work.

Smith was always called in to reinvigorate struggling teams and always made a difference. While his record of losing grand finals, English premiership and cup finals is remarkable, the fact his teams had a major final to lose at all is equally remarkable.

I once heard Phil Gould say that the 2005 St George Illawarra Dragons – arguably the best team the joint venture has ever had who were coached by a Smith disciple, Nathan Brown – owed some of their excellence to Brian Smith, a decade after his departure.

Is there something to his reputation as a standard-setter and harbinger of future success?

Smith’s rugby league story started in northern New South Wales, at Maclean and then Casino. In 1973 he came to the attention of St George and quickly progressed to first grade, playing 17 games for the Dragons in 1974 and 14 games for Souths over three seasons.

From a young age, Smith’s analytical bent saw him identified as a future coach. This was the path he took, starting out in the lower grades at Newtown in 1978, before returning to Souths in 1980.

Souths under-23s, coached by Smith and led by young stars Craig Coleman and Mario Fenech, were premiers in 1981. Fenech said of Smith, “Brian had a profound effect on my career… he opened up a whole new game to me. The communication, the skills training, the tactics… it was like another world.”

A coaching star was on the rise and in 1984 the Illawarra Steelers appointed Smith as head coach. The Steelers had won just 14 of 52 matches in their first two seasons and had conceded 24 points per game in 1983.

Smith’s appointment had an immediate effect. The Steelers finished with 12 wins and 12 defeats in 1984, conceded just 16 points per game and finished two points out of the top five. 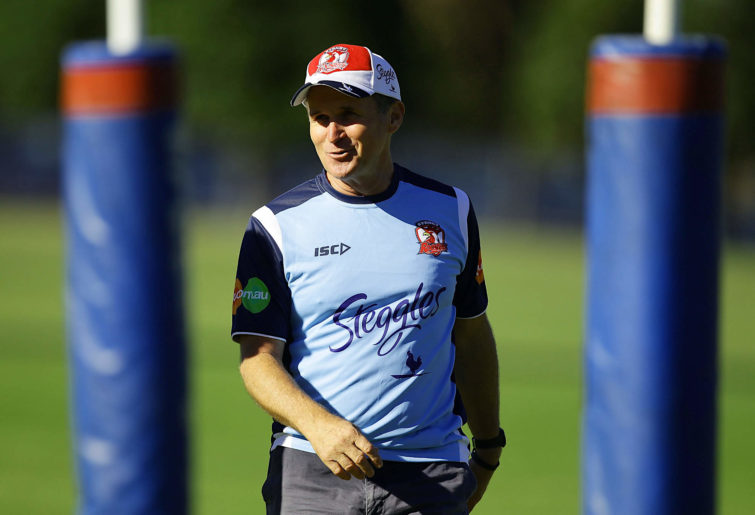 But the Steelers were a project. Smith undertook a significant renovation of the squad, moving on several experienced players and bringing in youngsters like Graeme Bradley, Ian Russell, Jeff Hardy and Craig Walsh.

Smith’s Steelers won just 27 per cent of their matches over the following three seasons and finished last in both 1985 and 1986.

Smith left Illawarra after the 1987 season but is partly credited with laying the groundwork for the club’s best seasons in the early 1990s, including the team of John Simon, Rod Wishart and Paul McGregor that finished third and lost the preliminary final in 1992.

Next stop for Smith was Hull FC in 1988. It’s a period Smith describes as a “confidence rebuilder” after the difficult end to his tenure at Illawarra. The former Hull winger Andrew Mighty described Smith’s tactical nous and teaching techniques as “mind-blowing”.

After struggling in previous seasons, and despite a slow start, Smith’s ‘Airlie Birds’ won 11 straight games and qualified for the 1988 premiership final.

Despite a 10-18 defeat to Widnes at Old Trafford, Hull was back on track. While Smith doesn’t have a premiership to his name, Hull’s 1991 premiership final victory – still the club’s last league title – owed much to him.

Smith had left his league leading Hull team after answering an SOS from St George to take over as head coach in 1991. Hull won the title a few months later under Noel Cleal.

But there was not sustained success. Smith’s Hull had relied heavily on his Australian connections, like Craig Coleman, Jeff Hardy and Greg Mackey. They promptly fell out of contention after 1991 and were relegated in 1995.

It was to be a similar story at St George. Smith immediately made the Dragons competitive in 1991 and began overhauling the squad in 1992, with the signings of David Barnhill and Noel Goldthorpe, and the promotion of Gorden Tallis, Jason Stevens and Andrew Walker.

The Dragons unexpectedly made the 1992 grand final, losing 8-28 to Brisbane, before finishing second in 1993 but losing another grand final to the Broncos after Stevens broke his hand in the first tackle of the game.

An injury-riddled Dragons team missed the finals in 1994 and while the club returned to the finals in 1995, Dragons players were signing on in droves for the rebel Super League. Smith may well have left a legacy at the Dragons, but the loss of players during the Super League war and the club’s subsequent decline makes it hard to judge.

Smith wasn’t around for the club’s glorious run to the 1996 grand final; he’d left to take charge at Bradford. True to form, he immediately turned around their fortunes. The ‘Bulls’ finished third in the league and narrowly lost the Challenge Cup final to St Helens.

Bradford won the Super League in 1997 but, again true to form, Smith had already departed to take charge at Parramatta.

Smith’s time at Parramatta was his zenith. The Eels had been largely irrelevant in the 1990s. After finishing 13th in 1996, Smith took Parramatta to third, before three straight preliminary finals between 1998 and 2000.

The 2001 Eels were, in terms of raw attacking and defensive numbers, one of the greatest teams in rugby league history. They did it with a halves combination of Michael Buettner and an ageing Jason Taylor.

Smith’s Parramatta stint was by far the longest of his career. He presided over the club’s rise and fall over ten seasons and, while there was an unlikely grand final appearance after his departure in 2009, the period between 2010 and 2013 was a dark time for the club.

Between 2007 and 2009, Smith presided over gradual improvement at Newcastle, but it wasn’t enough to see him retained.

Then, in 2010, he took Easts, the previous season’s wooden spooners, to a grand final against St George. It was his fourth and likely last grand final defeat.

After leaving Easts in 2012, Smith has bounced around the rugby league world and, at 67, is unlikely to reappear.

Based on his record, there is little doubt of his ability to reinvigorate a struggling club. His teaching ability and tactical nous probably outlived him at clubs like Illawarra, St George, Bradford and Easts.

Trent Robinson played under Smith at Parramatta and was his assistant coach at the Roosters in 2010.

Smith was a great coach. His biggest strengths may also have been his fatal flaws; the intensity and paranoia that drove the consistency of his teams during the regular season. It just didn’t work in grand final week.