Andy Haden All Black: A legacy as big as the man

I needed a locking partner for Peter Whiting in my favourites team and narrowed it down to three. Ian Jones, Colin Meads or Andy Haden.

Jones was a Northland boy, so he came close, Meads was ending his career as I started following rugby, so that counted him out, but only just! Andy Haden fit the bill as someone who could partner Whiting to his lofty standards.

Peter Whiting is one of the most underrated All Blacks and was a giant of a man. Haden and Whiting had mutual respect I believe and would have formed an imposing middle row. Both intelligent men, they may well have had a lot in common both on and off the field.

Andy Haden was a controversial figure, but you get that when you speak your mind and share what you believe to be the truth. However, he became one of the great All Blacks and his legacy was as big as he was.

Wynne Gray ranked Haden as the 14th greatest All Black in 2014. Some may dismiss him for his divisive opinions but there are many who are offended quite easily. There are those who say he was best remembered for the “dive” from the lineout, but as an all-round rugby player he had few peers.

A magnificent lineout technician, he spent extensive time intellectually and physically honing his art. “I learned a lot from Andy, on and off the field. He addressed lineouts not just as a brutal contest, but also an artform: out-manoeuvring and out-thinking his opponent.

This was something I loved to do, and Andy led the way. It sorted out the skilful thinkers and exposed the rest.” Murray Mexted IRANZ. His exacting standards demanded a lot from his lineout throwers, including Sean Fitzpatrick who was on the receiving end of Haden’s requirements!

Scrummaging also received the same focused attention and he became a powerful scrummager.

Andrew Maxwell Haden was born in Wanganui, New Zealand in 1950. He attended Wanganui Boys College and played senior rugby for Massey University. But he fulfilled a desire to move to Auckland in 1971.

An ambition to be a veterinarian was relinquished when he began studying geology, which Whiting had an interest in too.

Haden joined the Ponsonby Rugby Club and instantly had his car broken into at training. The stolen items were returned to him after informing his fellow players and his vehicle was never broken into again!

Andy Haden was a dominant force for Auckland Rugby and played 157 games for the blue and white hoops. Friend and former teammate, Sir Bryan Williams said “Andy was a very dominant and imposing figure on and off the field. He was at the forefront of so many great championships such as the Gallaher Shield and the Ranfurly Shield.

His All Black debut came in the United States on the way to the United Kingdom in 1972 at the age of twenty one. New York was the venue for the match against New York Metropolitan. Hamish MacDonald and Peter Whiting became the preferred Test locks.

After returning to New Zealand Haden was treated unfavourably by the Auckland selectors, so he and his wife Trecha left for Europe for two seasons. He progressed his game there and returned a more complete player. Some said the reason he was not selected for the 1976 tour of South Africa was as a punishment.

He would have made a formidable pairing with Peter Whiting on tour. He did however go on tour to Argentina after a noteworthy season with Ponsonby and Auckland. He concluded the season by winning the New Zealand Player of the Year award.

Andy Haden made his Test debut against the British Lions in 1977 at Wellington aged twenty six years, a lengthy five years after being first selected. Various influences meant he was not always available, including a suspension and an investigation into his amateur status.

During this time, he established himself as the preeminent lock forward in world rugby, astute, powerful and accomplished.

It was in 1978 that his reputation was elevated or lowered depending on what side you supported. Everyone will have an opinion on the “dive.” The All Blacks were playing Wales at Cardiff Arms Park, with Wales leading 12-10.

According to Haden the Welsh had been infringing at the lineout throughout the match, so he informed his skipper, Graham Mourie he would take matters into his own hands and try and receive a penalty from the referee.

Both Haden and Frank Oliver “fell” from the lineout and the referee awarded the controversial penalty to the All Blacks. Brian McKechnie, who in 1980 would be embroiled in another sporting controversy, calmly kicked the match winning penalty. 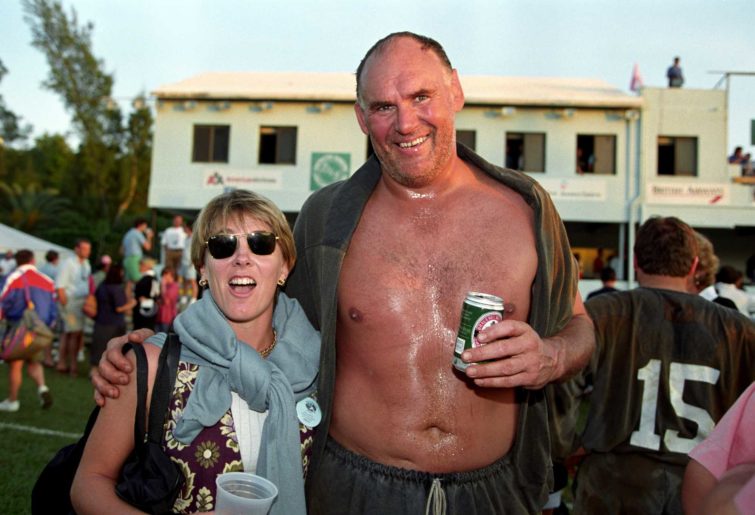 After the match, the referee stated the penalty was for Oliver infringed not Haden, who copped most of the dissension. Haden never denied the tactic had been discussed prior to the match. Alternative methods are used in many sports to gain an advantage or victory, are they fair or sporting?

As an All Black supporter I found the Haden “dive” slightly humorous, but definitely did not see the funny side of the cricket “underarm.” Was the All Blacks win hollow to win in that way? Does it matter? They did win the Grand Slam though! Here are the highlights of the match, including the “dive”:

Throughout the eighties Andy Haden toured the UK, Australia, France and Argentina and played home series against France, South Africa, Australia and the British and Irish Lions. The 1981 tour by South Africa being remembered for the violence and “flour bomb” test.

His last Test was in 1985 against Argentina in Buenos Aires aged thirty five years. From 1972 to 1985 Haden played forty one Tests with eight as captain. In 1986 he retired from all rugby, with Auckland holding the Ranfurly Shield and coming second in the NPC in his last season. He did contribute towards the organising of the rebel Cavaliers tour in 1986.

He divided people into pro and anti-Haden camps because of his forthright views and actions but was never apologetic. Andy became a player and celebrity agent with Rachel Hunter a notable client. He was from an era in New Zealand where if you did not behave you were shown the door, but Haden, due possibly because of his size was able to make comments which upset people. He once declared he would become “rugby’s first millionaire.”

Being so physically and mentally tough he would have been successful at whatever he chose. Haden published his autobiography in 1983, claiming the royalties as he had designated himself as a writer.

Andy Haden was granted the honorary position of Rugby World Cup ambassador in 2010, but resigned the post after making perceived racist and sexist comments. Rugby administrators were often perplexed at his “commercially-minded” attitude which was in support of better outcomes for the players.

His career and influence assisted the push towards the professional era in rugby.

Sadly, Andy Haden died of lymphoma on the 29th of August 2020 at the age of 69. The funeral was held at Eden Park where notable All Blacks spoke in memory of the contribution Haden made to rugby.

NZR President Bill Osborne, an All Blacks teammate of Haden’s said: “Andy’s stature and influence as a player was huge. Not only was he an immense physical presence, but there was also immense respect from his teammates. Most people will remember the way he dominated the lineout as a tower of strength, but I also remember the way he looked after the young players coming into the All Blacks, and how he advocated for players’ rights both during and after his playing career.”

Former All Blacks and Auckland coach John Hart praised Haden’s character both on and off the pitch. “I think he’s a colossus, a legend of the game – both as a player and what he did in leading change,” said Hart, who coached Haden during his career.

“He was a fantastic advocate for players’ rights. He challenged the establishment, and he was a professional, years ahead of his time”. Former All Blacks and Auckland coach John Hart.

Andrew Maxwell Haden left an immense legacy to the rugby world. His contribution paved the way for others and his rugby brain and skills were of great benefit to the All Blacks.

“A genuine rival to Colin Meads as the greatest All Black lock” Peter Fitzsimons.

I found my locking partner for Peter Whiting. Andy Haden, another rugby favourite of mine.