After last week’s victory over Wellington snapped their winless start to the campaign, Steve Corica’s Sky Blues have now made it two on the spin.

Patrick Wood opened the scoring thanks to a well-weighted Max Burgess pass across the goalmouth, before Trent Buhagiar set up Burgess in an identical vein just before the half-hour mark.

Buhagiar got in on the act in the second half as Macarthur’s defence, which had conceded just once from open play this season, was comprehensively outplayed at Campbelltown Stadium.

Sydney were without Bobo and Elvis Kamsoba due to positive COVID-19 diagnoses, while English frontman Adam Le Fondre was also ruled out as he awaits scans to determine the severity of a hamstring complaint.

Wood and Trent Buhagiar were chosen to start up top and after Craig Noone and Moudi Najjar tested Andrew Redmayne early, Wood tapped in the opener in the 11th minute.

Paulo Retre cushioned a through ball into the box with Burgess squaring across the face of goal for Wood to finish from close range.

Macarthur asked questions of the Sydney back four, but were unable to find a way through and with that the Sky Blues needed no invitation to extend their lead.

A miscued pass in the Bulls’ half from Adrian Mariappa was picked off by Buhagiar who burst forward with electric pace leaving the Bulls’ defenders in his wake.

The forward raced to the byline and cut a pass back towards an unmarked Burgess who netted in the 29th minute.

Buhagiar was enjoying some good fortune down the right and that continued in the second half when he delivered a pinpoint cross to Burgess who was only able to flash his header to the side of the post.

Buhagiar made no mistake a few moments later when he slotted a cool finish in the 59th minute to put the game beyond doubt.

A corner deflected Wood’s way and the forward skimmed Noone at the byline before steering a pass back into heavy traffic.

Buhagiar was on hand as the pass fell in his direction and the Sydney forward made no mistake to fire past Nick Suman and make it three.

Sotirio at the double as Nix triumph in Campbelltown

Jaushua Sotirio has overcome a first-half blooper reel to score a brace and earn Wellington Phoenix a 3-1 win over Macarthur FC. The maligned… 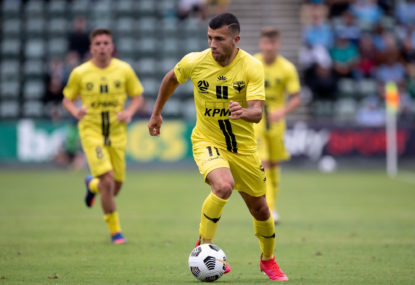 Sotirio at the double as Nix triumph in Campbelltown