My other gig is American collegiate gridiron football, for which I do much the same thing – except there are 418 teams to follow! With the final championship game taking place Monday night – the Universities of Georgia defeated the U of Alabama 33-18 for the top-level college football playoff title – it’s time to switch my body clock once again and get back to my primary love!

Week 1 of the AFLW season went almost exactly as expected – I was able to sneak our first-round picks into the comment section of our beloved colleague Avatar’s preview article just before the first bounce of Richmond’s romp Friday night – and like most prognosticators we went seven for seven on winners. The only miss most folks made was not unreasonably picking Brisbane to defend their title on Saturday.

On our wagers against the published point spreads we managed to sneak in four winners out of seven games when the Giants failed to push a ball through the sticks over the last five minutes late on Sunday. Frankly, for a rusty first week, we’ll gladly take that record!

Following Football has traditionally been above the 54 per cent success rate required to break even wagering – allowing for the casino cut that comes from paying out $1.90 on even-money $1 bets – over the course of a season. This is where we insert our usual disclaimer that personally we never wager actual money on any sporting events out of personal preference and refuse to recommend that you do. You’re free to do you of course, and if our forecast plays a roll in guiding your hand, that’s up to you.

After an already readjusted Round 1, it’s clear we’ll have another seat-of-our-pants season, and there will undoubtedly be a week or three where the games we’re picking don’t end up matching the reality that plays out on the weekend. By now we’re probably all getting used to that – believe me, it’s no better in the States. Any sports season that reaches its finals with something resembling a fair and complete schedule in 2022 should be considered a success. 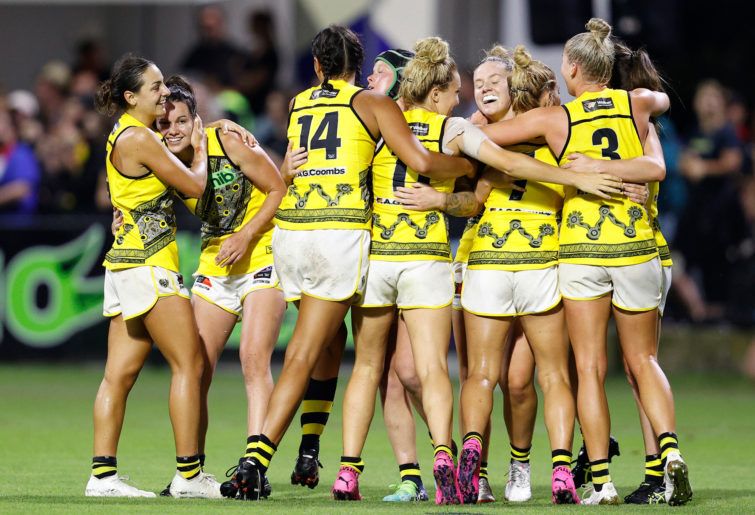 Richmond players celebrate their win after the round one AFLW match against St Kilda. (Photo by Darrian Traynor/Getty Images)

So let’s look at AFLW Round 2 with the current ELO-Following Football ratings we have attached to each club at the moment – note they’re highly flexible in the early stages. Remember, as always, 50 is the median rating in every league we monitor.

The Tigers and Demons were two of the five teams that not only won as forecast last weekend but also covered the published point spreads, and they each improved their ELO-FF ratings by outperforming our expectations as well. But despite Melbourne’s lack of finals achievement, they’ve still accomplished far more in the AFLW’s short history than Richmond, who improved their all-time record on the distaff side to a daunting four wins alongside 12 losses. It’s going to prove to be Richmond’s best year yet in the AFLW, but they’re not yet ready to challenge the top dogs in the league.

Conversely, the Saints have to be disappointed with their start to 2022: a six-goal loss to a team they had run fairly even with last year. In their only previous meeting, during the last completed round of 2020, the Saints held the Tigers goalless in a 42-3 rout. Now they sit well behind the Richmond gang and must face one of the clear favourites in the competition, a Collingwood bunch that got a pair of late gifts against Carlton to put two goals between them on Sunday en route to a mere three-goal win. It seems as though the Pies will be anxious to prove they’re still capable of winning it all this year and will want to pile on the Saints when they can.

Had Greta Bodey not put one of her four kicks through the big sticks early in the fourth in the grand final rematch on Sunday afternoon, Brisbane might well have been the first AFLW team to ever possess a single-digit percentage – a 39-3 loss would’ve given the Lions a percentage of 7.7 per cent; the Crows would have entered Week 2 with a 1300 per cent mark. As it is, they sit in dead last after one week and will be eager to put a W on the board playing in Queensland. If Carlton have learnt some lessons from their traditional Round 1 Ikon Park match-up with the Magpies, they’ll be able to stay with Brisbane and even take the four points with a break here or there. We’re going to assume that at Maroochydore the key break falls the way of the crimson and not the navy blue.

The drawback with playing in the men’s arena is the continued disparity in crowd size, especially when your team has a three-year historical record of 6-16 while your men’s club has made finals in 15 of the last 16 years. You lose much of the feeling of crowd support because they’re so spread out around you. But it’s hard not to take advantage of a top-notch facility in your backyard, and frankly I’m not personally familiar with the alternatives in and around Geelong proper. Nevertheless, one suspects the wildly popular Doggies will have its own vocal support in the building and that distinction may well prove the difference between winning and losing in Round 2 this season.

Prediction: Western BUlldogs by one.

Were this match-up in Western Australia, we’d be picking the Eagles by 20 or so. As it is, considering one of West Coast’s two wins last season came by a single point over winless Gold Coast and one of the Suns’ only two wins in their history was a 33-8 rout of the Eagles in Perth, we’re expecting a great deal and very little from this match-up – a great deal because both teams will enter this game thinking it’s a winnable occasion early in the season and very little because their historical records suggest that this may be a rather shallow high point to each of their seasons.

On the other hand – paw, claw – this could be a finals preview, although despite their mutual success, these two powerhouses have never met in finals play. Their most recent clash was actually almost two years ago, in Round 5 of 2020, when North demolished the Crows 63-21 behind multiple goals by Kaitlyn Ashmore and Jasmine Garner, both of whom starred for the Roos against the Cats this past Saturday. It’s hard to deny that Adelaide looked far better than North did in their demolition of defending champions Brisbane Lions in their opening foray into play this calendar year, and thus it’s hard to go against the rating expectations that give a prediction of an uphill battle this time around for North in its attempt to go 2-0 in Adelaide’s back yard. 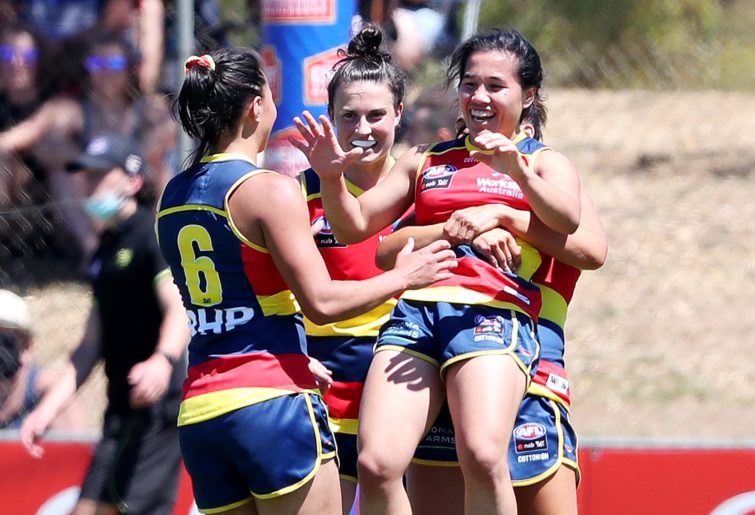 Two original-eight clubs, they’ve struggled along side by side in their first two seasons of 2017-18, each winning fewer than they lost and producing the very first draw in AFLW history in their first-ever meeting, Round 3 of 2017. Then Freo began a string of three straight six-win seasons, not coincidentally in the same year Kiara Bowers began playing with the club in AFLW competition, making finals each season. Meanwhile GWS have gone 10-12 with one token finals appearance entirely thanks to the liberal rules installed at the start of the pandemic in March 2020.

Both clubs had reasonably solid wins in their openers, defeating the two teams in the warm-up game on the Whitten Oval double-header on Sunday. And just as West Coast is a distinct favourite on the undercard, their western partners are the distinct favourites here.