Rassie moves fast. He was a fast flank with a late offload. When he broke a foot, he retired quickly and became a coach. He has made big career moves with an abrupt rhythm. Right up until he leaves, he promises he’ll stay.

Famously, he took on an ailing Springbok squad which had managed to lose matches with (English) cricket scores, fail to transform, and not even be seen as physically confrontational, and in the space of two short seasons, won the biggest prize in rugby with a comprehensive victory over a strong England in the final of the 2019 World Cup.

Infamously, he bullied the referees of the 2021 Lions series with an hour-long video which put officiating under the hot seat, by forcing Nic Berry to admit he made 14 errors hurting the Boks (presumably, he made a few less errors harming the Lions, but defending himself from the claim of too many errors by admitting to a lot more was unpalatable).

In search of an elusive magic compromise, the powers that be ended up pleasing nobody with a bitter, drawn out quasi-legal proceeding, resulting in a long ban of Rassie (first from all rugby work, and then from stadia and games, until after the summer tours).

He has since apologised to Berry. Neither the apology nor the acceptance thereof felt sincere, as Berry has continued to lament the fallout, and Rassie has hardly struck a penitent pose.

However, the world moves on, including World Rugby, and reigning champion Rassie has accepted his penalty, with work to do and a World Cup in France less than 20 months away.

And this week Rassie returned to work.

On his enforced hiatus, Rassie started to tweet. About his dog, Frank, an English bulldog: his agility, speed, and immigration status. He showed Frank licking a bowl of chocolate ice cream clean. Frank was depicted trying to climb onto a sofa, and failing. 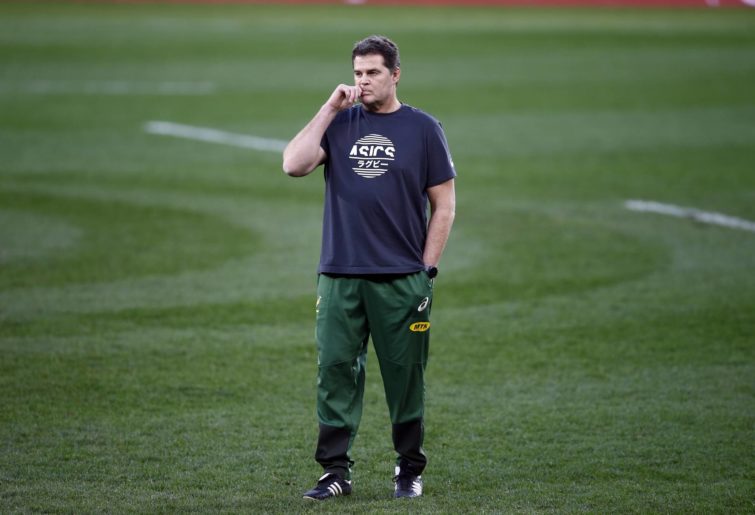 During his 60-day work ban, he went from no followers to 80,000, and seemed to be in a very good mood. Rassie still only follows one other Twitter account, that of Augustin Pichot.

Rassie is a self-avowed workaholic. Since 2004, he has been a coach’s coach, a technical advisor, a director, a student and researcher, and a pioneer of statistical analysis in rugby. Very rarely has he had 60 days to think through, instead of at, rugby problems and solutions.

In each case when he jumped from a job to a new position, he brought a new energy and mindset which the locals enjoyed.

Yes, he has been a Twitter entertainer for a couple of months, but you can be sure of one thing: he also spent large chunks of time thinking of how his beloved Boks can repeat as World Cup champions.

He personally owns a massive swath of South African rugby intellectual property, because of his negotiation ability leading into being the head of high performance (before he went to Munster and amassed a library of curated stats on European players and playing style).

Thus, when he wasn’t directing documentaries of his bulldog or mum, he could have just as easily been spotting trends in a vast repository of numbers of Bok players and hopefuls, and keeping a close eye on dozens of his squad playing abroad.

South African fans, for the most part, accept Rassie made a mistake but also accept him as the most influential local coach of his generation, one who led transformation to be a reality (it is now not a news story when eight of the starting Bok fifteen is not White), and worked a modern day miracle from the sixth-ranked 0-57 Boks of 2017 to the 32-12 Webb Ellis Cup holders of 2019, Lions series victors of 2021, and still number one-ranked in the world.

Make no mistake: Bok fans are not the easiest community to please. Be a bully, sure. But don’t lose often, and don’t make excuses, even if they are valid.

Rassie’s friend and protégée Jacques Nienaber was seen as in over his head after two straight losses to the Wallabies in Australia. It did not matter to his home fans that the Boks had been in a bubble, and had a very short break after a next level brutal Lions series. The two close Tests against the All Blacks gave him a reprieve, and then he came one kick away from an End of Year Tour sweep.

Rassie will know that five losses will keep Nienaber on the hot seat, even if only one of those was a real hiding (the second Australia win). Significantly, Rassie did not make the trip to Queensland, and was not at Twickenham for the two most galling losses.

The sense for most in South African rugby is Nienaber is not the finished article and Rassie is needed, even if more for his man management skills, ability to find external and internal motivations for the wide array of cultures in the Bok squad.

Nienaber is a technocrat, with a scientist’s mind and an almost clinician’s taste for analysis. After Australia beat South Africa (badly) the second time, Bok fans wanted their head coach to be visibly angry at himself and his team. Veins needed to pop.

Rassie is more of a maniac after a loss, a celebrant after a win, and is known for challenging his team individually to front up.

When he came to Munster, his players were taken aback when, after a loss, Rassie would wonder if they cared, and called them out by name as not seeming to be upset enough.

But the same spirit of stubborn intensity bred the 2021 mistake. Rassie lost some of the plot. He did not need to go as far as he did: the Boks were the better team in the midfield, number nine, and second row, even if the bubble and empty stands and almost total lack of fitness erased much of that margin. He could have made a quieter fuss of the Berry-Jonker error rate, shone a spotlight on the Lions’ clean out regime, and still squeaked out a series win.

He did not trust the system. And we have to, in a sporting code.

So, what kind of Rassie returns? What do Bok fans want? Will they want a chastened Rassie? No, not really. Most see him as a clever coach, a bit wild, and ready to fall on his sword for his players, team, and country.

They just want him to stay out of bad trouble, and get into all kinds of good trouble. They want him more involved than in the Rugby Championship and autumn tour, but not a waterboy, either.

Somewhere in the middle. Integral, knee deep in Bok world, kicking arse, but not a distraction to the players.

They want to see Rassie’s next innovation, born of a 60-day sabbatical, fed by chocolate ice cream, washed down by brandy wine, danced into reality with a Dezemba shuffle from Despatch, and double-checked with the stats they know he has on his laptop, the same laptop he was zooming into the coaching box during the win over the All Blacks.

One thing Bok fans want to see is whether a younger fullback can emerge from rapid Aphelele Fassi, skilled Warrick Gelant, disappointing Damian Willemse, or using Cheslin Kolbe at 15. France in 2023 seems a bridge too far for Willie le Roux’s shot confidence and Frans Steyn’s big aging body. Rassie and Nienaber need to answer this question above all. The next issue is whether a phase attack can be used more, or will the chase and percentage be the game plan for the next two years.

They want to see Nienaber solve the Wallaby puzzle: the only team in ages to score tries at will on his defence. But they are not ready to see the end of Rassie.

In 2022, Bok fans want to see a clean 3-0 sweep of Wales in June to set that rivalry right: back to a clearer superiority.

A South Africa A team will also get to play an opponent to be named during June. This gives the coaches a perfect chance to look at smarter backups at No 8 than Jasper Wiese and bigger loosie understudies than Kwagga Smith, who simply lacks stopping power against big backs like Samu Kerevi.

In the Rugby Championship, a split with New Zealand is now seen as the “floor,” and South African fans will want to run the table, with revenge over Dave Rennie’s improving Australia.

An EOYT is always rough, and 2022 is no exception, with 2023 pool partner Ireland, Cup fave France and that old England set as opponents (with the last Test outside the window, meaning only South Africa-based players can be selected for Twickenham).

Rassie is seen as a difference maker on tour, when it is less about technical aspects and more about heart and fire.

This is Act II after a long and frustrating intermission in a strange tragicomedy. South Africa’s favourite rugby rascal is back. Every family has an uncle just like him, and they seem to survive and in the end, after all, after sinking the boat and burning the garage making a meat smoker and alienating the neighbours and going to see the judge about that thing, the old bugger ends up being the one you can’t live without.

The rest of the neighbourhood seldom agrees. But Bob’s your uncle. Rassie’s ours.